Churro Toffee is a copycat Disneyland recipe that tastes just like the one from Pooh’s Corner in Critter Country. Get the buttery, sugary, chocolatey, cinnamon magic that is Disney Churro Toffee right in your kitchen today!

If you love copycat recipes, then you’re going to want to make my Red’s Apple Freeze, Galaxy’s Edge Blue Milk, and my Knott’s Berry Farm Buttermilk Biscuits right away! 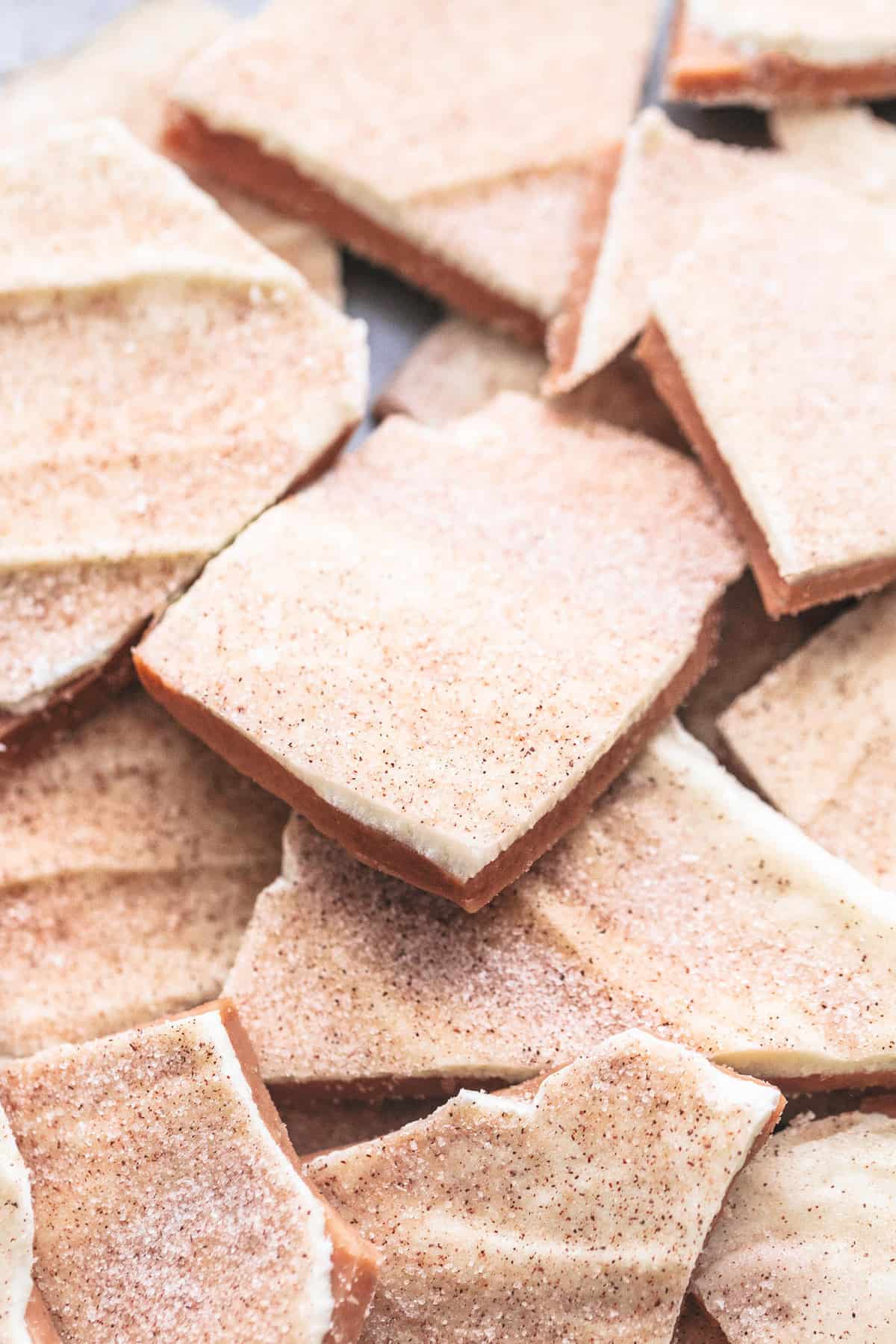 There’s no secret that I love all things Disney. A fan since I was a child, I just can’t get enough of Disney movies and magic. I grew up watching and rewatching all the Disney movies even before I had kids. Now that I have three of my own, I’ve found I love them even more.

My husband and I took the kids to Disneyland last month for some more of that magic (and food!). We went all around the park, tasting and sipping and watching and riding and laughing and generally trying to soak up as much of that Disneyland magic as we possibly could, body and soul.

While all of their treats are tasty, one in particular stuck out to me: The Churro Toffee that’s only sold around the holidays. We discovered it at Pooh’s Corner in Critter Country and couldn’t get enough. (We may have even gone back for seconds.) When I got home, I couldn’t stop thinking about it so I developed my own recipe for it of course. Now I can eat it year-round!

The only difference between this Christmas candy version I’ve created and the churro toffee recipe at Disneyland is that theirs is served in a block that’s completely wrapped in white chocolate. I decided to do mine in a single layer for convenience and so that it’s easier to share. This recipe is so easy to make that you don’t even need to get out a candy thermometer, and is a spinoff of my Easy Homemade English Toffee recipe. 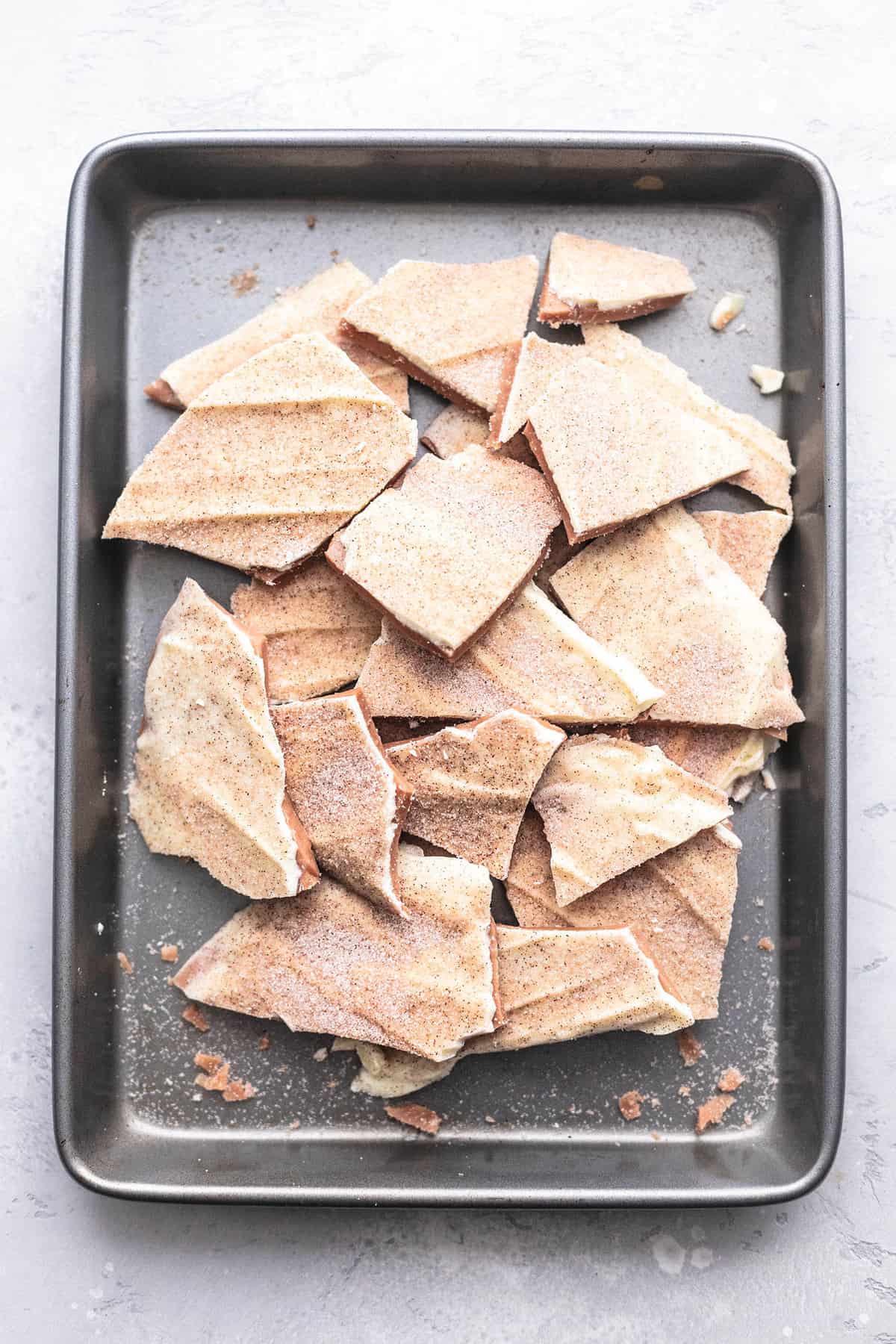 WHAT IS A CHURRO MADE OF?

A churro is a traditional Spanish and Portuguese dessert that typically look like a fried, long, twisted donut. They can be straight, curled, or twisted into a spiral. The dough is made from a mixture of flour, water, and salt, which is then fried and dusted in cinnamon and sugar.

They are eaten for breakfast or a snack in Latin American cultures. They can also be found at carnivals, fairs, cultural celebrations, and my own personal, local favorite haunt: Costco. 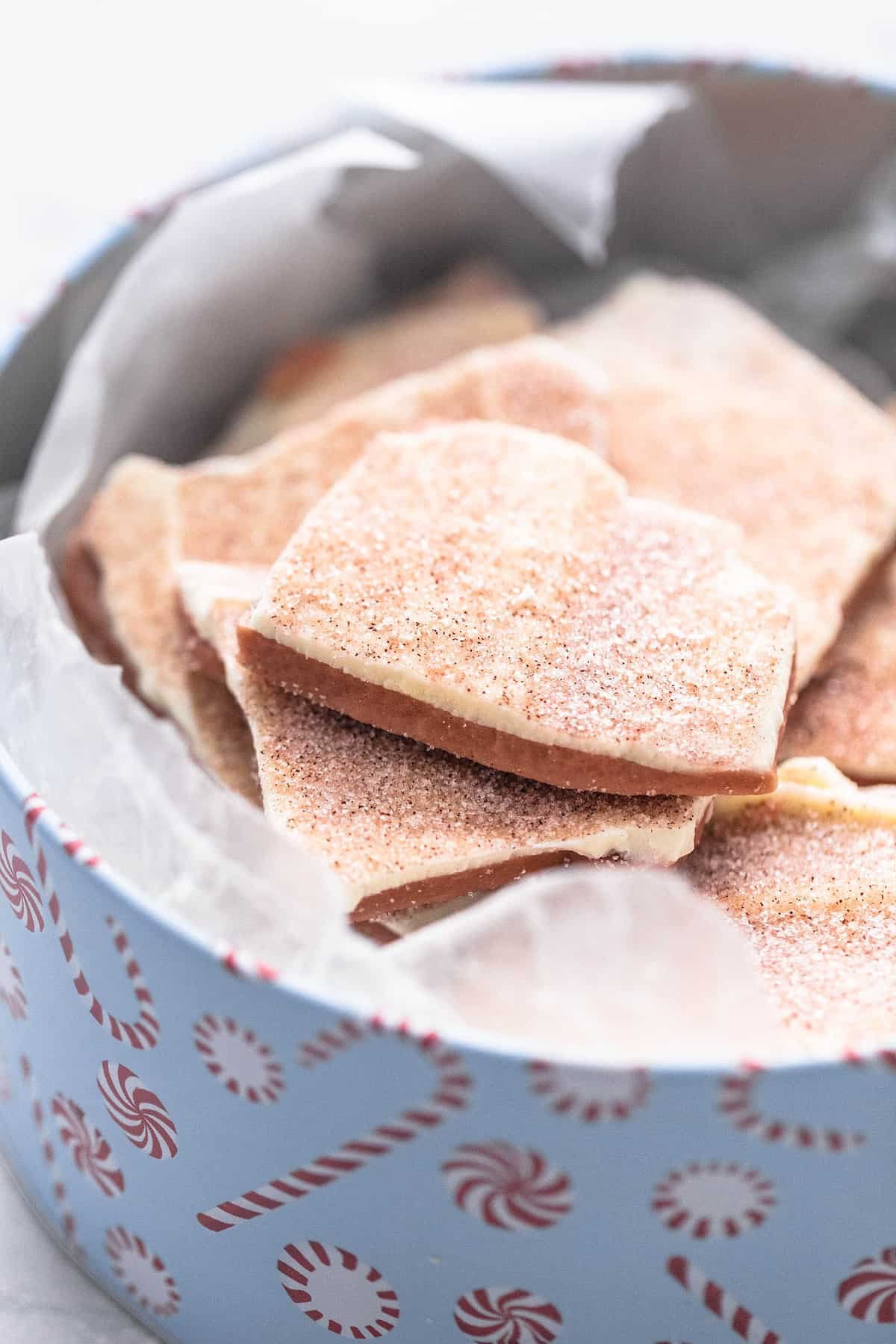 HOW DO YOU MAKE CHURRO TOFFEE?

When making any candy, and in particular this Christmas candy, it’s best to have all of your ingredients measured out and set out in front of you and ready to go as it can be a quick process. You really need to keep your eye on this cinnamon sugar toffee, and work fast. Don’t worry, it’s totally worth it!

That being said, you should have in front of you and measured out before you start cooking: the butter cut into 1-inch cubes, the sugar (both measurements), salt, vanilla, white chocolate chips, and cinnamon.

Have a baking or cookie sheet (one with sides) set out nearby. Stir together the three tablespoons of sugar and the cinnamon and set that aside.

Next, find a large saucepan (2 quarts or more) with a thick bottom so that your candy won’t burn). Add to it the cup of granulated sugar, butter cubes, vanilla, and salt over medium heat, and start the stirring process (you’ll be stirring throughout — so don’t leave your oven while the toffee is coming together.

Once everything is melted, keep stirring and put the heat up to medium-high in small increments. Stir, stir, stir some more as you raise the burner temperature up slowly. You’ll be stirring an additional 10-15 minutes until the toffee reaches a golden brown color. The color will look like raw almonds when it’s done. When it reaches this color, pour the toffee out into your baking sheet.

Let the toffee cool completely from here. If you want to speed up the process, you can put the baking sheet in the fridge or freezer for a few minutes. Once it’s completely cooled down and hardened, take a butter knife and break it apart. Store it in an airtight container, parcel up for gifts, or serve it right away for dessert (or whenever you need to eat that Churro Toffee). 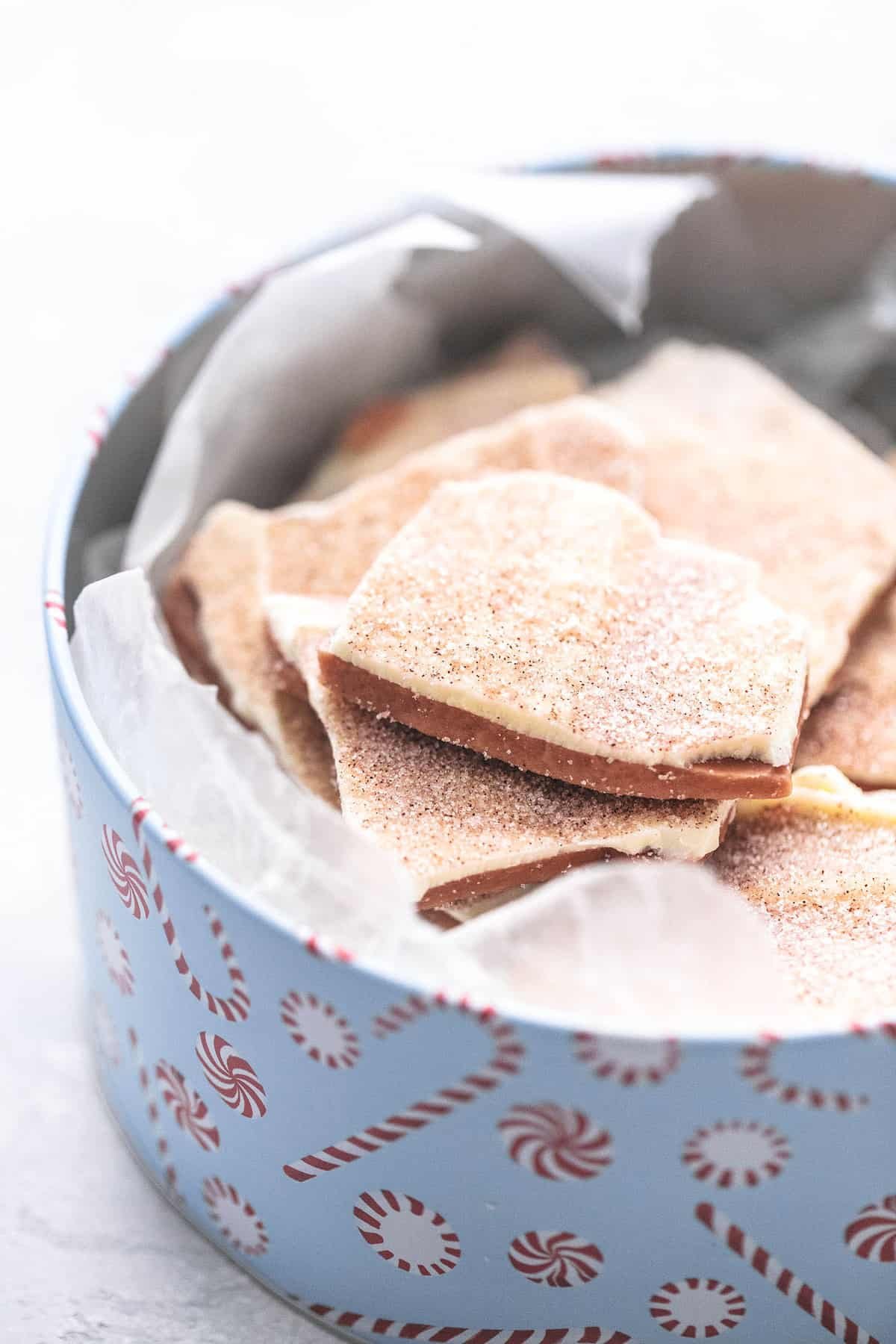 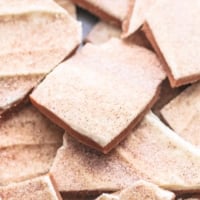 Stores well for at least 1 week in an airtight container.