This easy, healthy, Salmon in Creamy Sun Dried Tomato Sauce goes from skillet to table in 30 short minutes. It’s a dish your entire family will want to devour and makes a great weeknight dinner. 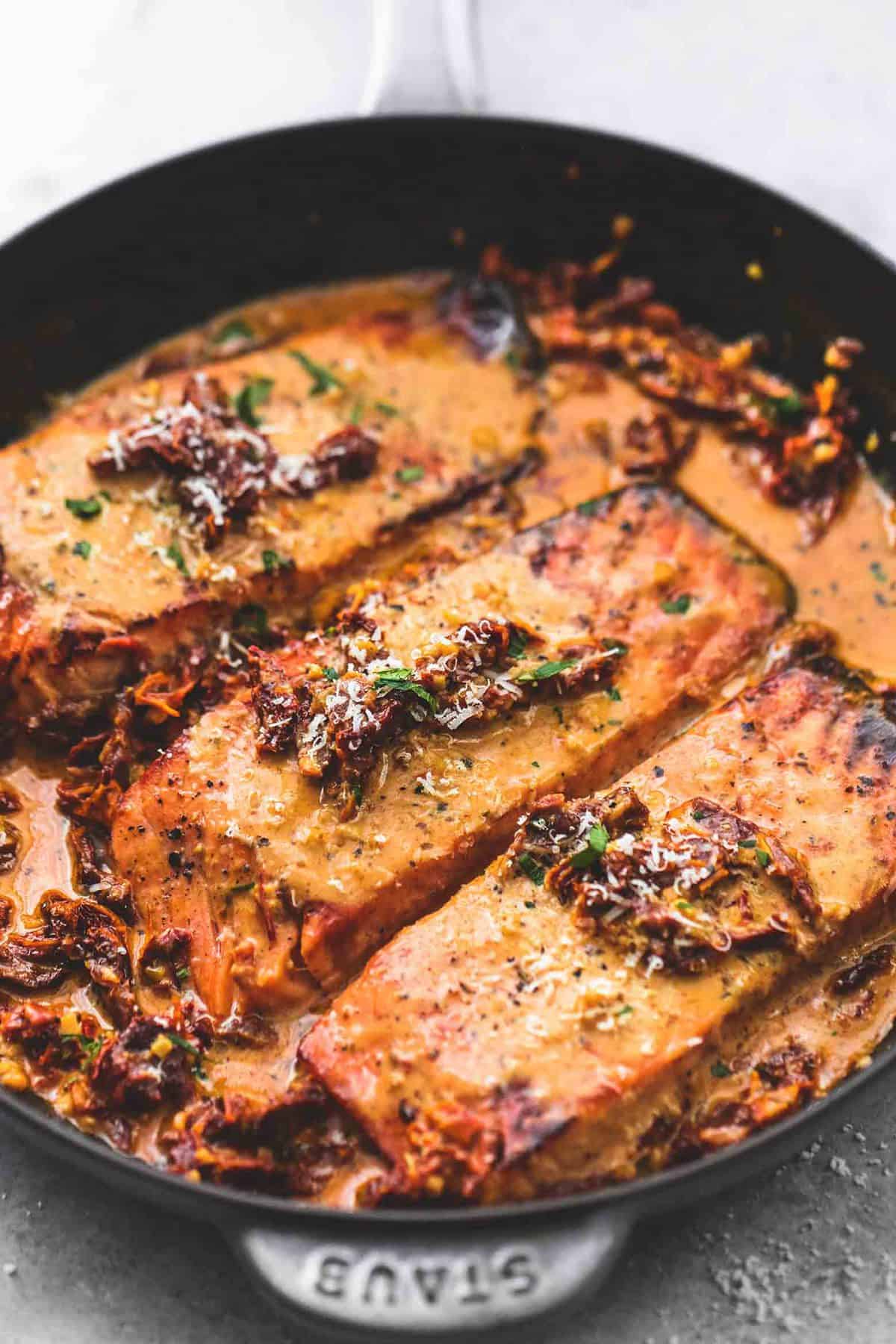 This might be a weird way to start this blog, but hear me out: You aren’t going to believe this but I didn’t realize how monochromatic this dish was until I went to photograph it. Not that that matters. It doesn’t deviate the deliciousness of this dish one bit. It’s just one of those random home-chef moments that tickles me. Like, how could I make this entire dish and never once realize I was apparently (subliminally?) going with a color palette that was all the same? And yet…it’s quite nice, right? As someone who tends to eat with her eyes first (but don’t we all?) I’m surprised that I didn’t notice this as I was putting it together. Or…maybe I DID notice it somewhere deep down in this brain of mine but it just didn’t surface.

Regardless. This train of thought you probably think has to do with nothing. However, I think serendipitously does! Because if I had noticed, I might not have paired these three ingredients together. I might have, for instance, used a green pesto sauce instead of tomato sauce. Or maybe some fresh herbs like dill or rosemary. Or I could have even gone white sauce. All of which, I might add, would have been delicious in their own right. 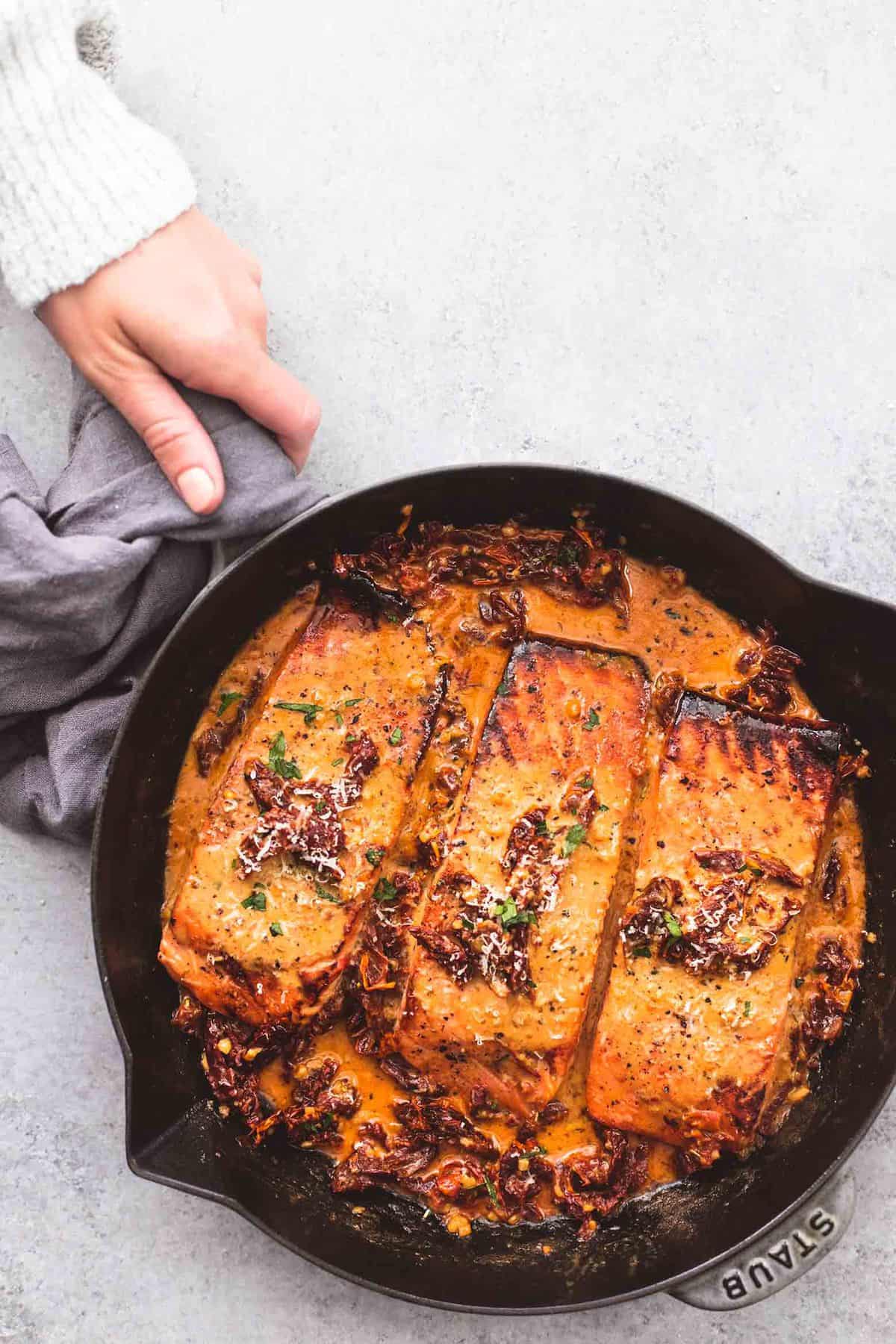 But then, I would have been denying you (and myself) of this easy, creamy, tangy, melt-in-your-mouth salmon dish that has now pretty much taken first place in my heart as the best creamy-tomato-salmon-dish I’ve ever created.

I am fairly certain you will agree. But if not, that’s okay too. I have plenty of other salmon dishes from which you can choose. You’re sure to find a favorite! 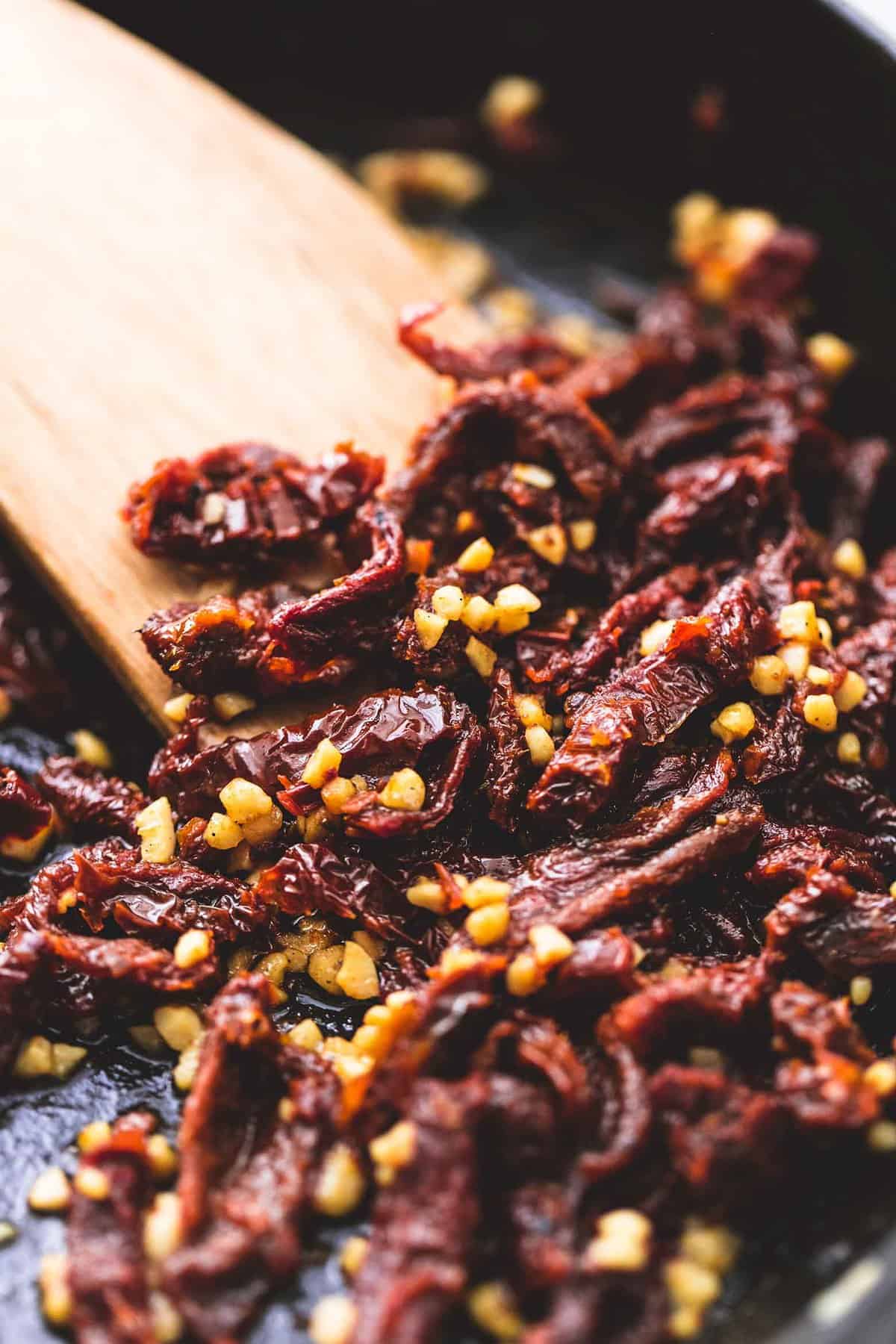 WHAT ARE SUN-DRIED TOMATOES?

Sun-dried tomatoes are exactly what they sound like — tomatoes that have been dried out in the sun. Like any other kind of dried fruit, like an apricot or raisin or craisin. It just maybe seems kind of weird because we don’t usually think of tomatoes as a fruit (but they are) or as something you’d eat dried (but we do).

When they are dried out, they retain their sweetness but also gain a little tartness. Like dried spices, dried tomatoes become more potent. Therefore, you only need a little bit in your dishes to give them a whole lot of tomato flavor. Kind of like tomato paste in that they are both a concentrated tomato flavor. Similar to other dried fruits, they are chewy if they are not rehydrated (as I do in this recipe with the liquids added in the skillet with them).

I use the kind packed in oil in this recipe because they cook up faster when they’re already semi-rehydrated and they’ll be less chewy but just as delicious! 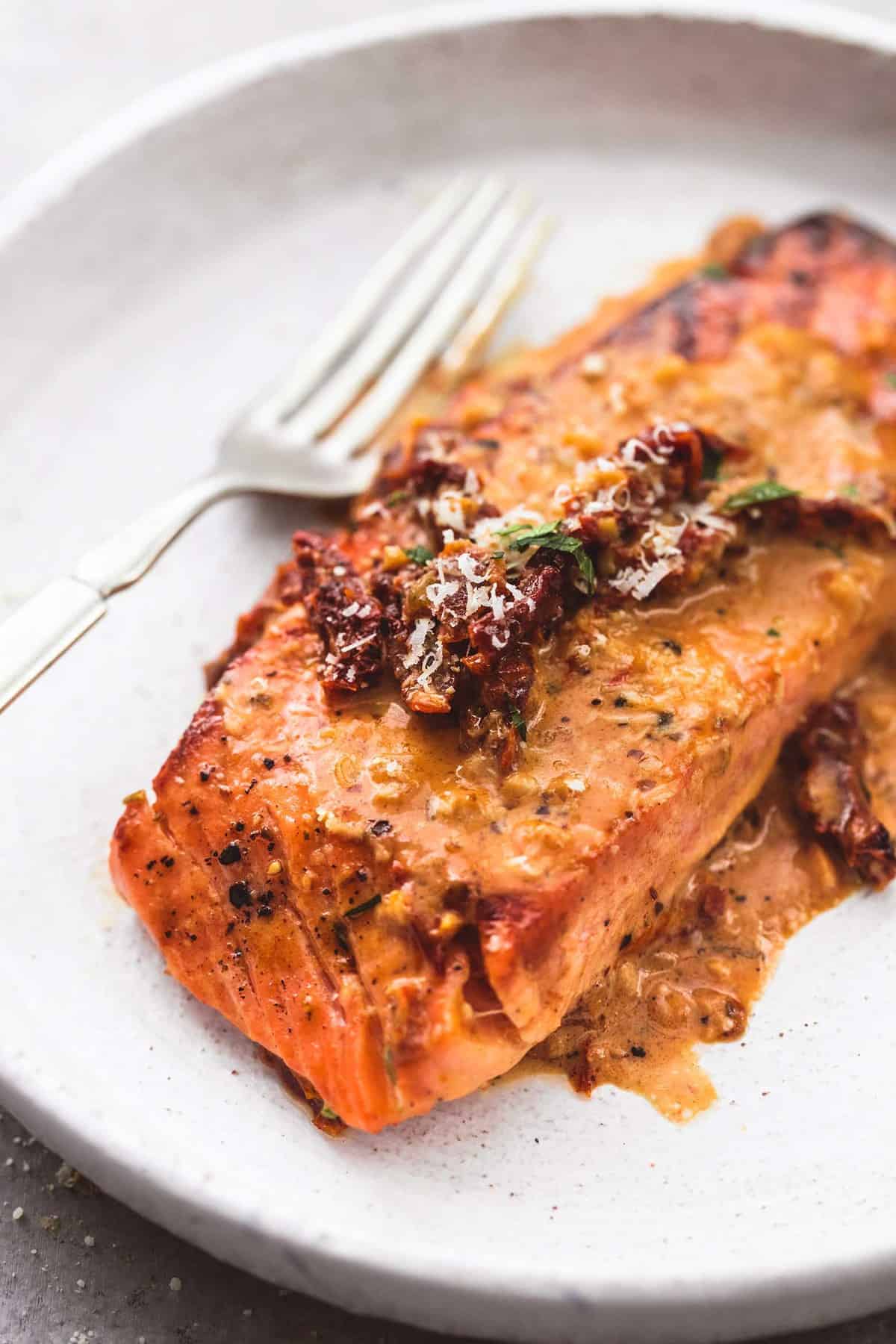 HOW DO YOU SERVE SALMON?

I like to serve salmon with a rice, pasta, or another grain. Especially when there is a yummy sauce — I just have to have something to soak up that sauce. I cannot let it go to waste. Plus, it’s so easy to put the salmon right on top of a bed of white or brown rice or some wide-egg noodles or angel hair pasta and spoon the sauce right over the top.

If you are eating low-carb, you can try this salmon over zucchini (or other veggie) noodles, or over cauliflower rice. You could also try another grain such as quinoa, millet, or barley for some added nutrition. 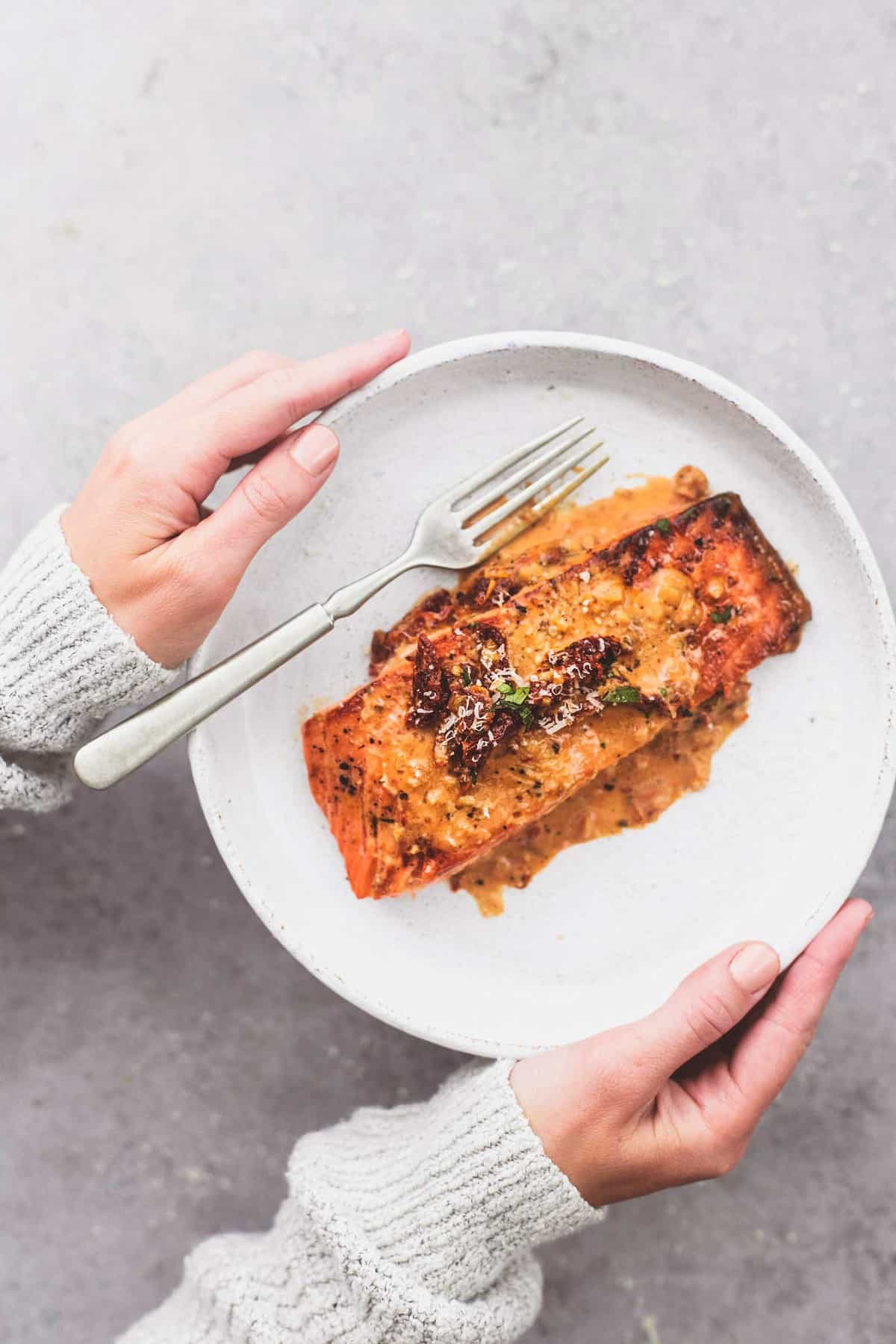 Yes, salmon is a fish but it isn’t at all fishy. It’s thicker and meatier than a lot of fish and it has a very mild flavor that easily takes on whatever flavors you’ve marinated, dry rubbed, or sprinkled on. It’s a very versatile fish and that’s part of the reason I love making it so much, and also, I just love, love, love its taste and texture. 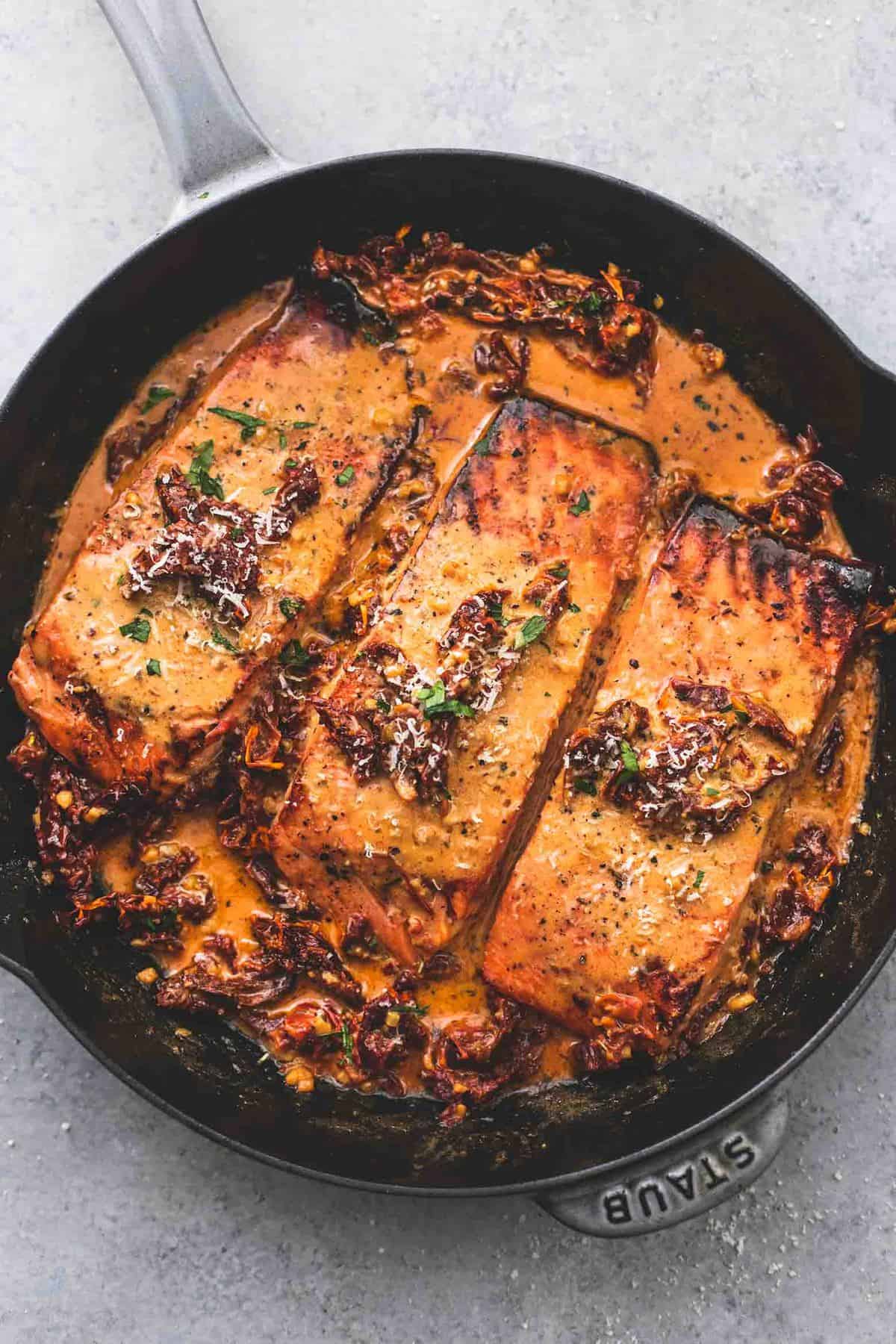 “Absolutely sublime! I already had salmon with the skin on, so I made sure that stayed crispy and kept the sauce on the underside only. I also omitted the honey. Served with mashed potato and steamed broccoli. This recipe is a keeper!” – Liv

“I have been looking for a good salmon recipe and found this to be excellent!” – Barbara 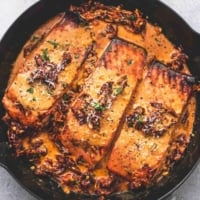 Course: Main Course
Cuisine: American
Author: Tiffany
Did You Make This Recipe?Tag @cremedelacrumb1 on Instagram and hashtag it #cremedelacrumb!