If you love Thai dishes too, then you should also try my Thai Coconut Curry, these Thai Curry Steak Noodle Bowls, or this Sheet Pan Thai Glazed Salmon. 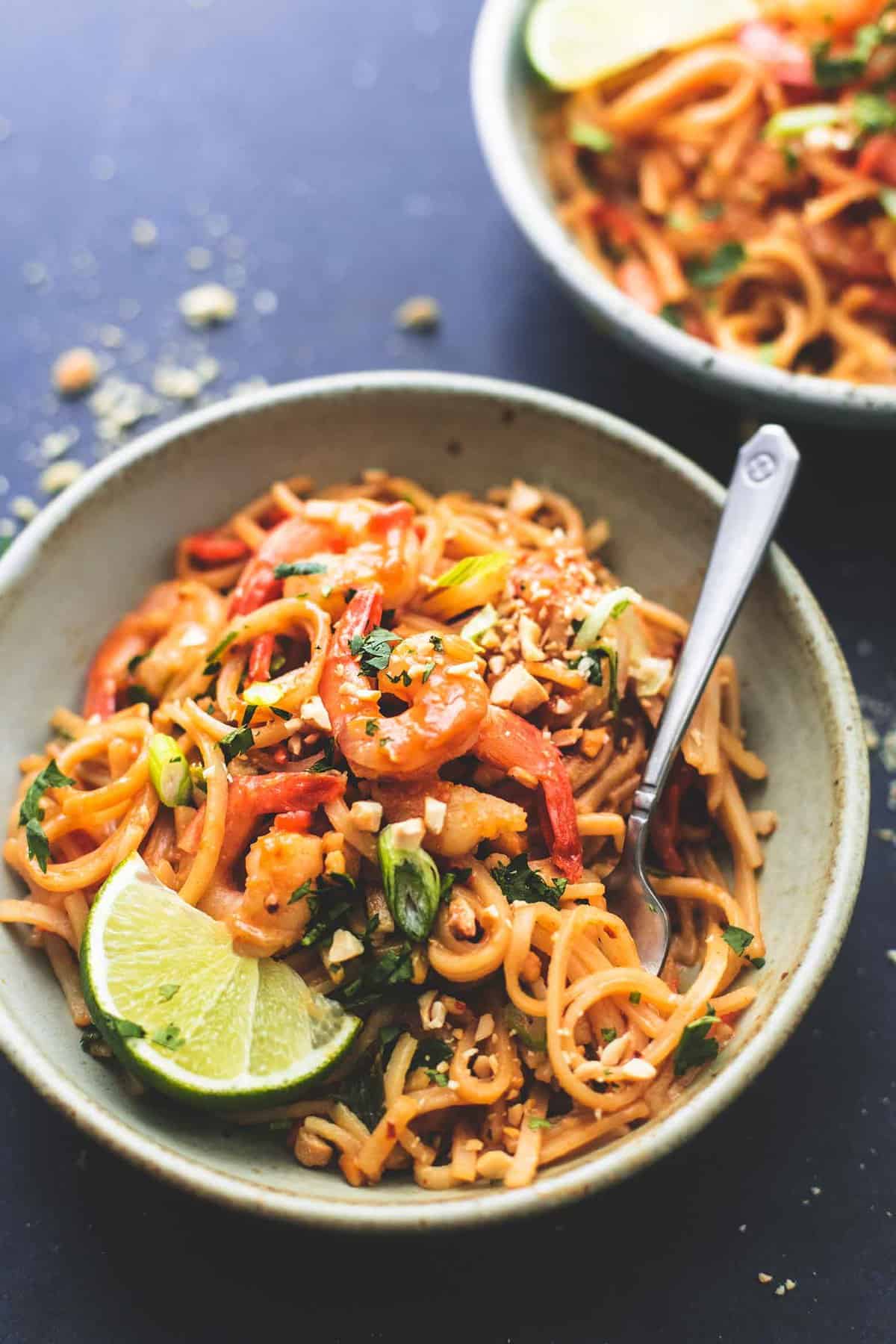 My track record for ordering takeout has taken a steep plummet in recent years. I think once you realize how much easier and better for you it is to make your own favorite Asian dishes, you just naturally want to try them at home again and again. Plus you don’t have to go through all the awkwardness of requesting customizations – at home you can make it exactly the way you like it. A little spicier? No problem. More veggies? You bet. Extra lime wedges? Hey look at that, there they are on your kitchen counter practically begging for a good squeeze.

The inspiration for this dish comes from my brother. He loves Shrimp Pad Thai so much, I tease him that he should marry it. One time, during the teasing, he joked around that he’d like to see me make a Shrimp Pad Thai that was as good as the one he ordered from his favorite Thai takeout place. Not one to turn down a dare, I gladly accepted the challenge.

Let’s just say I had it down enough after three tries to offer it to him. We even went so far as to do a blind taste-test, with mine in one bowl and the takeout in another. We blindfolded him and let him take bites of each, and what do you know? He thought mine was takeout! His most favorite ever takeout and he couldn’t tell the difference.

If my discerning brother can’t tell then you know it’s good! 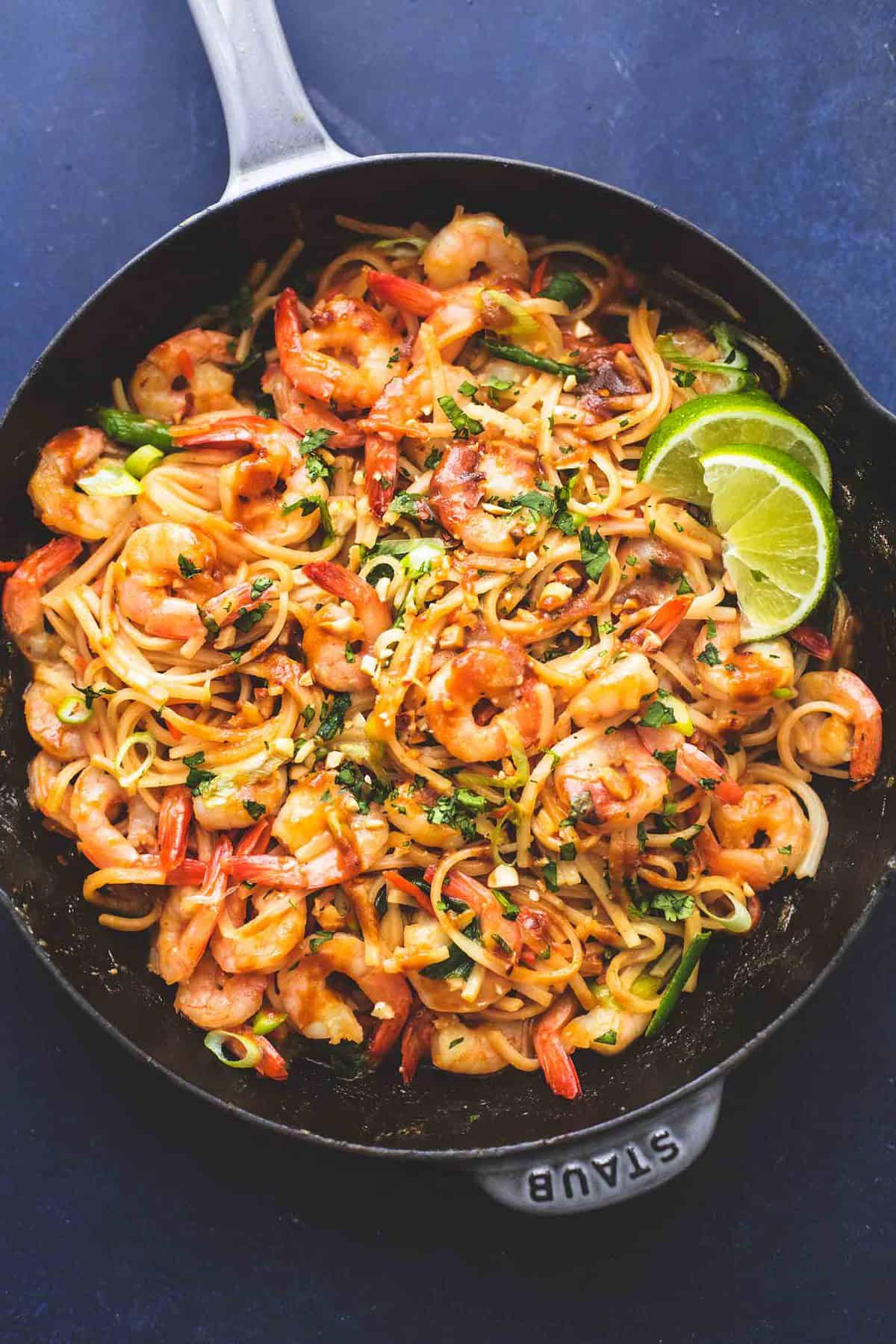 WHAT IS PAD THAI?

Pad Thai is super popular, and for good reason: Not only is it a common food found on the streets of Thailand, but it’s also one of the most requested dishes at your favorite Thai chain. It’s tasty because it’s got a bit of everything — eggs, noodles, veggies, savory and sweet sauces, etc. — and it’s so flexible. You can make it with shrimp, chicken, beef, pork, tofu, or no protein at all. Plus all the various textures — crunchy, soft, chewy, hard — give it a great mouthfeel in addition to great flavor. 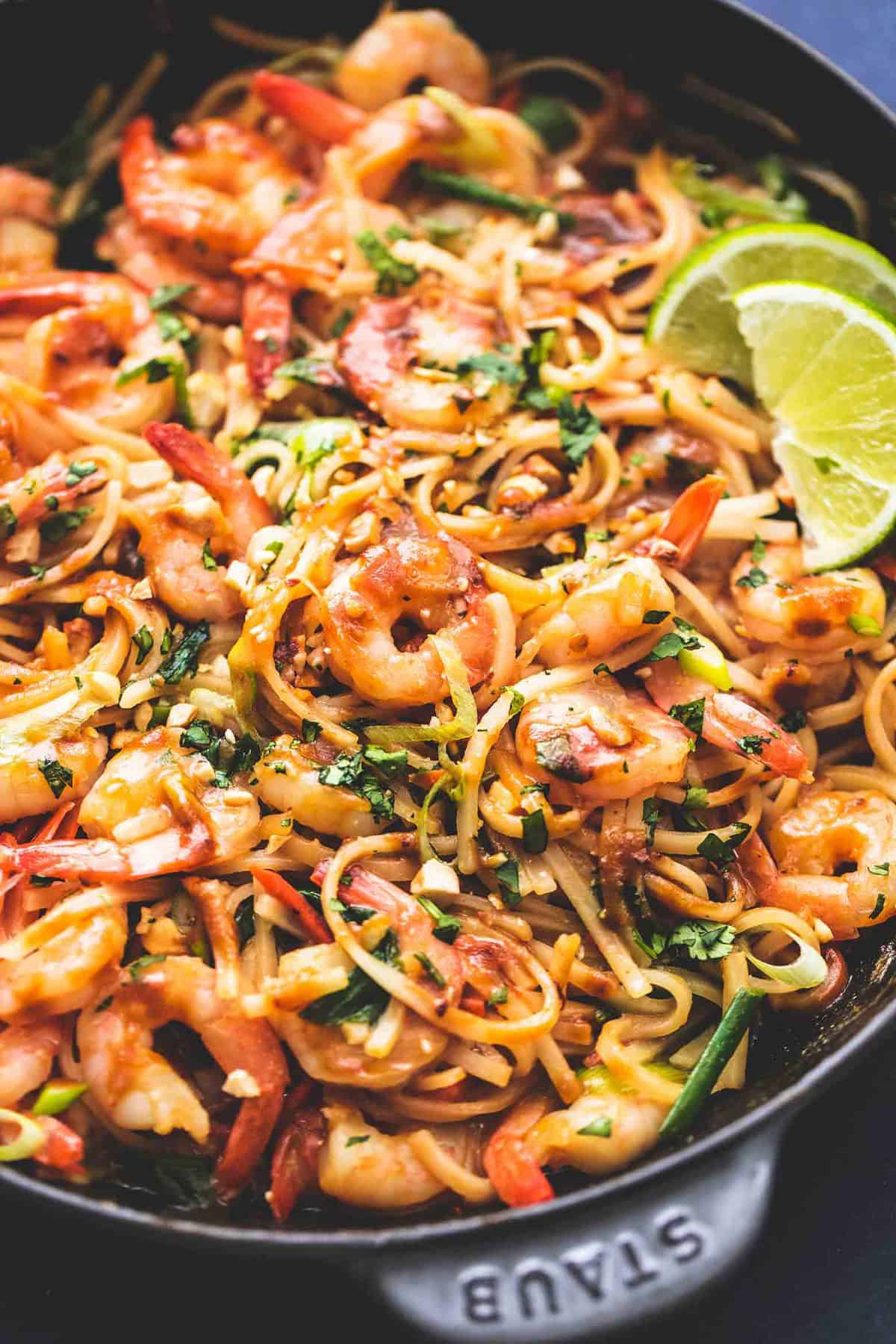 HOW CAN I CUSTOMIZE SHRIMP PAD THAI WITH PEANUT SAUCE?

Don’t let the list of ingredients scare you off — it really is super easy, and totally customizable! If you don’t like something, leave it out. If you have other veggies laying around you want to use up, by all means, use ’em!

I like to substitute thinly sliced chicken for the shrimp a lot and also have used steak and pork. I have yet to try a vegetarian version, though I know it would be delicious as well.

You can also use slivered almonds, cashews, or peanuts too to bring some more crunch to the dish. If you don’t like peanut butter in the sauce, you can substitute almond butter or a non-nut butter substitute.

If you don’t have rice noodles, try using another Asian noodle like soba, ramen, or udon. You can also use a thin pasta like spaghetti, linguine, or angel hair pasta. 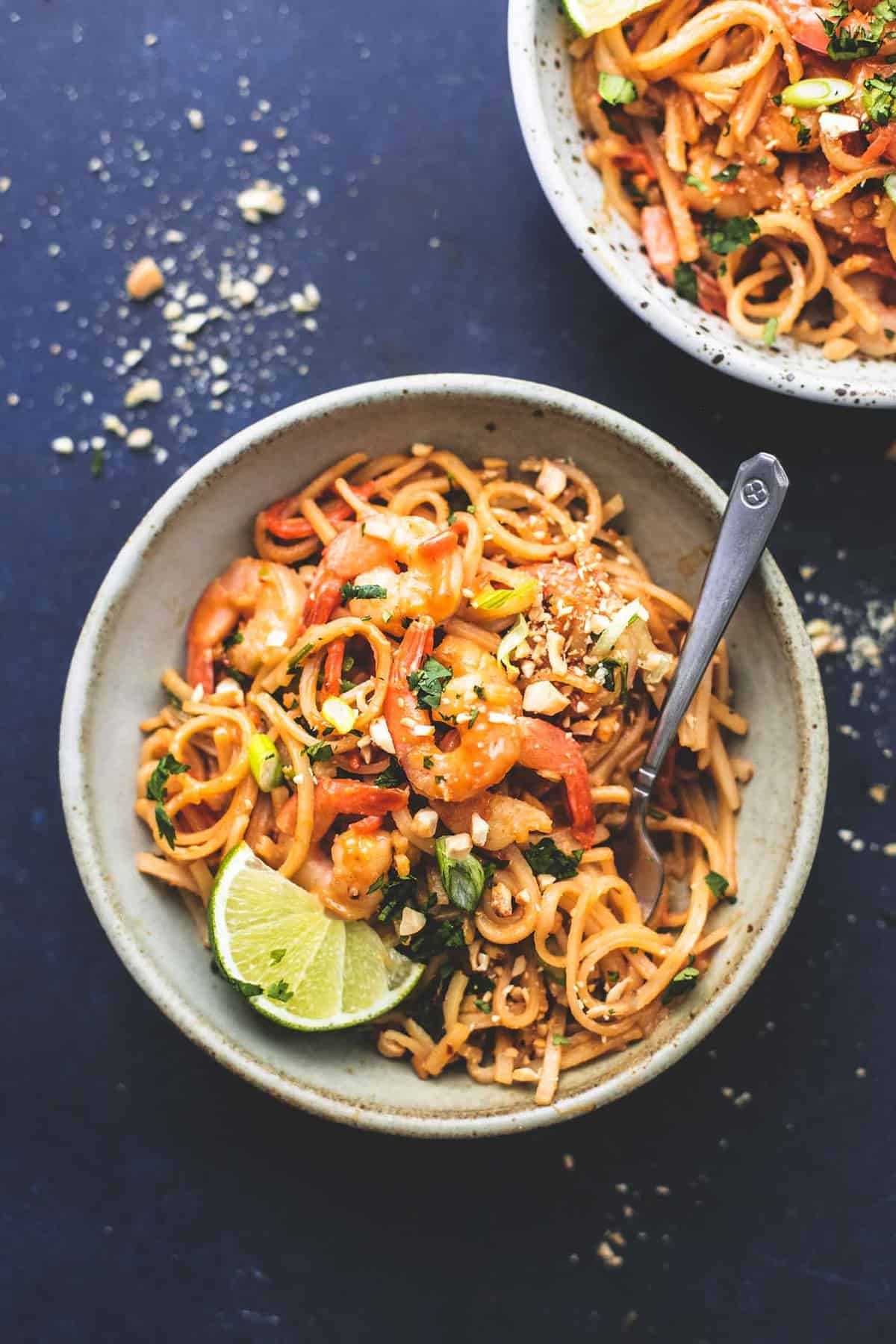 CAN YOU FREEZE LEFTOVER PAD THAI?

Yes, you can freeze leftover shrimp pad thai, but I have to admit, it’s not my most favorite thing to do. The noodles tend to get mushy after you thaw and reheat the dish, as do the shrimp. But this doesn’t seem to bother everyone, so maybe it’s just me. That being said, I think the easiest way to freeze them is in individual portions for a take-and-go lunch to reheat at work or wherever your day takes you. If you want to freeze it in a larger container, then plan on thawing and freezing that whole dish at once.

If you have leftovers in the fridge, you should eat those within three to four days. If you’re not going to eat them in that allotted time, then you should pitch or freeze the remaining Pad Thai.

IS THERE SOY SAUCE IN PAD THAI?

Yes, there is soy sauce in Pad Thai, generally speaking (thought I can’t speak for every Pad Thai recipe everywhere). And, there is soy sauce in this one, too. There’s just a couple of tablespoons so don’t let it freak you out. You can skip it if you like, or cut back on it, or use a lower-sodium soy sauce version if you are watching your salt intake. 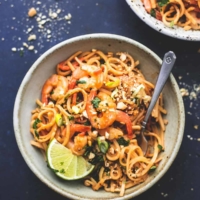 This Shrimp Pad Thai with Peanut sauce is everything you've ever wanted in a spicy Thai dish: rice noodles, shrimp, veggies, peanuts, lime, cilantro, and more and it all comes together quickly right in your own kitchen.
4.58 from 28 votes
Print Pin Rate
Servings: 4 servings

Course: Main Course
Cuisine: Asian
Author: Tiffany
Did You Make This Recipe?Tag @cremedelacrumb1 on Instagram and hashtag it #cremedelacrumb!