Easy Homemade Pie Crust – Learn to make a pie crust that’s as easy as…pie! Even if you’re a pie crust novice, this is the perfect crust to start with and only takes 15 minutes to make!

For years and years I leaned on store-bought crusts to get me through holiday pie-baking season. The thought of making a homemade crust just seemed too intimidating, even though my mom always insisted it’s not that big a deal.

I finally caved this year and let her teach me how to make the easiest homemade pie crust ever! I don’t know why I didn’t listen to her sooner. It really doesn’t take any more time to make from scratch than it does to wait for a frozen pie crust to thaw! Whaddya say? Ready to make a pie crust from scratch today?

Apple cider vinegar — Okay so this ingredient might be a little different than some other recipes you’ve read, but my mom swears this is the trick to a soft, flaky crust.

Freezing — You’ll want that butter you incorporated into the pie crust to melt slowly in the pie crust to create those air pockets that make the crust flaky. Freezing it helps with that process.

Ice cold water — For the same reason you freeze the crust, using ice cold water helps the fat (butter) to not melt while you’re pulsing together the crust.

Why Do you Put Vinegar in a Pie Crust?

I learned that you should always add just a little bit of vinegar to your pie dough. Two teaspoon of apple cider vinegar (because we prefer the taste better) is enough to help soften gluten in the flour so it doesn’t get too tough and chewy. A little goes a long way, I promise two teaspoons is enough for two crusts.

How Do you Keep the Bottom Crust of a Pie from Getting Soggy?

It’s a super bummer when you go through the trouble to make a pie crust from scratch and the bottom gets all soggy. This has to do with the filling you fill the pie with of course. The wetter the filling, the more likely your bottom crust is to be soggy.

One way to fix this problem is to blind bake the bottom pie crust. So what you do is pre-bake the crust (weigh it down with pie weights or dried beans if you are worried about it bubbling in the middle), and this way it will crisp up a bit before adding the filling.

This recipe will make two shortbread pie crusts, which is what you want when you’re making a double-crusted pie (like this apple pie), right? But maybe you’re only making a one-crust pie, like this pumpkin pie. In that case, you can freeze one of the crusts for later. Just keep it in the freezer all wrapped up and roll it out when you’re ready to use. You can also simply halve this recipe if you don’t need another pie crust for later use.

If you do want to use both pie crusts and you want to make the top one all fancy and fun, then roll it and cut shapes out from it with cookie cutters or try it free-hand. Put those shapes on a baking sheet and brush them with egg wash and then sprinkle with sugar. Bake at 350 for 10 minutes, cool, then decorate the baked pie with your shapes.

Delicious Pie to Make with this Crust

Did you make this pie crust recipe?? WONDERFUL – please rate the recipe below! 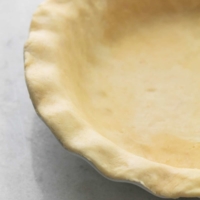 Learn to make a pie crust that's as easy as…pie! Even if you're a pie crust novice, this is the perfect crust to start with and only takes 15 minutes to make!
5 from 7 votes
Print Pin Rate
Prep Time: 15 minutes
Cook Time: 50 minutes
Total Time: 1 hour 5 minutes
Servings: 2 crusts

*As written, this recipe makes two shortbread pie crusts which is great for a double-crusted pie (like this apple pie with one crust on bottom and one on top) OR a single crusted pie with pie crust dough for decorating (like this pumpkin pie). If you only need one crust, you can divide the recipe in half OR better yet, freeze one of the crusts for later – simply thaw and roll out when ready to use! Using second crust for pie decor: Cut shapes from the second crust, place on a baking sheet and brush with egg wash and sprinkle generously with sugar. Bake at 350 for 10 minutes. Cool and decorate baked pie.