Did a holiday even happen if there was no apple pie? I say absolutely not! Round out your holidays with the easiest, simplest, most delicious apple pie you’ve ever come across! The perfect pie to make if you’re a pie newbie, too!

Wanting all things apple this fall? Head on over to my popular posts for Apple Cinnamon Coffee Cake, Apple Cinnamon French Toast, and Apple Slab Pie.

I actually tried to count the number of apple pies I have made since I started baking oh…ages and ages ago. I figured I’d count the ones I helped my mom make growing up, plus let’s say one for each holiday in the fall/winter and another one or two for potlucks and just because and honestly I lost track somewhere after about 50.

The point is, I like to think after all those apple pies, I’ve somewhat perfected this recipe over the years, to the point where it can’t possibly get much easier or tastier! A word of advice though? There’s nothing like topping warm apple pie with a big scoop of vanilla bean ice cream or homemade whipped cream to really light those taste buds on fire!

I could go on and on forever about this pie, but for now, these are my top 4 reasons you should make this pie…and soon!

Apples — Okay, in addition to the obvious reasons you need apples in an apple pie, this is also one of those fruits that never goes out of season. So, no matter the time of year you’re making a homemade apple pie, the ingredients will be easy to find!

Store-bought crusts — If you like to make homemade pie crusts, by all means, go for it. But, I find it to be much, much easier to buy store-bought pie crusts. It saves so much time and they are really good. And, I stopped feeling like this was cheating on pie making a long time ago!

Sugar topping — You could skip the final dusting of coarse sugar on top of the pie crust, but it’s much better if you don’t! The thin layer of heavy cream followed by the sugar just gives that pie crust a little somethin’, somethin’ extra, and it makes the pie pretty as a picture to boot.

Fast — Don’t believe you can make this pie in an hour and a half, bake time included? Believe it! This is as quick as a homemade apple pie gets, while still being chock full of mouthwatering apples, cinnamon, butter, and sugar. 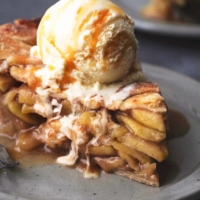 Did a holiday even happen if there was no apple pie? I say absolutely not! Round out your holidays with the easiest, simplest, most delicious apple pie you've ever come across! The perfect pie to make if you're a pie newbie, too!
5 from 19 votes
Print Pin Rate
Prep Time: 30 minutes
Cook Time: 45 minutes
Total Time: 1 hour 15 minutes
Servings: 8 servings

Pie crust: I recommend using a lattice pie crust approach for the top crust OR at minimum cutting multiple 2-inch slits in the top pie crust. This will allow the filling to vent so that steam doesn’t build up and result in a watery filling.