If you love yummy apple desserts and baked goods, then you’ll also want to make my Apple Pie Cinnamon Rolls, my 7UP Apple Cobbler, and my Brown Sugar Walnut Apple Pie.

I don’t know if you are experiencing the urge to actually lick your computer like I am. I’m staring at the photo of this pie and it’s making me think about that time (yesterday) I made this Apple Slab Pie and then photographed it. But what you don’t see is the piece of pie off to the side that I was eating as I was taking photos of this slice because it was the only way I was going to get through the shoot without eating all of the things I needed to take a photo of. Make sense? Good.

So if you can resist licking your screen, then I’ll be able to tell you about how delicious this pie is, not to mention easy to make, and why you should make it today, right now. You will regret nothing.

Okay, thanks for hanging in this long. This version of apple pie takes just 55 minutes and feeds SIXTEEN people. Plus, it’s made with common ingredients you can find probably right in your pantry and if not, they’re nothing fancy you’d have to go to sixteen stores to obtain.

Plus, apples are in season right now, and I’m sure you’re going to have guests coming sooner or later so go get you some and make this pie! 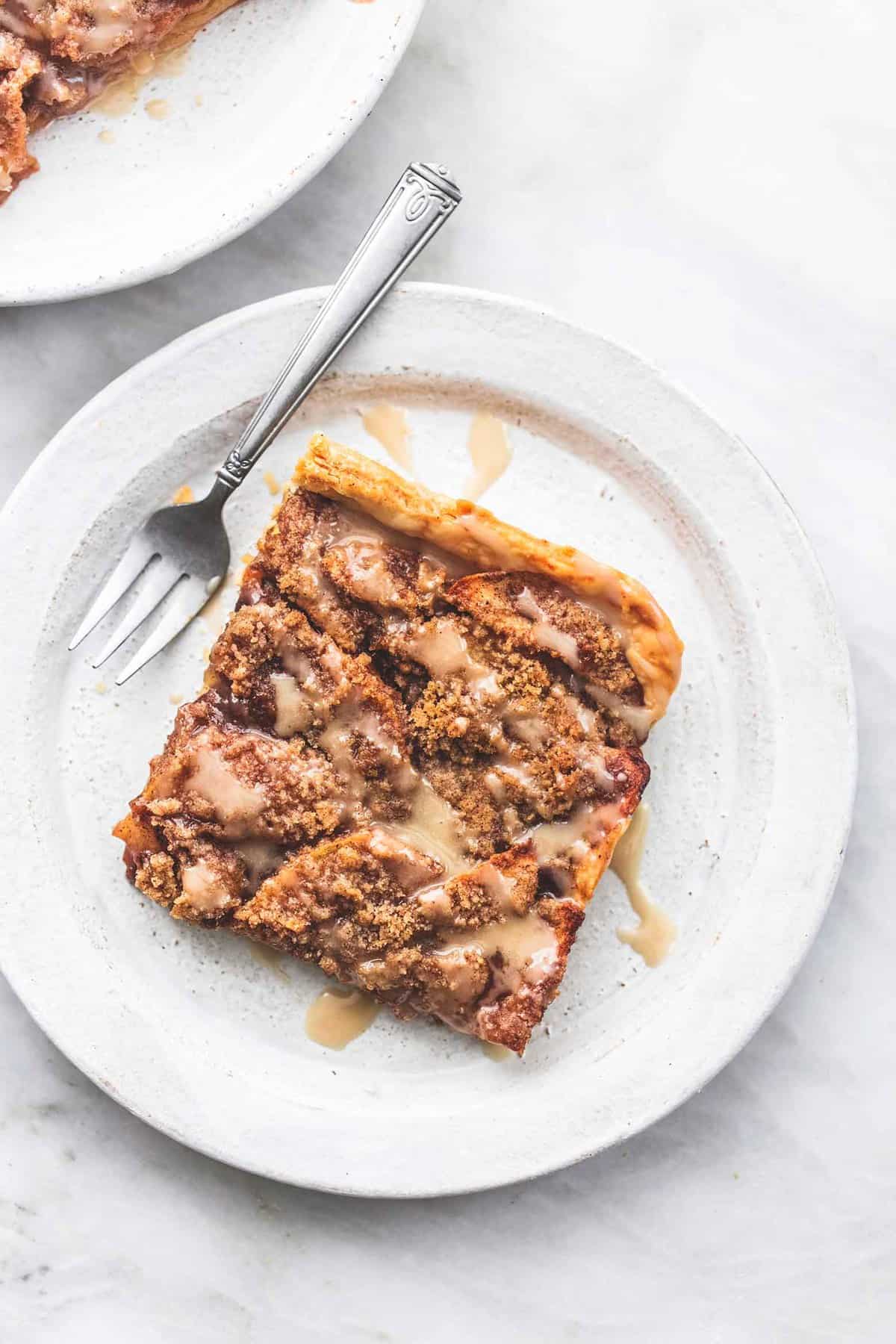 What is the Difference Between a Slab Pie and a Regular Pie?

A slab pie is made on a slab of sorts (usually a large, rectangular baking sheet) and it’s meant to be a quicker, easier version of a regular pie. The crust is usually a pre-made, refrigerated pie crust (or in this case, a puff pastry) instead of a smaller hand-made crust (or you can use store bought too) that you’d put into a round pie pan.

Slab pies are often used in place of the typical pie when you have to feed a lot of people, because you’ll only have to make one instead of three or four, depending on how many people you have in your house.

Slab pies can be sweet or savory, and you’ll see them a lot made with tomatoes and cheese in the summer months. They are all delicious. But this one is for fall and it’s for apples but feel free to experiment however you like with your slab pie. 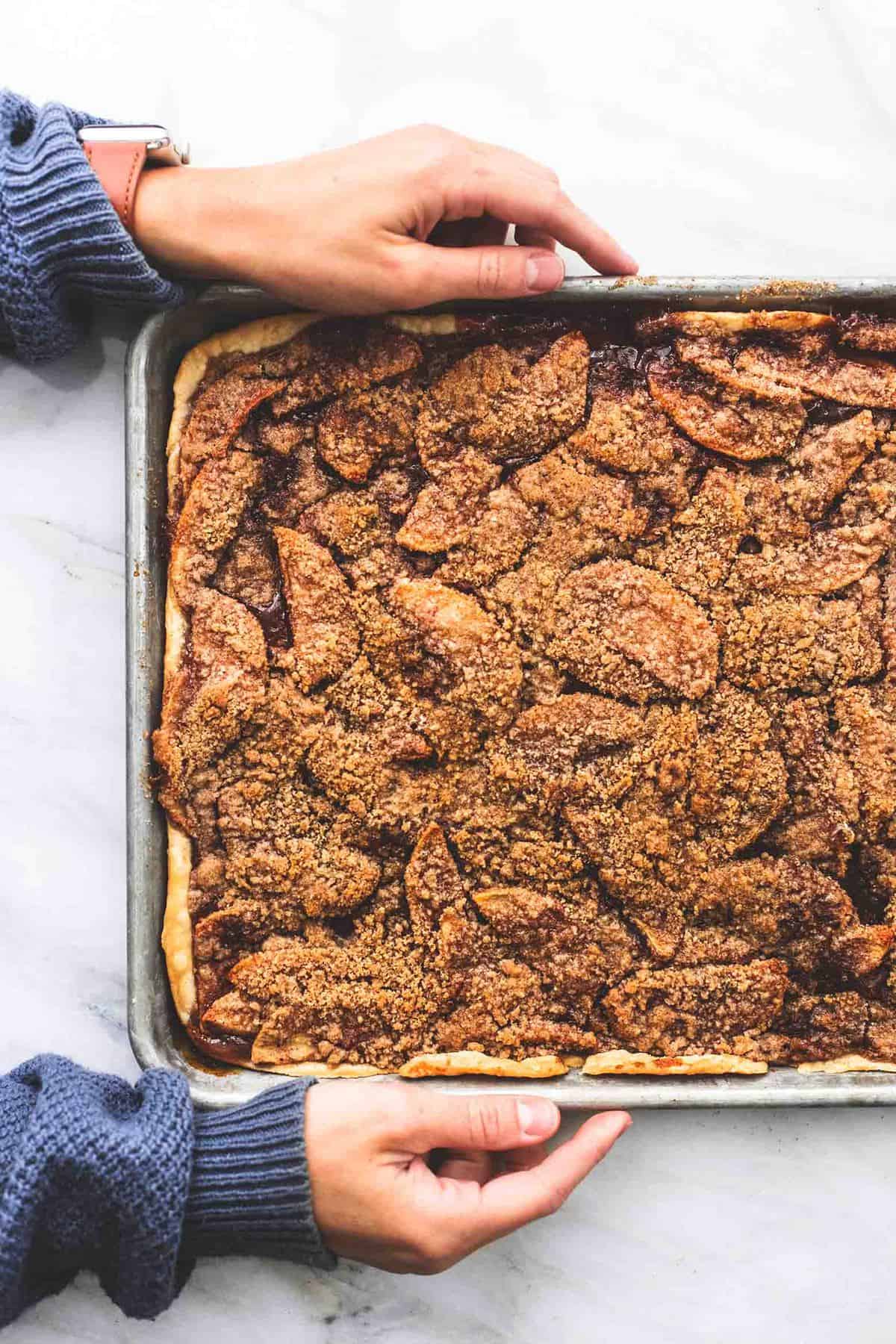 What are the Best Apples to Use in Apple Pie?

In this recipe, I chose to use gala apples because they are a bit sweeter than a lot of apple varieties and I like all the sweetness I can get in my apples this time of year. Other apples that work well in apple pies include: 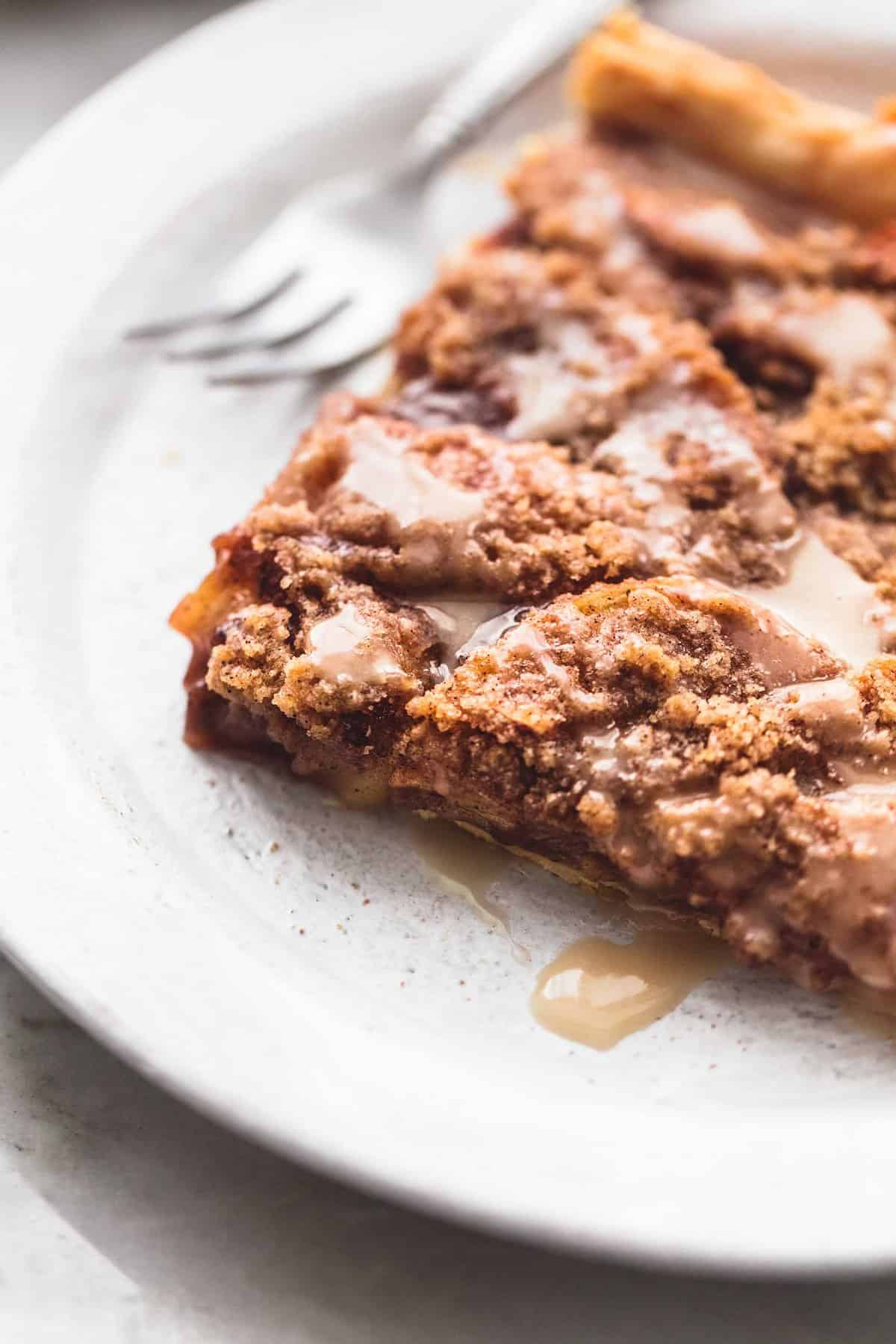 What are Good Substitutes for Maple Syrup?

I realize that not everyone loves the flavor of maple. I don’t understand it, but I realize it. (Kidding.) That’s not a problem, we can work around that.

– Eliminate the maple all together. The pie will be plenty sweet and the glaze will taste just great without the maple.

– Add honey instead of the syrup and omit the extract.

– Use 1 teaspoon of vanilla or almond extract instead of the maple ingredients.

– You could also try 1 teaspoon of molasses for a deeper flavor to your glaze without the maple taste. 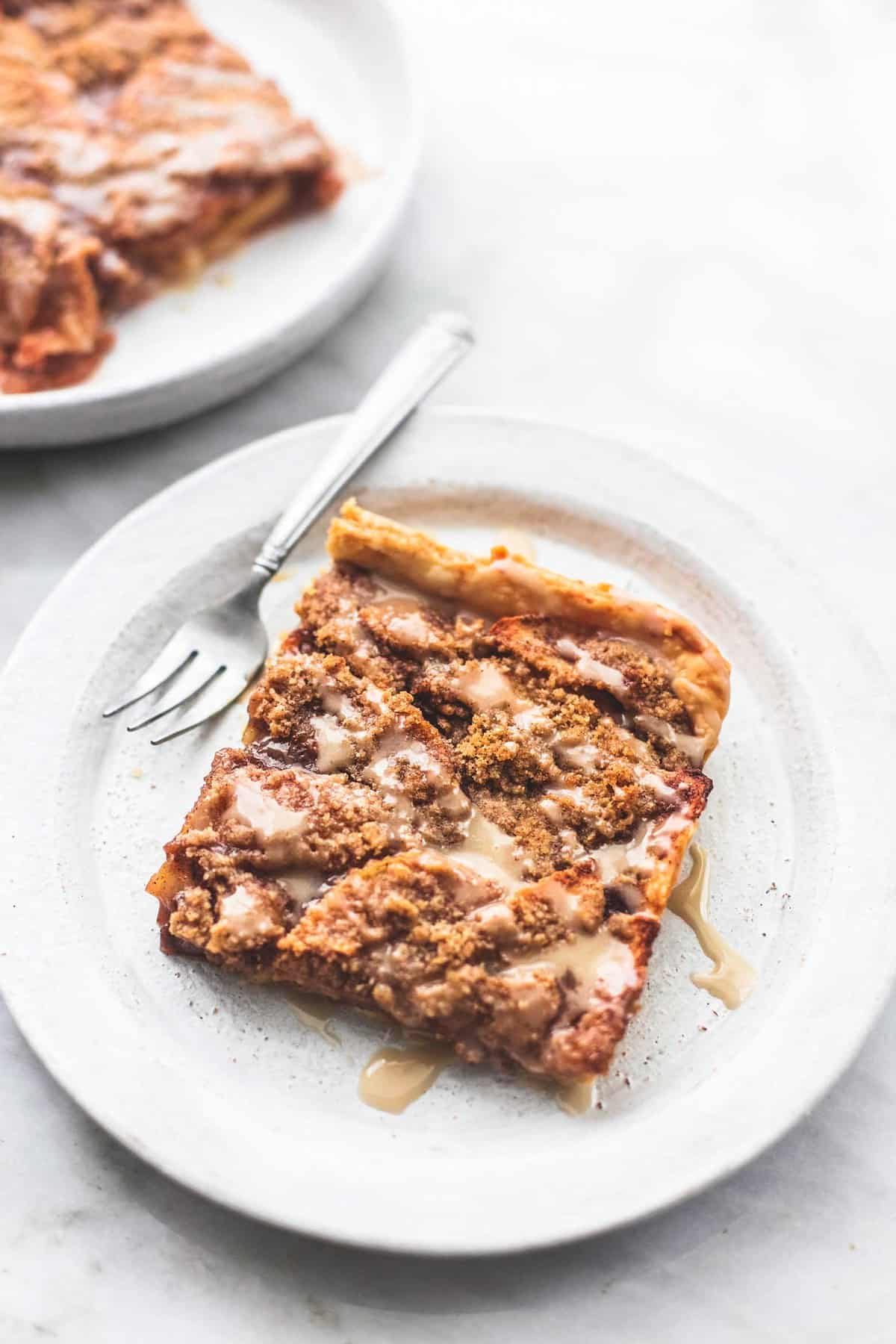 I like to serve my slab pies as-is (they are filled with plenty of yummy ingredients anyway), but you could also:

– Serve it with a dollop of homemade whipped cream or store-bought Cool Whip or Redi Whip.

– This pie is ah-mazing right out of the oven with a scoop of vanilla ice cream right on top. Cold and hot together, a match made in heaven.

– Some people like to serve apple pie with a slice of cheddar cheese on top. I’ve never had this. I’m intrigued. If you do this, let me know how it is!

– Add chopped walnuts or pecans to the top before or after you glaze. 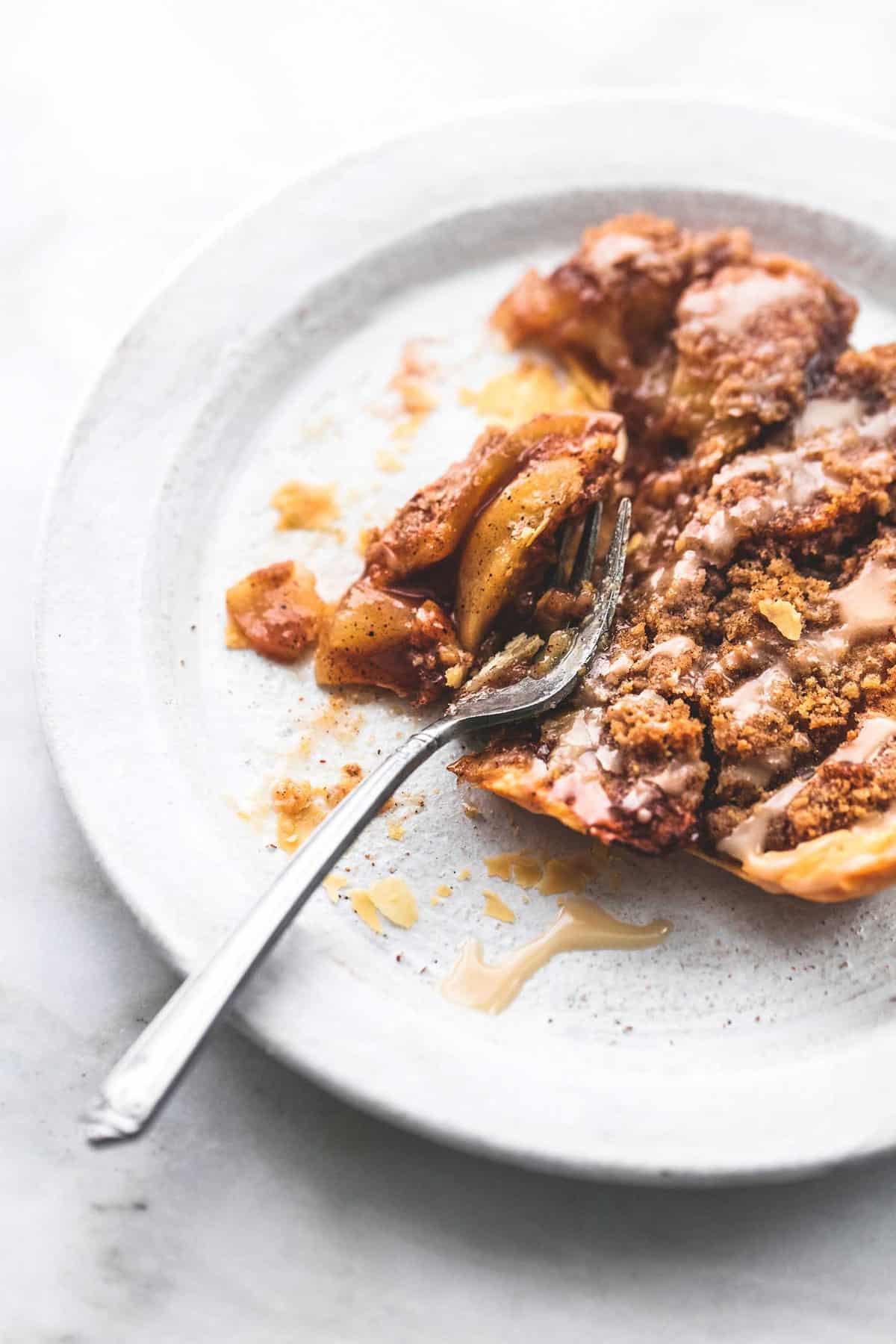 More Pie Recipes to Try Next 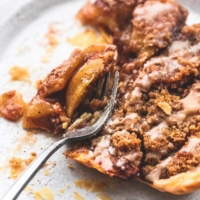 Glaze: For the glaze, you can omit the maple syrup and maple extract and replace with 1 teaspoon vanilla extract.