Tender, baked Pork Chops smothered in a Creamy Mushroom Sauce. These juicy pork chops are covered in a rich and savory garlic mushroom sauce you will crave! 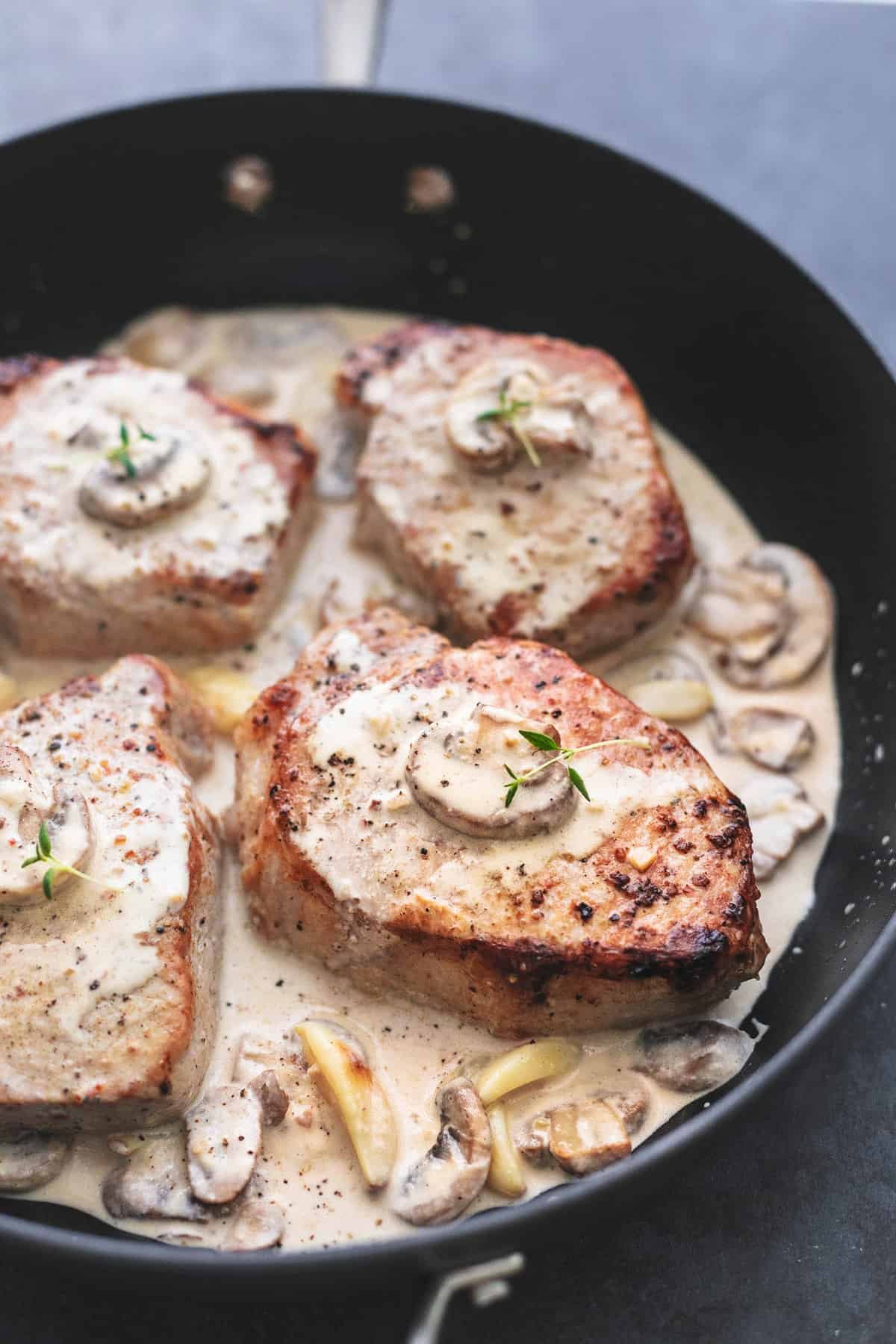 Who remembers the Brady Bunch? I watched it a ton on reruns when I was little. Even if you have never watched it, I’m sure you have heard the joke about Peter and his “pork chops and applesauce” comment. For a little background on the comment if you’re not familiar, Peter uses a Humphrey Bogart voice to say what his family is having for dinner and it’s, you guessed it, “pork chops and applesauce.”

All that is to say, I cannot make a pork chop (or applesauce for that matter) without hearing Peter Brady say it in that voice. Which is neither here nor there and probably doesn’t matter that much in the grand scheme of things, but to me, it just makes me smile.

Now, before you think you’re going to get a pork chop like they served in the 60s, there’s no need to worry about that. Pork chops as a dish have been around a long time, that’s for sure, but they’ve also come a loooong way.

Nowadays, they are thicker, juicier, and tastier than ever before, and that’s all because recipes have changed around so much and cooking techniques have improved. For example, I like to take a nice, thick cut of pork chop (at least 1.5 inches thick) and season all over, sear, then finish baking in the oven for the tastiest pork chops this side of the Rockies. 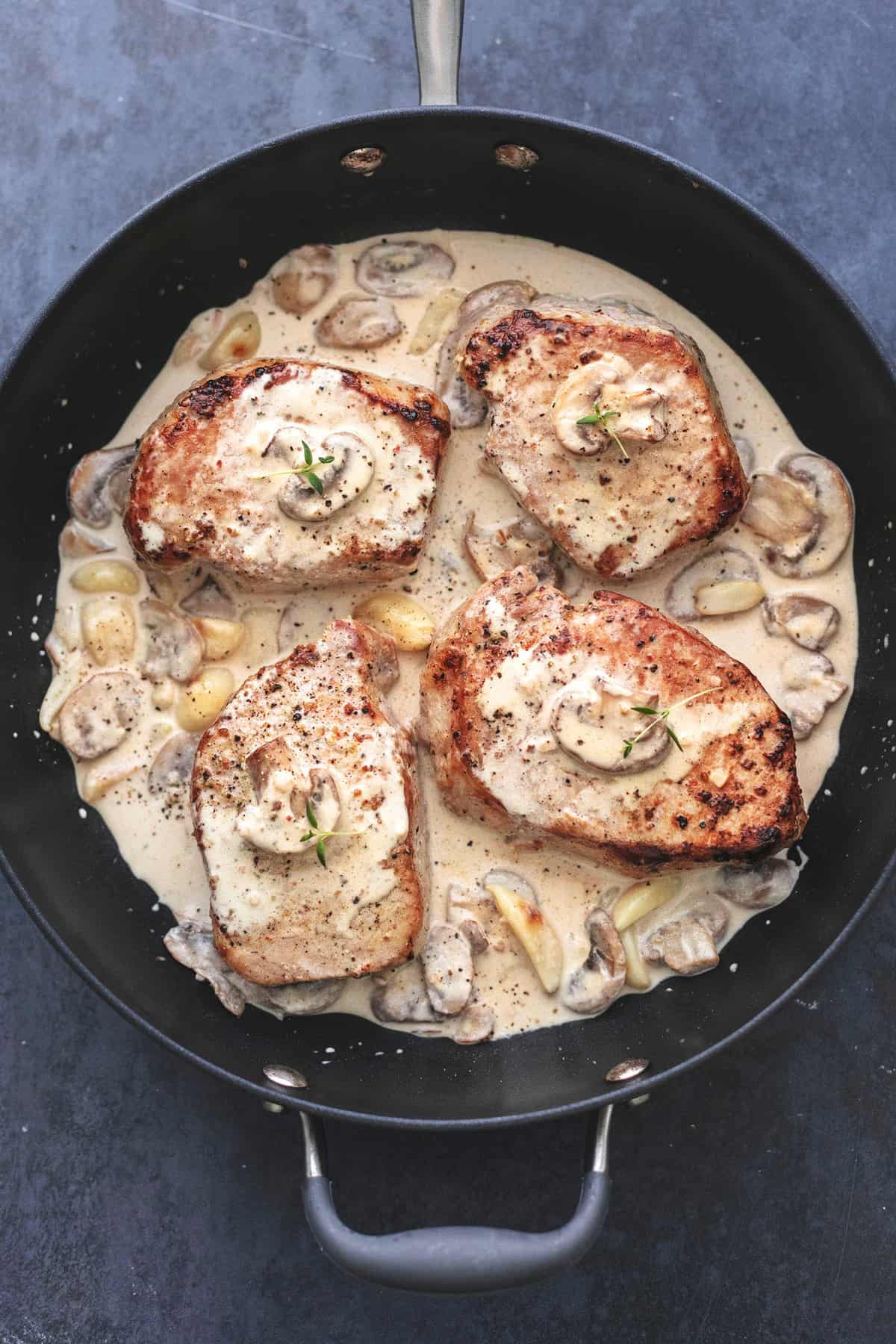 This recipe has a couple more steps than is typical of most of my recipes, but it’s worth every single step. And try not to be put off by it, I think you’ll find that once you get started, it’s going to be pretty simple to move from one step to the next.

3. To the same skillet, add garlic and mushrooms, sautéing until they are browned and softened and fragrant. To that mixture, add in chicken broth, cream, salt, pepper, and parmesan cheese. Add the pork chops back to the pan and spoon some of the liquid in the skillet over the pork chops so that they get moistened on all sides.

4. Finally, put the whole skillet into the pre-heated oven for 20-25 minutes or until the pork chops are cooked all the way through and the sauce has thickened up. To keep the pork chops moist, be sure to spoon the liquid over them about 2-3 times while they are cooking in the oven.

5. To serve, plate each pork chop and spoon the mushroom sauce over the top, garnishing with black pepper, more parm, and fresh herbs and dive right in to these smothered pork chops! 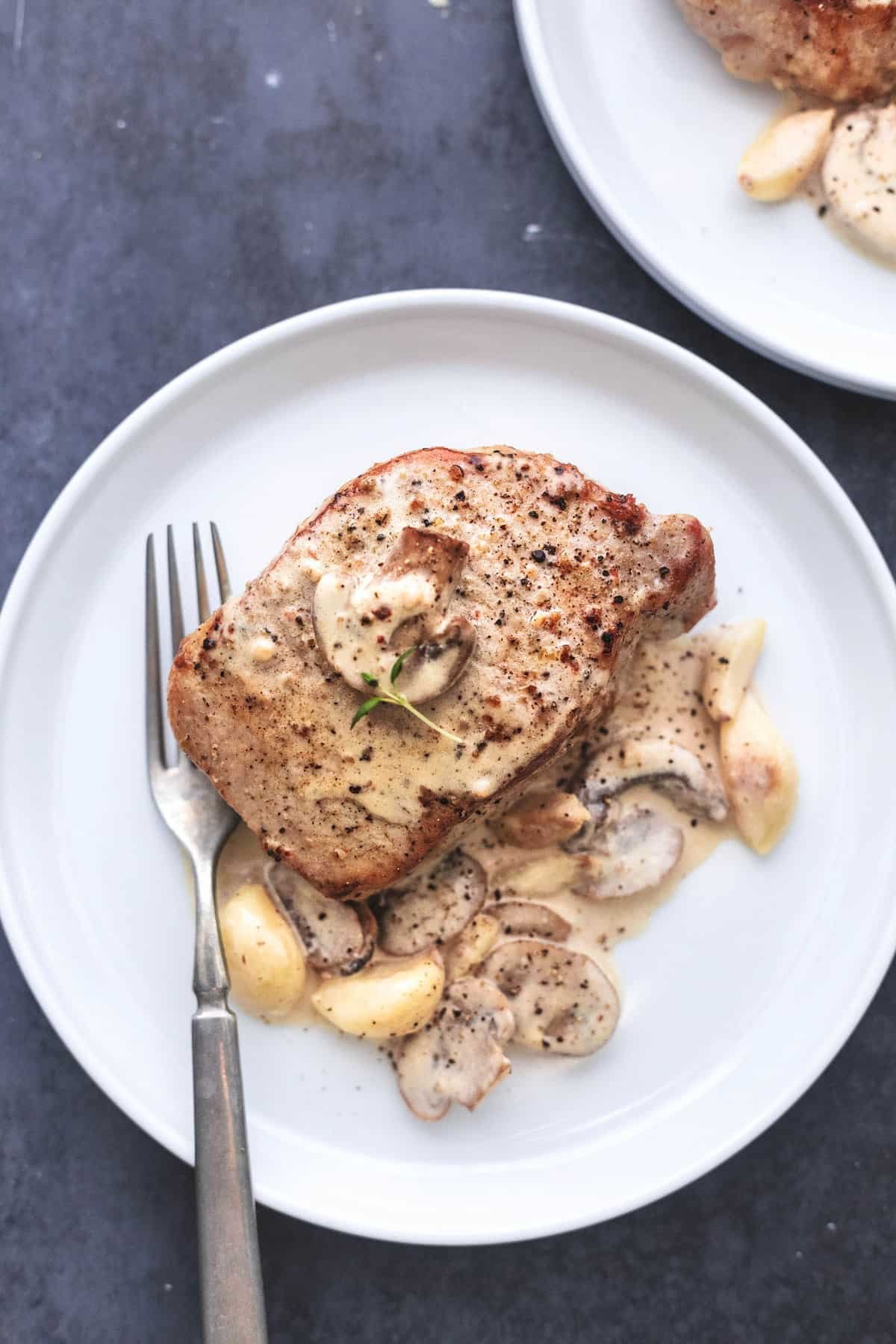 Why are my Pork Chops Tough?

Although this recipe should prevent you from having tough pork chops, it’s sometimes still happens. Mostly the reason will be because pork chops are a relatively lean cut of meat and they are generally also cut thinner than I suggest here.

Pork chops also cook quickly and when you take them out of the oven they will continue to cook (when they’re resting), due to the heat still left in your skillet. Any meat will do this though.

The best way to avoid tough pork chops is to pay attention to how long they’ve been cooking and to not let them go over the cooking time that your recipe suggests. If you’re not sure, use a meat thermometer. If it reads 145 degrees, they are done! You should also keep spooning that yummy garlic mushroom sauce on top of the pork chops to help retain that moisture level as well.

How do you Tenderize Pork Chops?

If you want to make sure to go into the cooking process with already-tender pork, you can tenderize them by hitting them with a tenderizer (mallet) across the surface of the meat. Try to do it evenly if you can. Just a few whacks will do, no need to use the mallet too much. Also, don’t skip the searing step, that helps to lock in all that natural moisture before baking them in the oven.

Did you make this Pork Chops with Creamy Mushroom Sauce recipe? EXCELLENT! Please rate the recipe below! 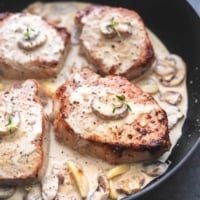 For a lighter version, you can substitute half and half for the heavy cream. The result will be delicious, though not as rich and creamy.  I added whole garlic cloves for added garlic flavor and aesthetic.  If you do not have an oven-safe skillet, you can complete steps 1-6 in a regular pan/skillet, then transfer the sauce and pork chops to a baking dish/casserole dish and bake as directed.