Instant Pot Pork Chops and Gravy will become an instant favorite at your house. Imagine diving into thick-cut, tender, boneless pork chops smothered in a buttery onion gravy with mushrooms and garlic — all done in a flash.

I’m on a kick guys. Just whittling away the hours, waiting for spring has me dreaming up all sorts of new recipes. Since we have begun to work in our yard a little when the weather allows, I have been running short on time to cook dinner. Between raking leftover leaves and picking up all kinds of sticks and other brush that has blown around, not to mention getting the garden beds sorta ready, by the time I come inside, I am sorta scrambling to get a hot meal on the table.

When that happens more than one day in a row, I turn to my trusty Instant Pot. One of my favorite appliances, that trusty kitchen soldier has saved me a time or 2. Or 10. From soups to stroganoffs and from mac and cheese to pot roast, why, I don’t think there’s a recipe I can’t make in the Instant Pot. Okay, well maybe like cupcakes or something. Anyone tried that? Get back to me.

For this pork chop recipe in the Instant Pot, I used the tenderest, thickest-cut pork chops I could find (if your grocer doesn’t have them then ask the butcher to cut them for you). Then, I top those off with a gravy made from butter, onions, mushrooms, garlic, broth, and sour cream that’s out of this world. You’ll never be able to look at plain old pork chops the same way again. 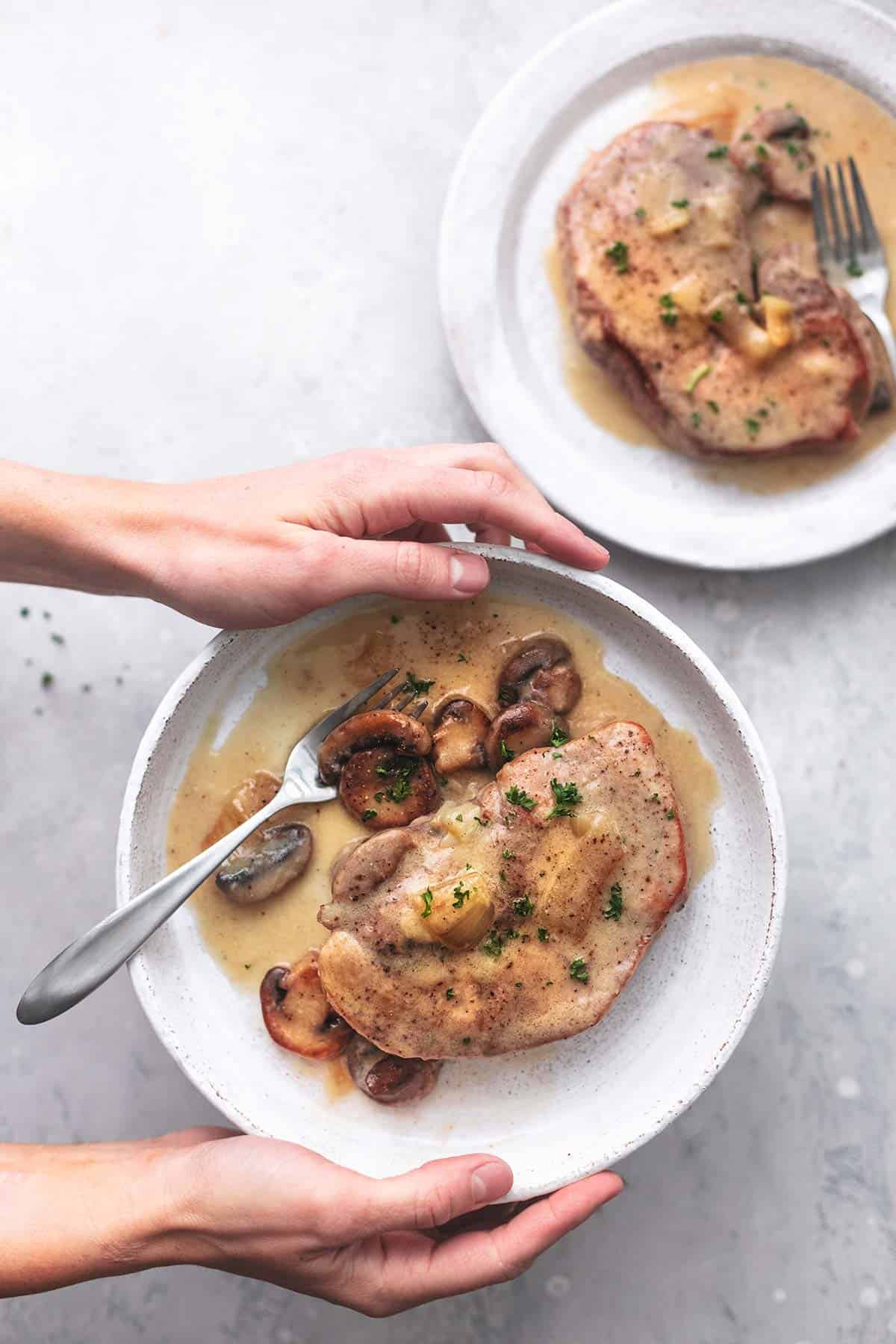 So you want to know how to make this healthy pork chop recipe you say? Well, okay then, let’s do this!

First things first: Season the pork chops generously with salt and pepper. Be sure to do both sides. Then, set the pressure cooker to “saute” and melt 2 tablespoons of butter, then stir in the oil so the butter doesn’t burn. Cook the pork chops on both sides for 4-5 minutes in the Instant Pot liner. Use tongs to turn them throughout to ensure even browning on all sides. Transfer them to a plate and get to work on the gravy.

Add the rest of the butter, then the onions, mushrooms, and garlic to the bottom of the Instant Pot and saute this all together for 2-3 minutes or until the onions are tender and translucent. Next, stir in the chicken broth and add the pork chops back to the pot. See if you can get them to all fit in a single layer on the bottom of the saute pan, but if they overlap a little that’s okay.

Whisk the sour cream into the mushroom gravy mixture in the Instant Pot. Once it’s fully incorporated, add salt and pepper to taste. Change the setting to “soup” and let the gravy boil. Then stir together the water and cornstarch in a small bowl until the corn starch is dissolved. Then whisk that mixture into the gravy and let it thicken. Taste and add more salt and pepper if you like.

Spoon the gravy mixture over the pork chops and serve. 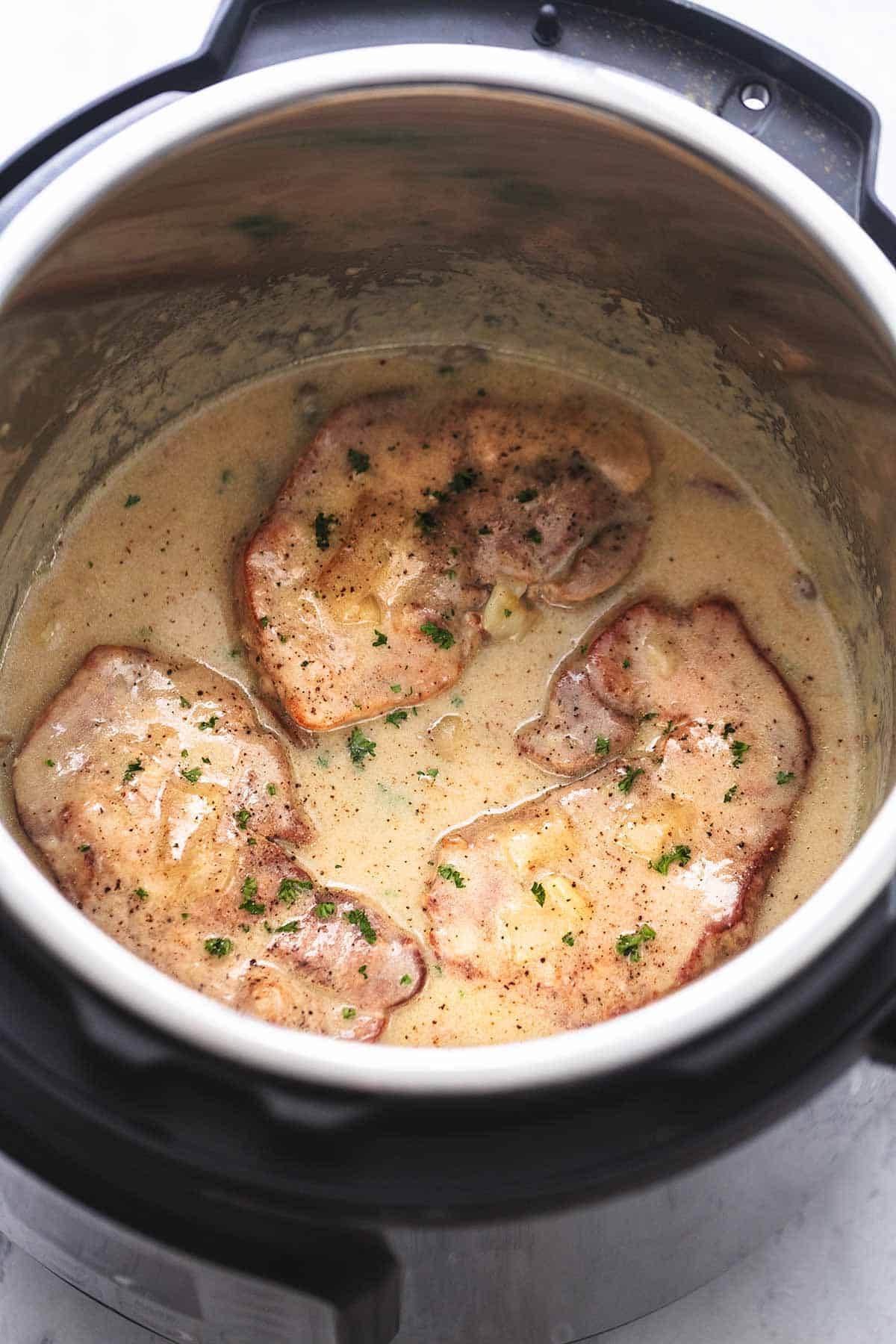 Do I Have to Use Thick-Cut Pork Chops in an Instant Pot?

While I like to use pork chops that are cut on the thicker side, you absolutely don’t have to. If you have thinner pork chops at home already or just prefer a thinner-cut pork chop, then those will work in the Instant Pot as well. For a thin pork chops recipe, simply reduce the cooking time in half (so for 6 minutes on manual instead of 12) and follow the rest of the directions just the same. 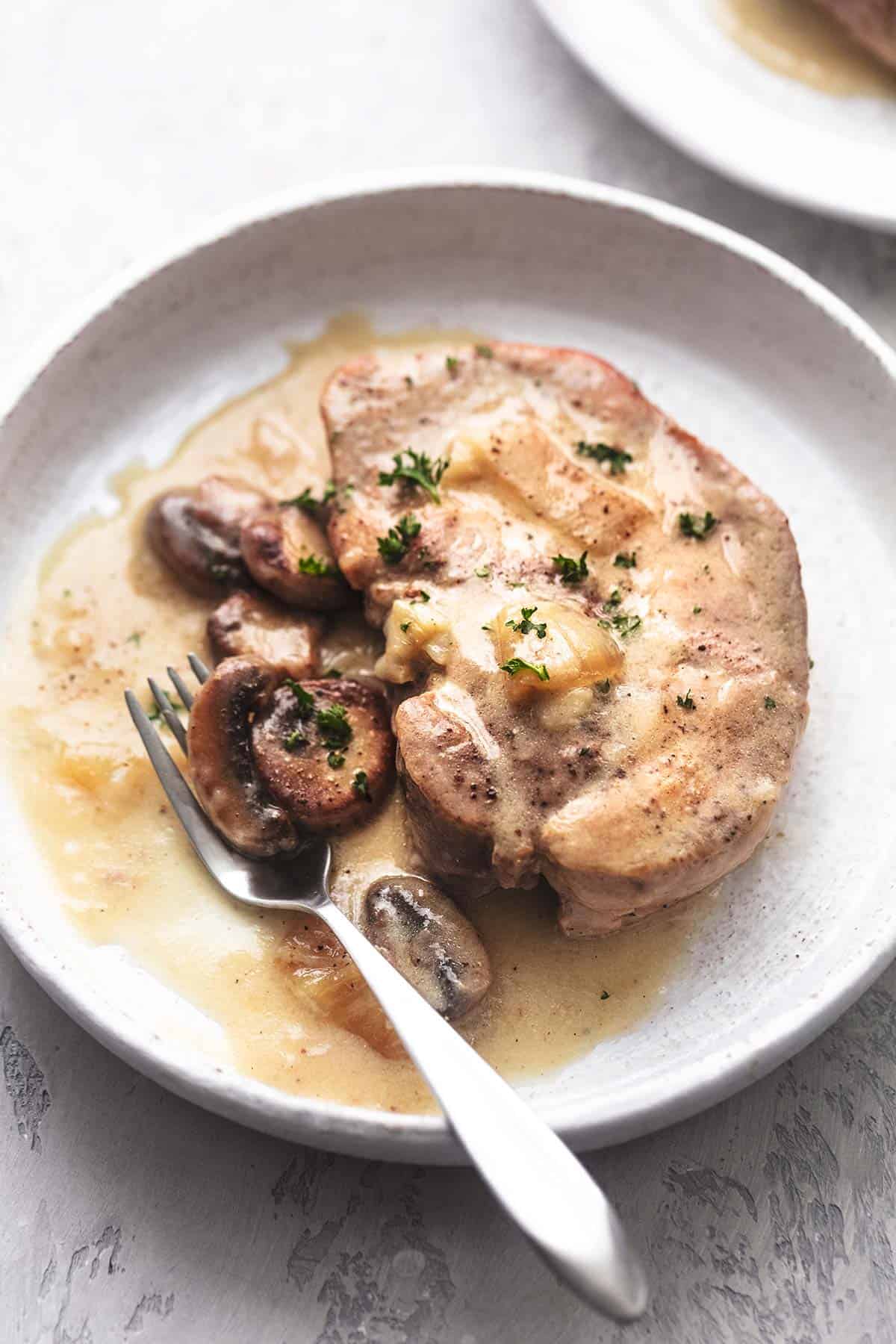 What is the White Stuff that Comes Out of Pork Chops?

Okay so sometimes when you cook or bake pork chops, you’ll see white blobs float to the surface around the cuts of meat or next to the meat. Don’t be alarmed, that’s just the juices of the pork chop cooking off.  And, while it’s not very appetizing you can just skim it off and throw it away. It won’t hurt you and it’s totally normal.

for the pork chops

For thin pork chops, reduce cook time by half.