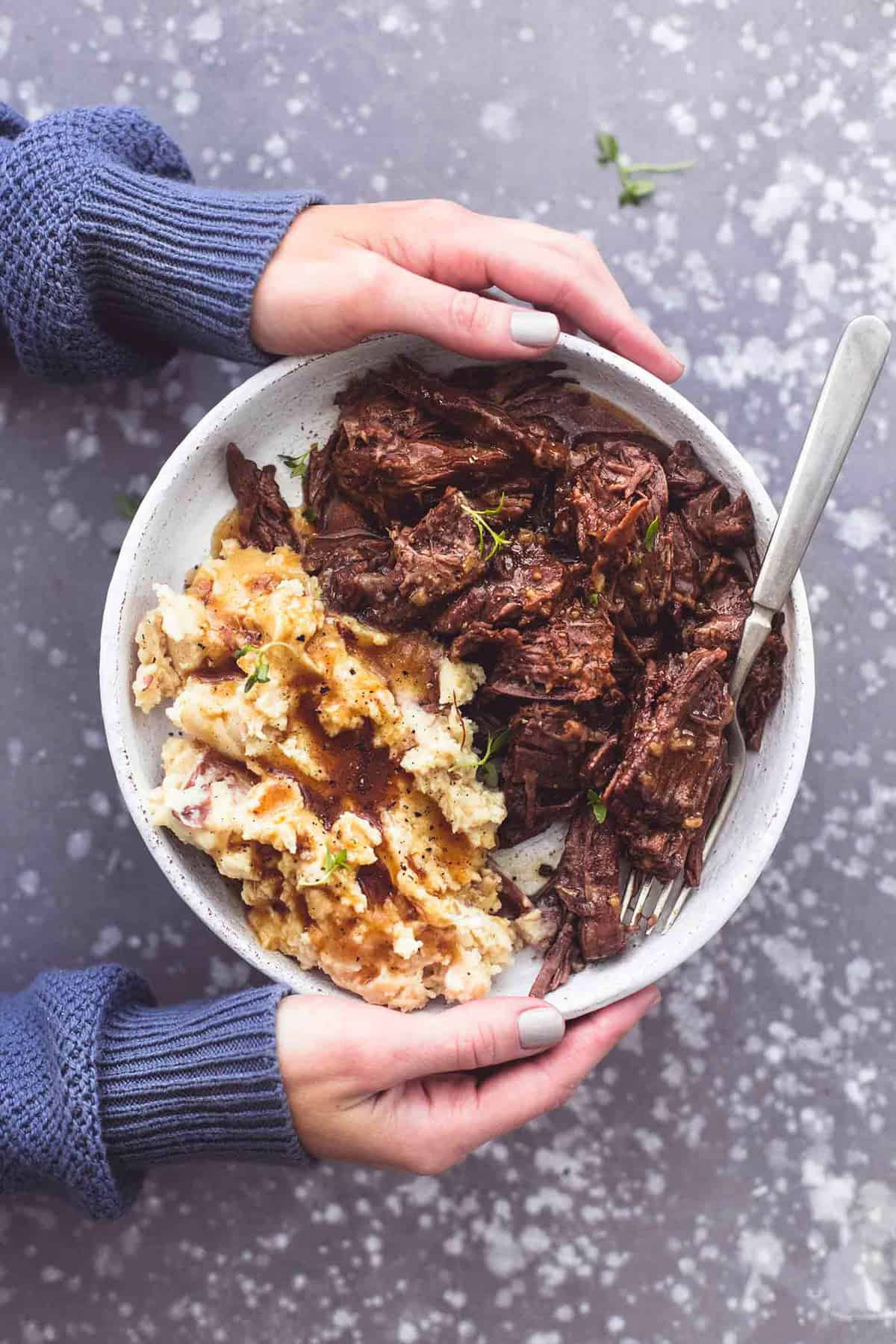 As much as I love an Instant Pot for the easy things, I also love it for the complicated things (which are still easy in an Instant Pot). What I mean is, sure easy things are still great to make, but what makes this appliance really stand out is its ability to take a typically complicated recipe and really simplify it and make it fast while keeping its integrity. I hope I didn’t lose you with my own confusing logic there.

I’m not sure if Julia Child would agree with me, and she’d probably rather go the long route, but then again, she’s amazing. But in today’s fast-paced world that pulls us in a million directions every day, some things just need to be simplified. Like pot roast. 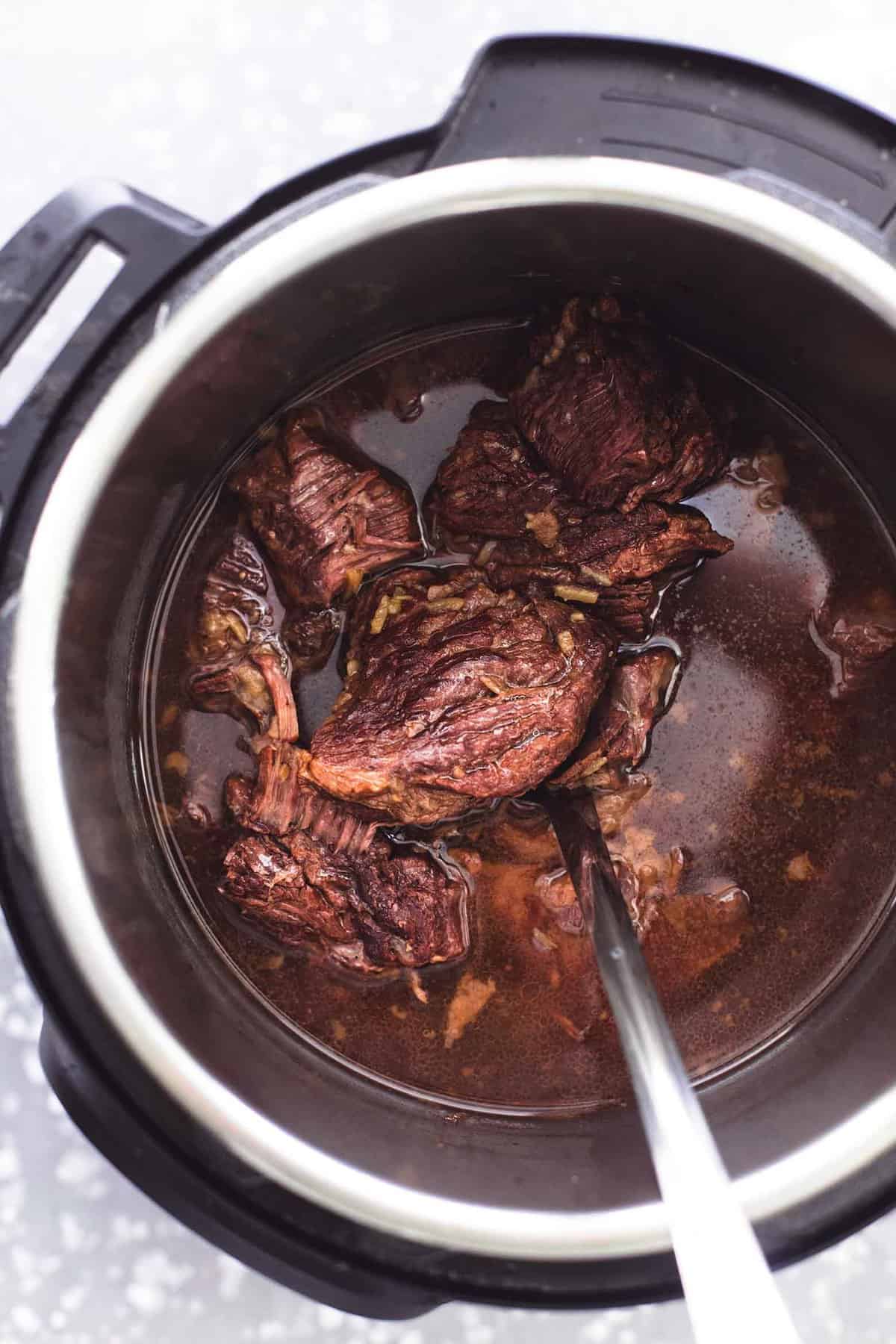 Even though we are coming off the holidays, I still have a hankering for bigger, heartier meals on occasion. I might not be roasting a whole turkey or preparing a glazed ham, but my leftovers are long gone and some nights I need some warm, filling comfort food.

The inspiration for this Instant Pot Pot Roast came from all of the above needs, plus my family (kids included) really enjoys a nice, tender bit of beef now and then. This recipe doesn’t contain many ingredients (and most you probably have on hand). It’s also easy for kids to eat plain or even mix in with their mashed potatoes (if they are the kind of kids who will let their food touch). Plus it’s a great leftover to have on hand for so many other dishes (so you might to make this twice). 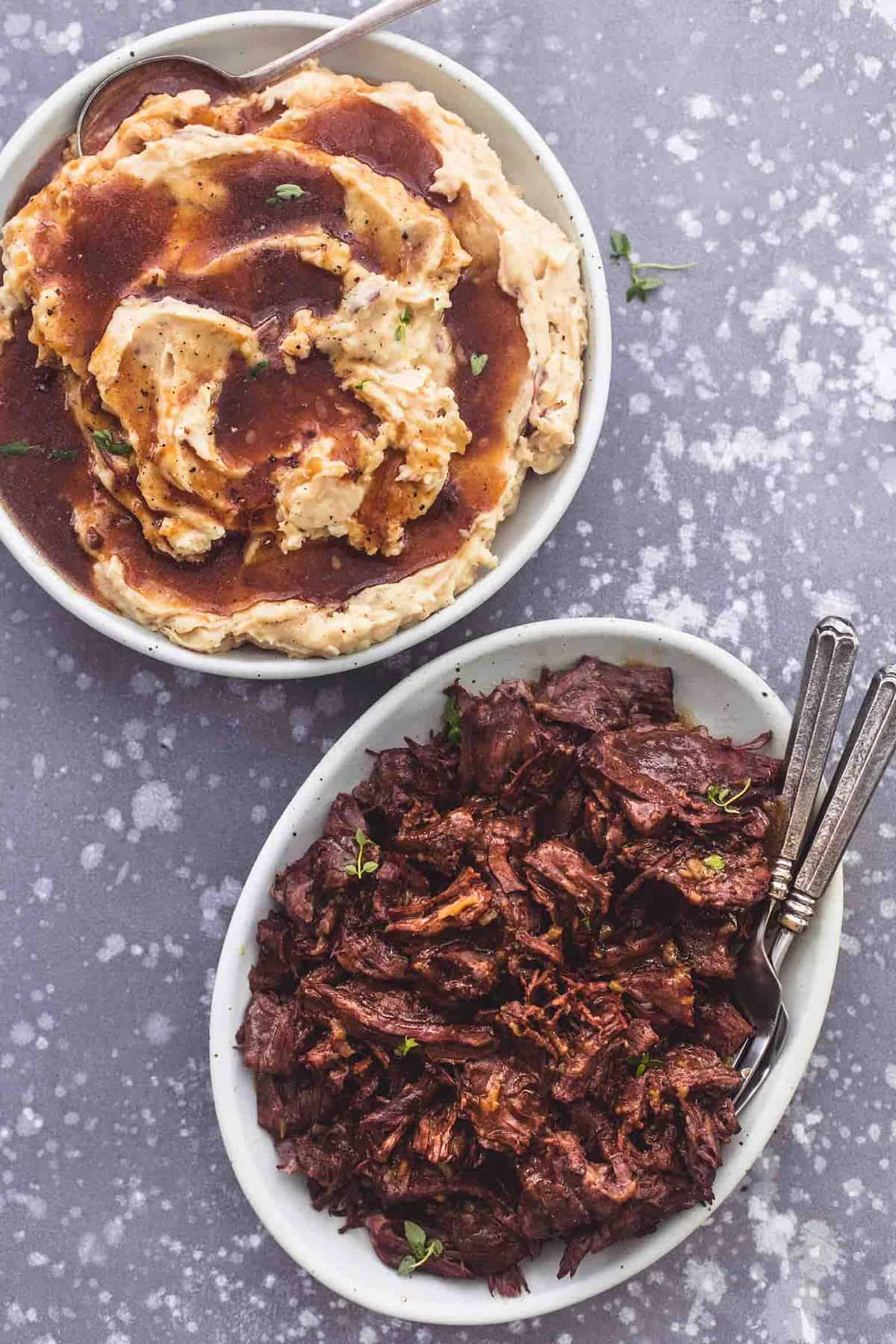 WHAT SIDE DISHES GO WELL WITH POT ROAST?

Well mashed potatoes (obviously). I’m a huge fan of the two together! However, the potatoes are the second part of this recipe and are easy enough to skip. Other side opportunities include: 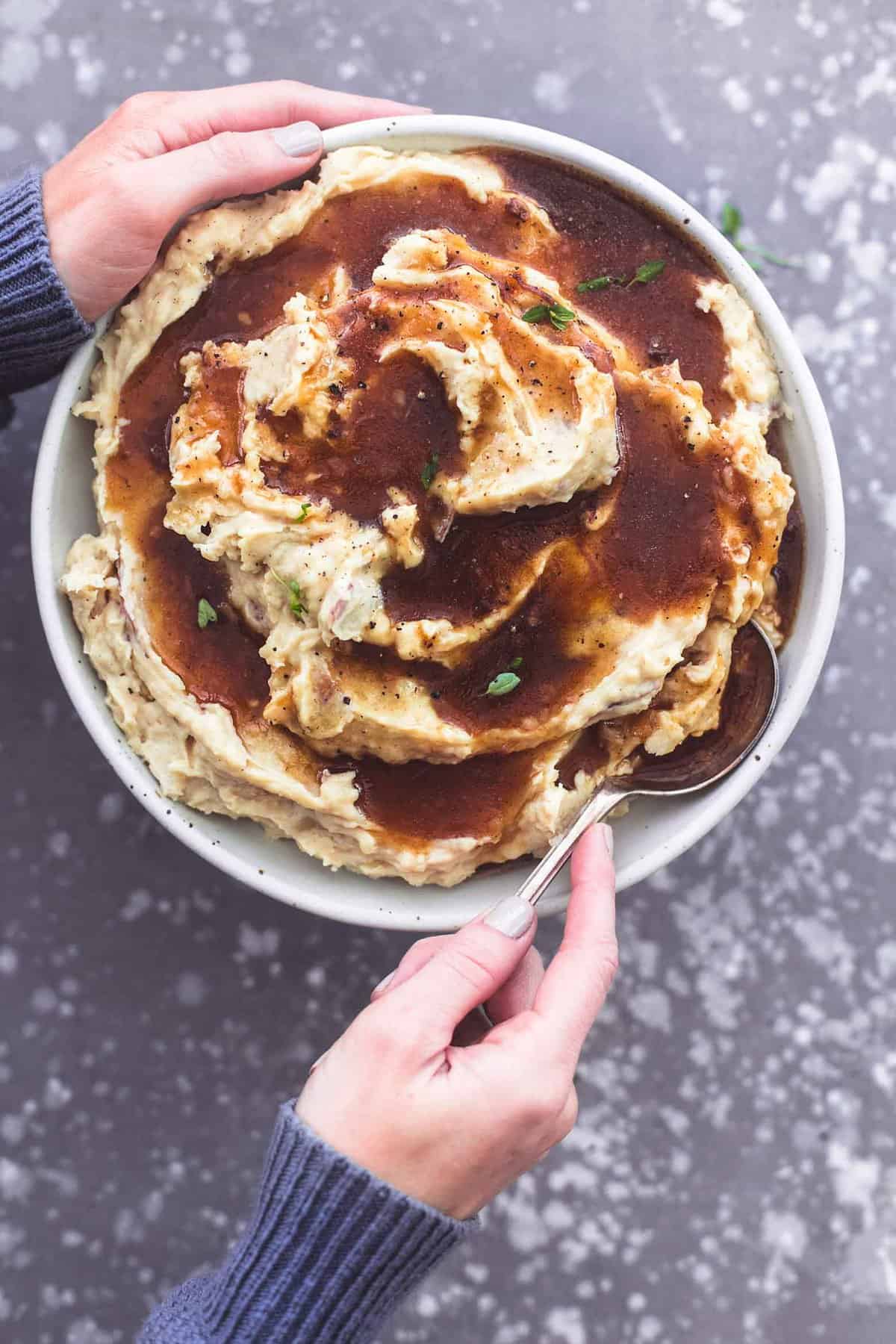 WHAT CAN I DO WITH LEFTOVER POT ROAST?

As I hinted to above, you’ll love the leftovers almost as much as you’ll love eating the dish the first time. My favorite ways to eat leftover pot roast, in no particular order:

HOW CAN I CUSTOMIZE THIS POT ROAST RECIPE?

I like to make recipes my own, and I’m sure you do, too. I used two packets of dry onion soup mix (or you can make your own in this recipe). But some other variations include:

WHAT CUT OF MEAT DO YOU USE IN A POT ROAST?

I have used both chuck and rump roasts in this recipe. You can also try a round roast or a brisket, though both are tougher cuts of meat that might take a little longer in the pressure cooker, so take that into account if you choose different cuts of meat. 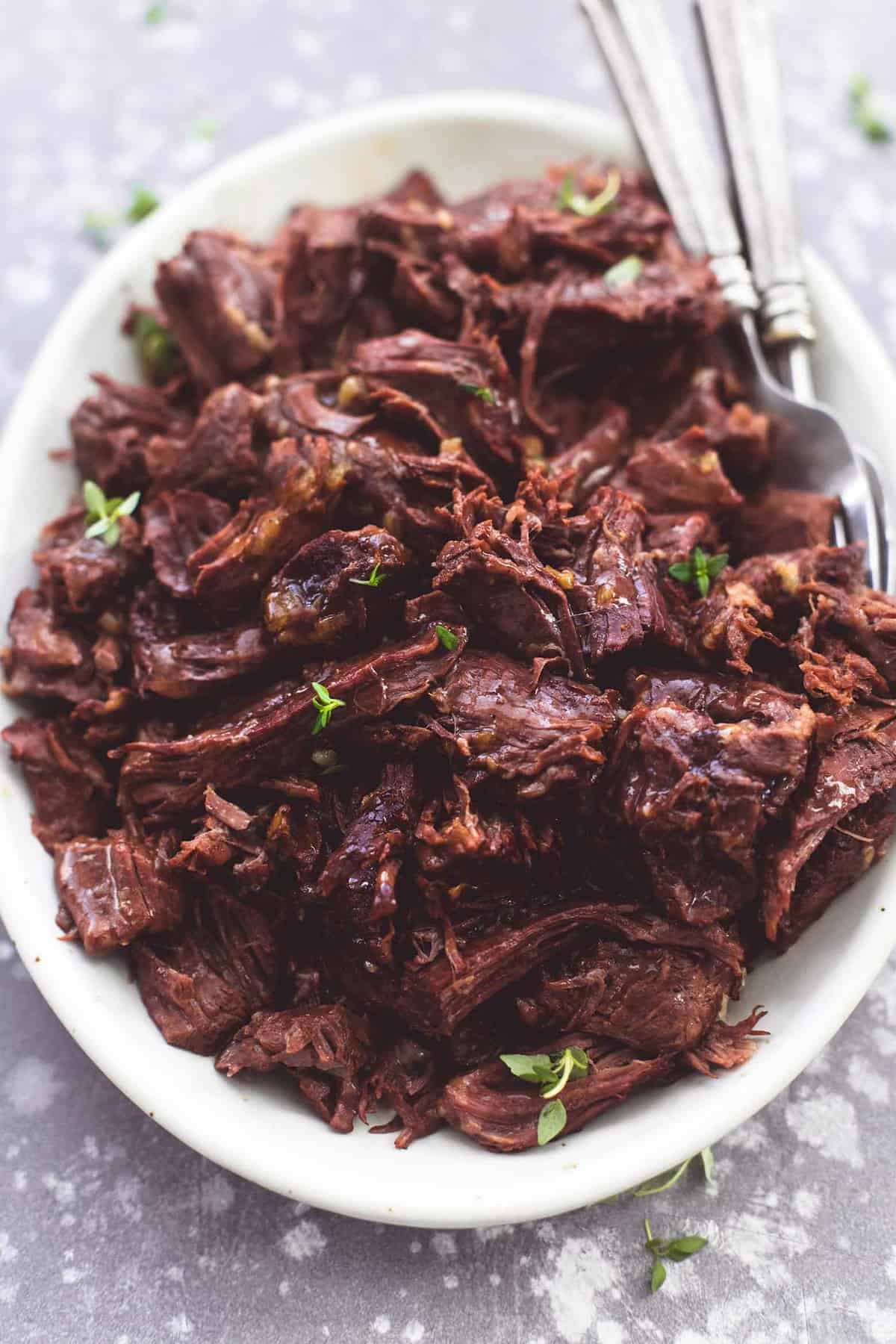 “I followed the roast recipe to the letter, making the suggested homemade soup mix. I have tried so many instant pot roasts, and this is now my go-to! Perfectly cooked and wonderful gravy. Thank you!” – Kellie

“This was so easy and so good. Since the mallard effect happens under pressure, I didn’t even sear the meat. I also used beef bone broth since that’s what I had, it added an extra depth of meaty flavor. I thought the mashed potatoes would be weird since they cooked in the meat juices, but they were delicious.” – Peg

“We made this today and it is definitely going into the recipe rotation! [I] seared the meat in a skillet instead of the instant pot, and we toasted the garlic in the toaster over before adding it to the potatoes.” – Cat 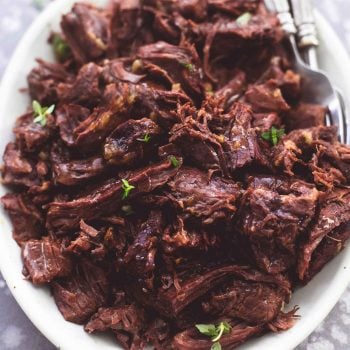