Slow Cooker OR Instant Pot Creamy Chicken Noodle Soup with the perfect blend of flavors makes a healthy, hearty meal made in the pressure cooker or crockpot!

Although the Instant Pot changed my life, I know that not everyone has jumped on board with it yet, or that some people might even — gasp — not like using one. That’s totally fine, I promise. That’s why I like to create these kind of dishes with both options in mind, because I want you to be able to make this recipe, even if you don’t have the exact, right tool.

Either way you choose to cook it though, it can’t go wrong. Seriously, this recipe is so easy. And, with the weather cooling down nothing beats a nice, warm bowl of soup. I know what you might be thinking: Another chicken noodle soup recipe? Come on. How many different ways can there be to prepare chicken noodle soup?

And I’m here to tell you: many ways. But, I think you’ll agree that the bit of “creaminess” added to the broth with the heavy cream and then the flour-and-broth mixture really takes a boring, been-there-done-that-a-million-times soup and turns it into something guest-worthy! That is, IF you feel like sharing!

Plus, the addition of peas, carrots, and celery adds a little boost of nutrition to your typical chicken noodle soup.

What Does an Instant Pot Do?

If you’re not familiar with the Instant Pot, let me tell you why I like it so much. Not only does it cook meals “instantly” (okay not really, but it cooks them pretty darn fast), but it also acts as a rice or slow cooker, a yogurt maker, a steamer, a saute pan, and more, all depending on which model you buy. So, if you are short on time or space (or both) then this gadget can help solve both problems at once.

Granted, there is a bit of a learning curve to working the Instant Pot, but once you figure it out, you’ll love the slow-cooker “set-it-and-forget-it” aspect of the appliance, but with the “slow” part taken out. So if you don’t even have time to wait four to six hours for the slow cooker (or you forgot to put all the ingredients in before you left for work), don’t worry! You can add all the same ingredients to the Instant Pot and get your meal done in a fraction of the time. 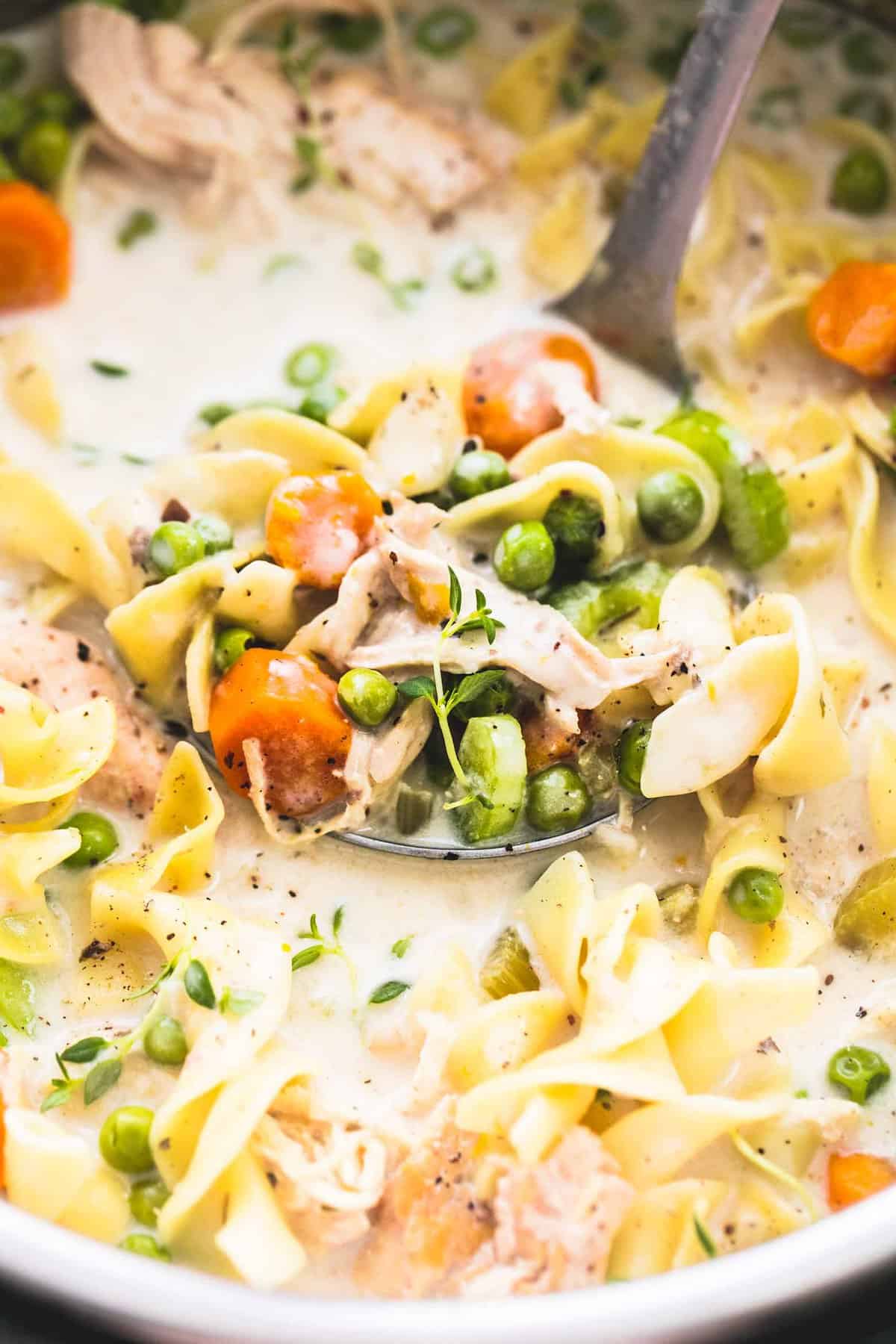 How Do You Make a Cream Sauce?

For this recipe, I didn’t make a “true” cream sauce. Those involve making a roux with butter and flour together for awhile until other liquids can be added – in this case chicken broth.

But, because this recipe is time-saving, I made a quick cream sauce by just whisking together flour with chicken broth and then adding the heavy cream. You still get the benefits of a cream sauce, but without all the work and heaviness of one you might typically find.

You can get a better idea of how I make a true cream sauce in the directions for this Easy Creamy Macaroni and Cheese. 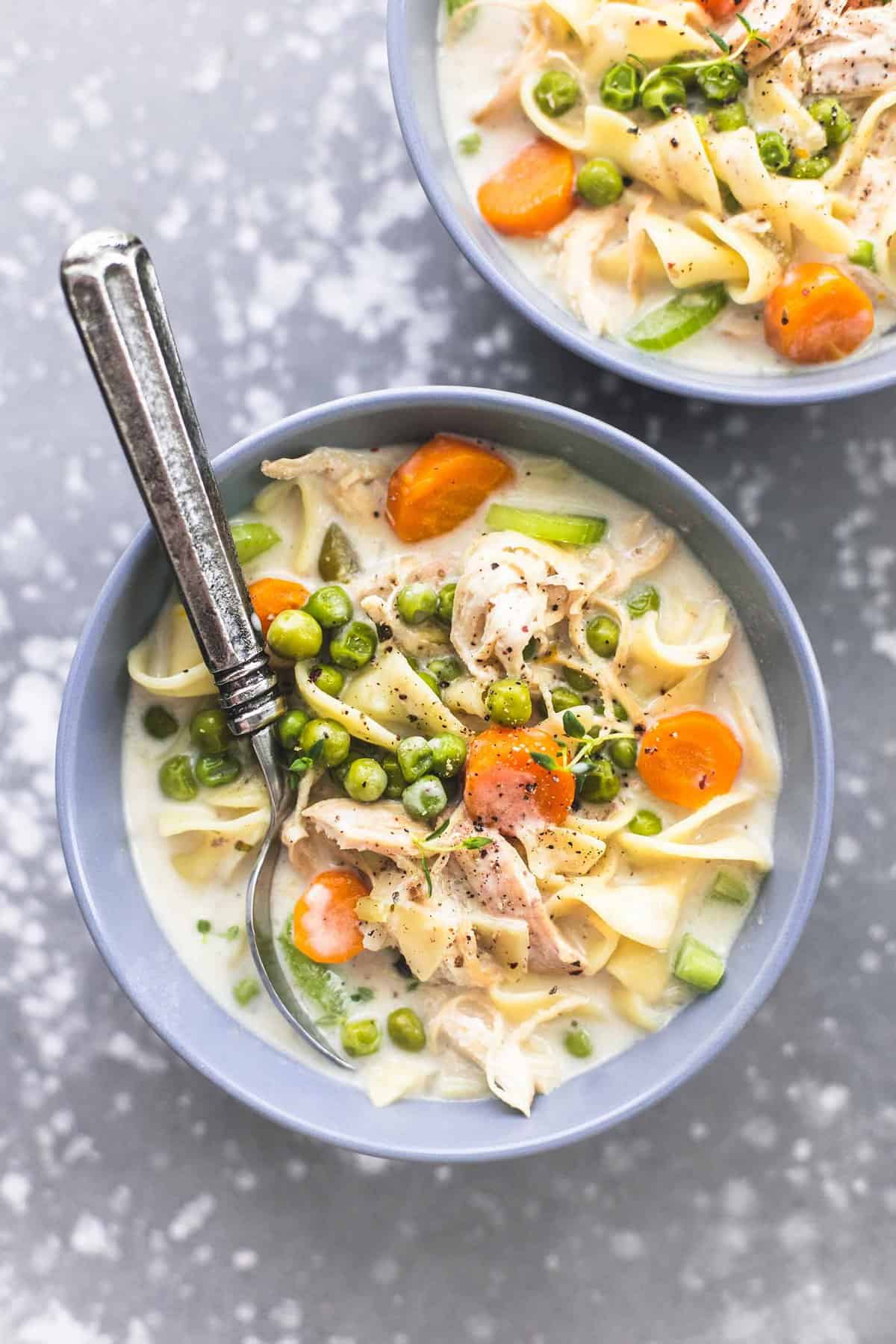 Can I Put Frozen Chicken in the Slow Cooker or Instant Pot?

Yes! You absolutely can. I don’t always remember to thaw out the chicken, either. You just have to allow for more time for the chicken to cook if you put it in frozen. Not a lot of time – only 10 extra minutes in the Instant Pot or one extra hour in the slow cooker. Not bad, and almost reason enough to “forget” to thaw the chicken all the time!

Oh, side note: One trick I like when working with frozen chicken is that it’s much easier to cut evenly. So, let’s say you have frozen chicken, but you want to have the chicken pre-cut into cutlets or smaller pieces before it’s thawed or cooked. Try it for yourself, cutting chicken while it’s frozen is SO MUCH easier. 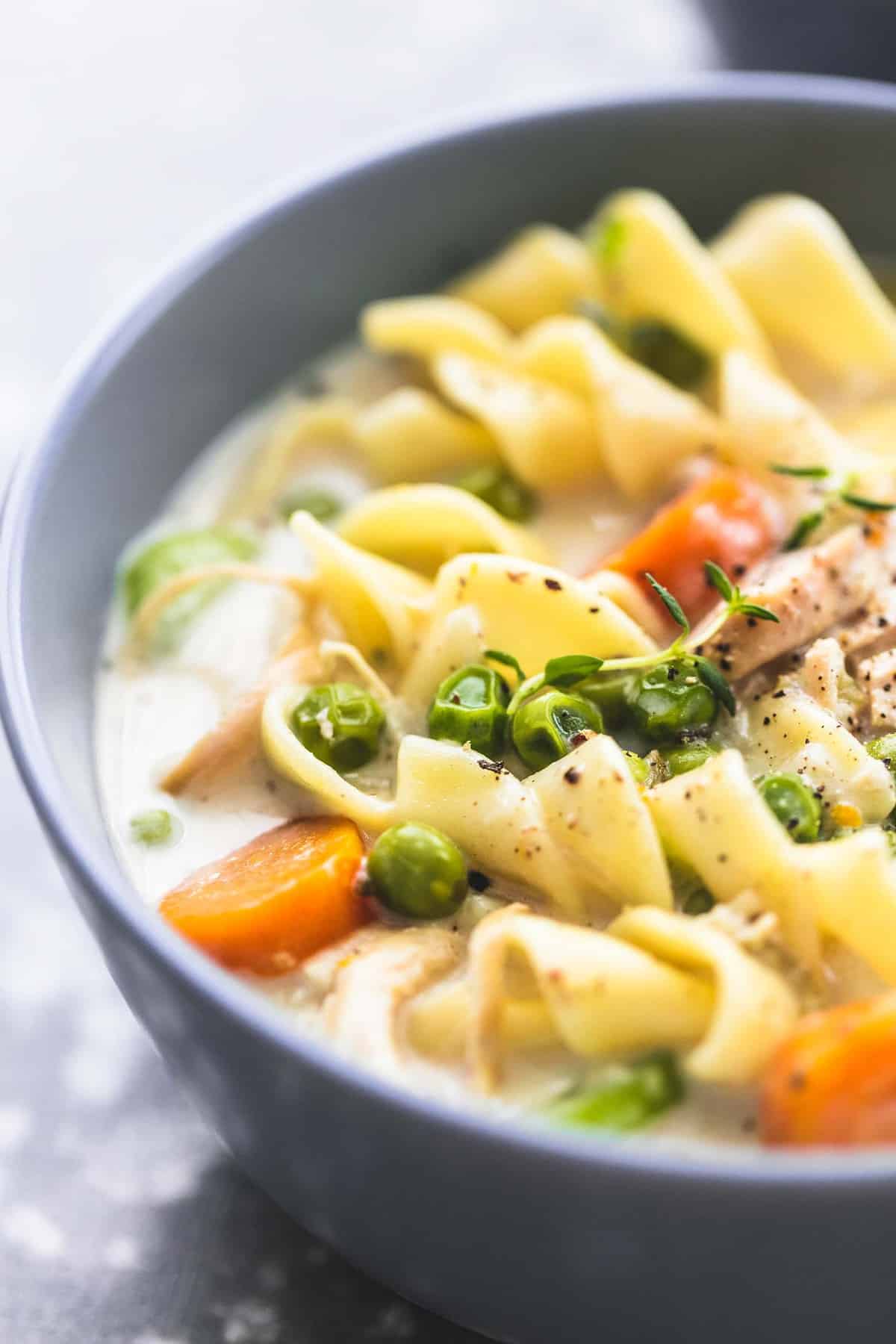 Slow Cooker OR Instant Pot Creamy Chicken Noodle Soup with the perfect blend of flavors makes a healthy, hearty meal made in the pressure cooker or crockpot!
4.85 from 19 votes
Print Pin Rate

Course: Main Course
Cuisine: American
Author: Tiffany
Did You Make This Recipe?Tag @cremedelacrumb1 on Instagram and hashtag it #cremedelacrumb!