This is the best, easy tuna steak marinade! All you need is a few simple ingredients and 30 minutes to infuse your tuna steaks with deliciously bold flavor – zesty, with fresh herbs, garlic, a hint of sweet honey, and savory spices.

Tuna steak is one of my favorite fish to make. It’s so meaty and easy to cook and tastes delicious. This marinade for tuna steaks couldn’t be any easier – it’s full of simple ingredients you probably already have (think oil, honey, garlic, cumin, parsley). And all you have to do is put the altogether and let the tuna steaks marinade for 30 minutes and grill!

Note: If you don’t want to grill the steaks, you can sear them in a skillet over medium-high heat or broil them in the oven at 400 degrees.

So. Easy. – I cannot stress how simple this tuna steak marinade is. Five minutes! Just 5 minutes that’s all you need to throw the ingredients together and put the tuna in the marinade. It can’t get any faster I promise.

Fast – In addition to being easy, it’s also so fast. As in, the marinade works in just 30 minutes. And, honestly, any longer and the lemon juice in the marinade will start to break down the tuna steak, and you don’t want that.

Delicious – This marinade for tuna steaks is super tasty. The bit of sweet from the honey, the touch of tart from the lemon, a little bit of garlic, cumin, cilantro, parsley, and paprika – I’m telling you it’s the perfect flavor combo!

Versatile – Eat the tuna alone, Add it on top of noodles or rice, serve it with roasted broccoli or a side salad…it really is the chicken of the sea (ha ha).

How to Cook Tuna Steak

Cooking tuna steak is really easy! I prefer to grill it. You only need to grill tuna steak for 6-8 minutes on each side. You can also cook it on a grill pan or non-stick pan indoors or bake it in the oven at 400 degrees.

Ideally, tuna steak is best when cooked medium-rare and quickly over high heat. If you prefer your tuna steak well done, you’ll need only a minute or two more on each side (depending on the thickness of your tuna steak). Be sure not to overcook it or it will dry out and not taste nearly as good.

Is Tuna Steak Good For Eating?

Not only is tuna steak delicious, but it’s also good for you, too. It’s low in calories and full of good fat and is packed with vitamins and nutrients like niacin, protein, vitamins B6 and B12, vitamin D, phosphorus, selenium, and of course, omega-3 fatty acids.

Does Tuna Steak Need to be Cooked Through?

Tuna steaks can be served from almost rare to completely done (unless, of course, you’re eating sushi-grade tuna from a reputable sushi restaurant). It’s up to you how you like your marinated tuna steak cooked. Personally, I like mine seared/cooked on the outside and a little light pink on the inside.

There are several kinds of tuna steaks. The most common you’ll find at the grocery or seafood shop include yellowfin, albacore, bigeye, and bluefin.

Albacore tuna is mostly found canned but can also be found as a tuna steak. It’s milder in flavor, but can also contain the most amounts of mercury, so eat that kind of tuna sparingly.

Yellowfin tuna is also mild in flavor and is often used in sushi. It’s meat is leaner than some of the other tuna steak types.

Bigeye tuna is darker, meatier, and has a stronger taste than other tuna types. However, bigeye tuna is at risk of being overfished so if you buy it make sure it’s been labeled as being caught in a sustainable way.

Bluefin tuna is the most expensive of the tuna steaks and can be found mostly served as sashimi in sushi restaurants. They’re big and meaty and very flavorful.

Salmon is the healthiest fish to eat. It’s packed full of protein and healthy fat in the form of omega-3 fatty acids. (Here’s an easy salmon recipe I just love.) Other healthy fish include mackerel, cod, trout, crab, tuna, haddock, and sardines.

The short answer is yes, tuna steak is healthier than beef steak. Tuna contains about the same amount of protein with much less saturated fat. In fact, most of the fat in tuna is heart-healthy monounsaturated and polyunsaturated.

But everything in moderation, right? Beef steak is great once in a while, as is tuna! Mix it up!

Did you make this recipe? AMAZING! Tag me on social and please rate the recipe below! 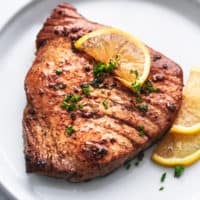