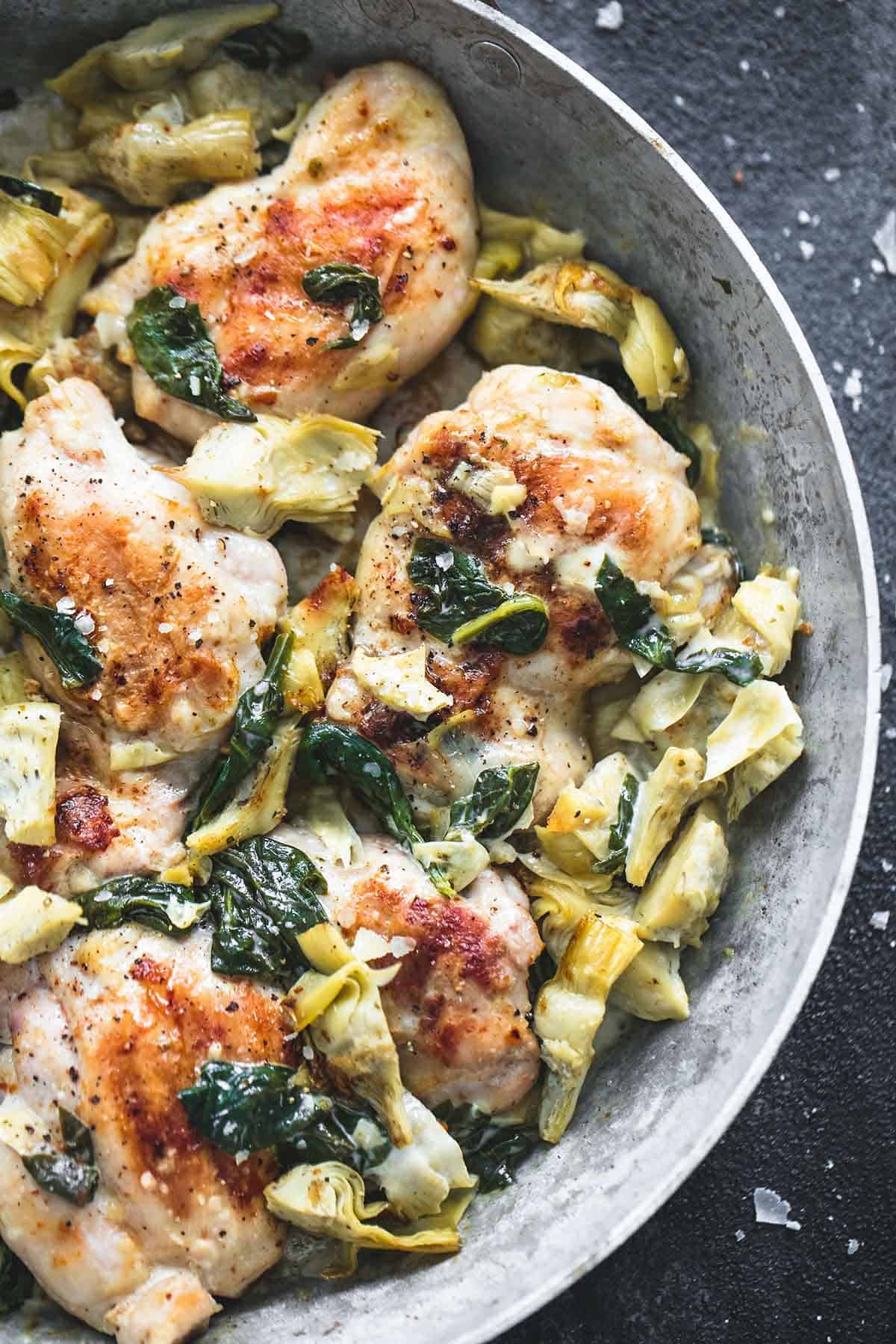 I’ve been indulging myself lately. My husband has been out of town five out of the past six weeks and I’ve been making dinners that are one hundred percent catered to my tastebuds. I never look forward to these big travel stints but I’m not gonna lie, I do eat some really good food when he is on the road.

Just making the best of the situation you know? 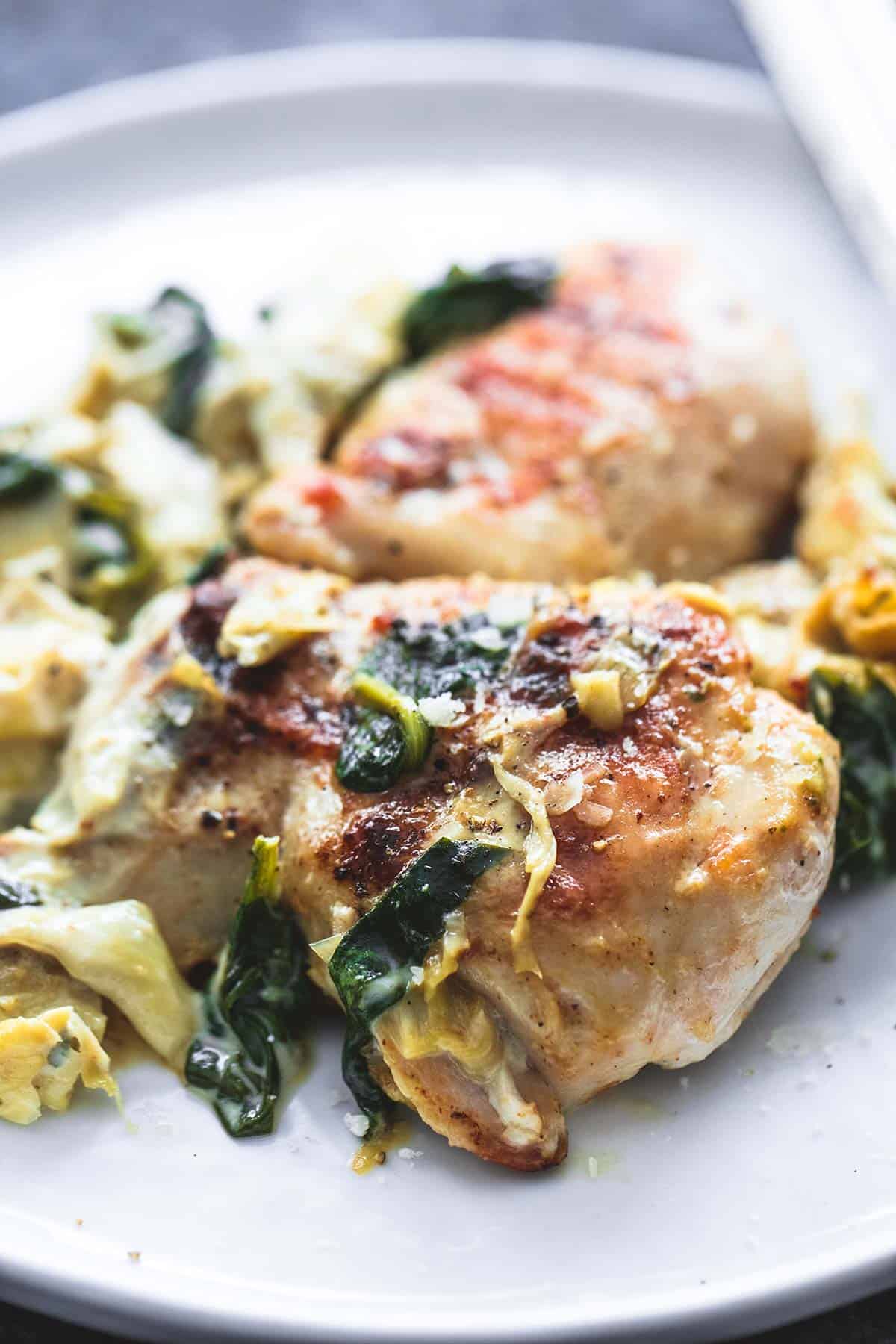 So what kind of food happens when he’s not going to be sitting down to dinner with me that night? A lot of tomatoes, mushrooms, quinoa, and artichokes. He really hates tomatoes and artichokes, quinoa is meh – he’ll eat it but he definitely wants it with some kind of meat and I could eat a big bowl of it sans meat – and artichokes he doesn’t dislike, but he isn’t as crazy about them as I am. I loooooove me some artichokes. Give me a whole roasted artichoke with melted butter and I’m in heaven. 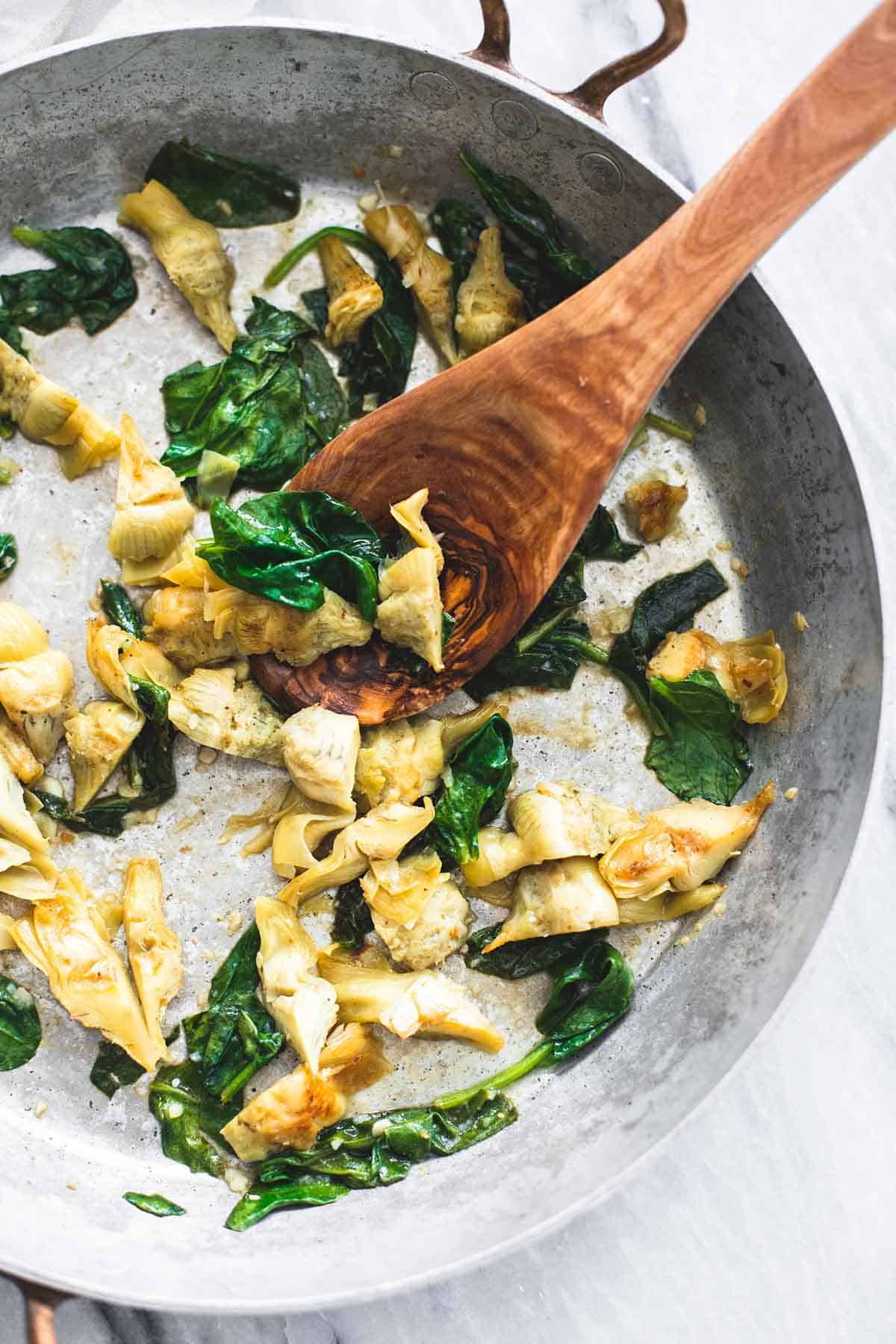 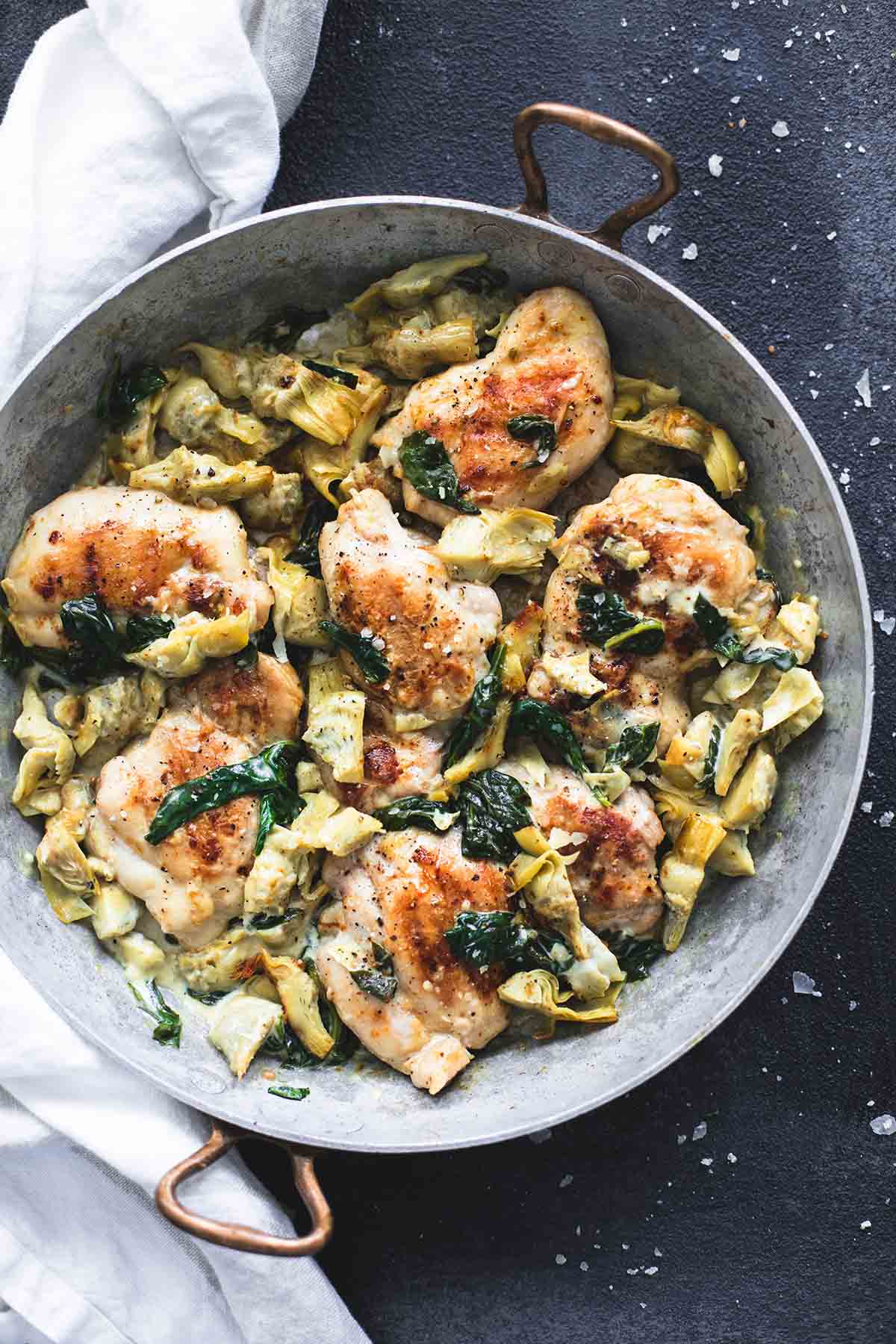 If you are a fan of spinach artichoke dip (seriously. if?? is there even an IF here?? how can you not love spinarti dip?!) then you will be totally on board with this skillet spinach artichoke chicken. We’re talking pan roasted artichokes with garlic and spinach, whisked into a light and creamy white sauce, and served with very lightly breaded and browned chicken with the perfect topping of parmesan cheese. 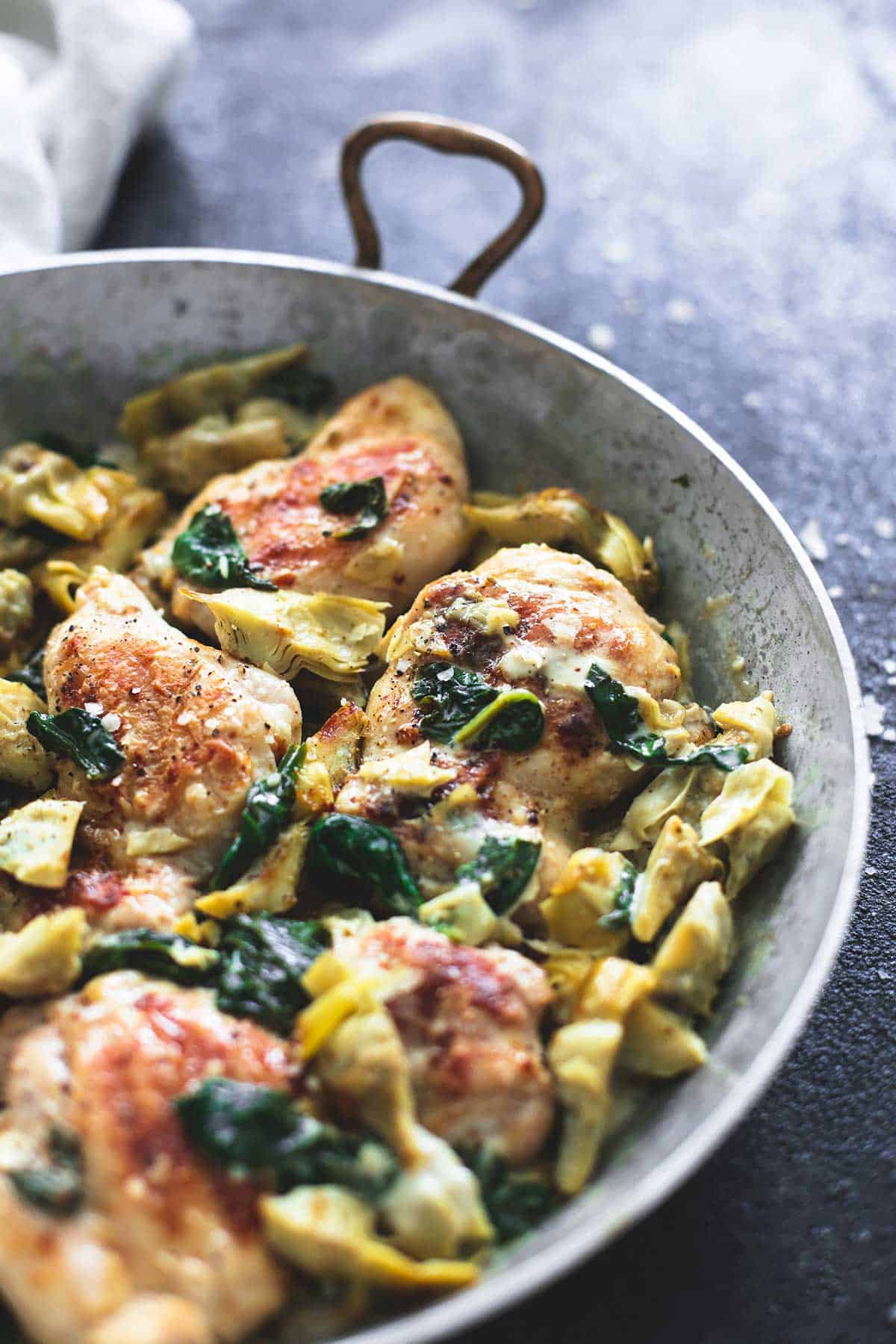 I might also add that this dish will only take you 30 minutes and you can use chicken breasts or thighs – whichever you prefer – and even lighten up that sauce by using half n’ half instead of heavy cream if you want to. BAM. Customizable, tasty, quick, one pan… what more could you ask for?! 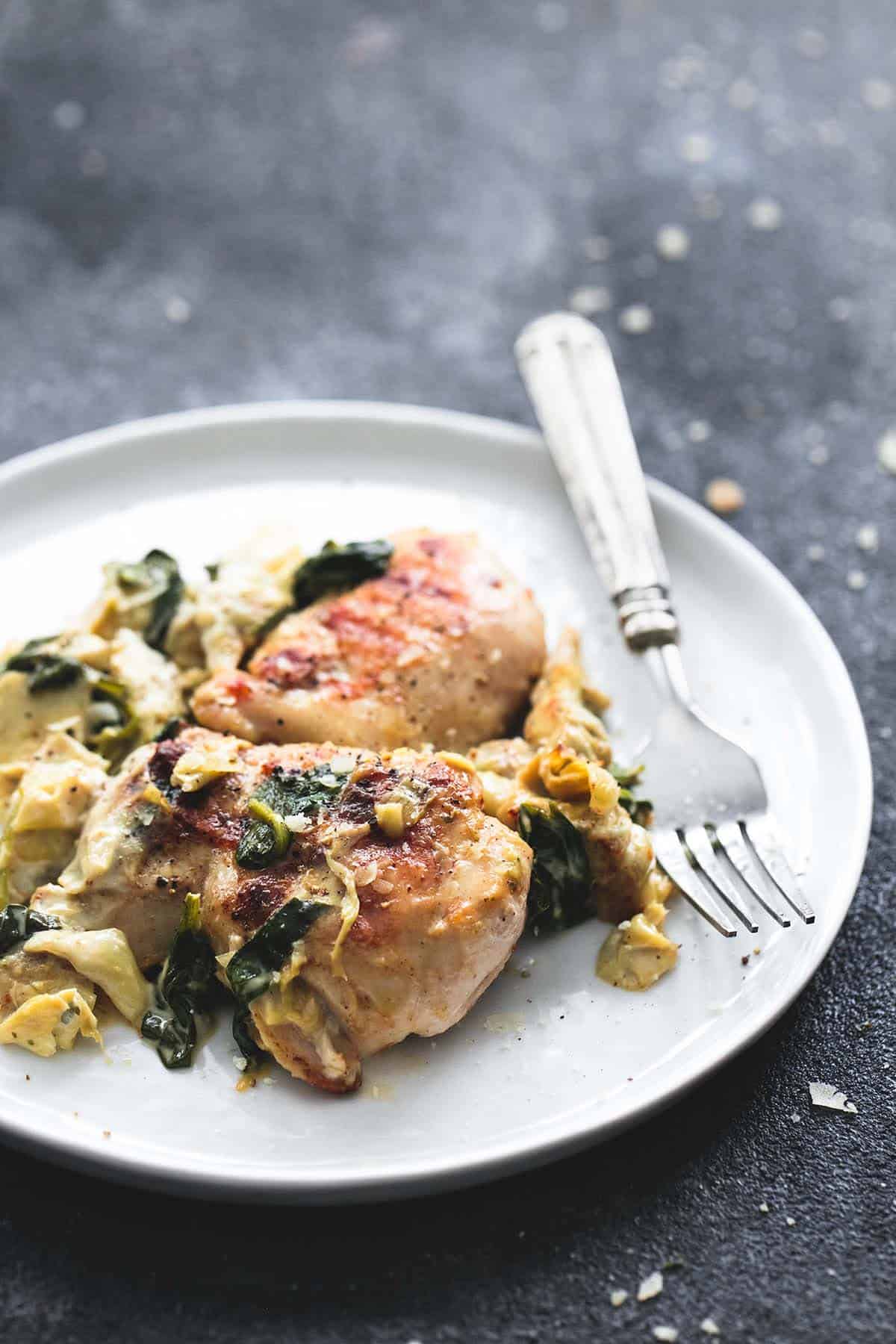 What people are saying about this Skillet Spinach Artichoke Chicken

“This was honestly the best thing I’ve cooked in a long time. I doubled the spinach, which was perfect—I may even triple it next time as it really does cook down. I personally chose to add salt and pepper to the flour and then dunk the chicken in an egg wash to help the flour stick, but that’s how I was taught. I also added salt and pepper throughout the cooking process. Very minor changes to an awesome recipe. I’m convinced it would turn out good as written, too.” – Christi

“Honestly the best new dish I’ve had in ages. Actually only took 30 minutes and was …. perfect.” – Christine

“Oh my goodness! I made it for dinner tonight! Huge hit with my husband and 2 teenage sons! Quick, easy and delish! I’ll definitely make again!” – Vicki 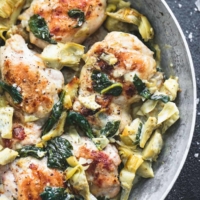 You can sub another milk, such as Half and Half for the heavy cream for a lighter version - note that the sauce will be slightly less rich and not quite as thick if you don't use heavy cream but still very delicious.