This Southwest Corn Chowder recipe is SO tasty and easy to make in less than 30 minutes. Potatoes, corn, garlic, onion, and green chilis in a rich and creamy base. This is the soup you’ll crave all year long!

For more amazing soup recipes to make this week, try my recipes for Chicken and Rice Soup, Sausage and White Bean Soup, and Potato Soup.

I make corn dishes all the time in the summer, because that’s when it’s front-and-center on my mind. From farmers market stands to taking up the prime spot in the grocery store, good old fashioned corn on the cob is a can’t-miss.

That’s a long winded way of saying, I forget about corn in the winter. However, when I was thinking about a new soup to make, corn just popped into my head. I haven’t had a good corn chowder in a long time and felt it was time to remedy that! I added a Southwest flair to it because, well, I guess it was just speaking to me. Turns out this corn chowder recipe is everything I love about summer in a warm, comforting bowl of soup.

Green chilis — I add these little gems to lots of my chilis but adding them to this Southwest corn chowder recipe just makes sense. A little color, texture, and whole lot of flavor in just one little 8-ounce can.

Potatoes — Corn chowder is great on its own, but needs the starchiness of potatoes to thicken the soup and give it a better texture. Plus, I like to have a little something to chew in my soup.

Half and half — Believe me, this corn chowder needs the creaminess of the half and half to really make all the ingredients come together, otherwise, it’s just too thin.

Grilled corn — Whether you use corn on the cob or canned corn, don’t skip the step of grilling or charring the corn first before adding it to the soup. The depth of flavor you get from doing this is really important to making the BEST Southwest corn chowder ever.

Ready to make the BEST corn chowder recipe ever? It’ll take you less than 30 minutes – let’s get started!

Is It Better to Grill Corn in The Husk?

This is complete personal preference. Personally, I prefer to remove the husks prior to grilling because I like to get a decent amount of char on the kernels, BUT some people would argue that keeping the husk on prevents char (which some do not like) and keeps the corn moist. Either way, you can’t go wrong in my opinion. Simply keep an eye on the corn and turn it regularly to keep it from getting burned or dried out.

If you want your corn grilled but not charred, you can soak your corn, in the husk, in a pot of water first for about an hour before grilling. By the time the husks and silks dry out from the grill, the corn will be nice and steamed without getting charred.

What Makes a Chowder a Chowder?

A chowder is a type of soup that’s very filling and rich. It usually starts by sautéing a mixture of vegetables, onions, and/or garlic. It also often includes seafood or chicken in it but can also be vegetarian like this corn chowder.

Most corn chowder recipes also have a creaminess to them, but there is a tomato base in Manhattan clam chowder.

Did you make this Southwest Corn Chowder recipe? EXCELLENT! Please rate the recipe below! 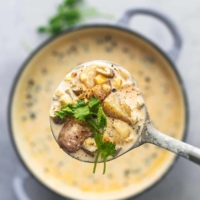