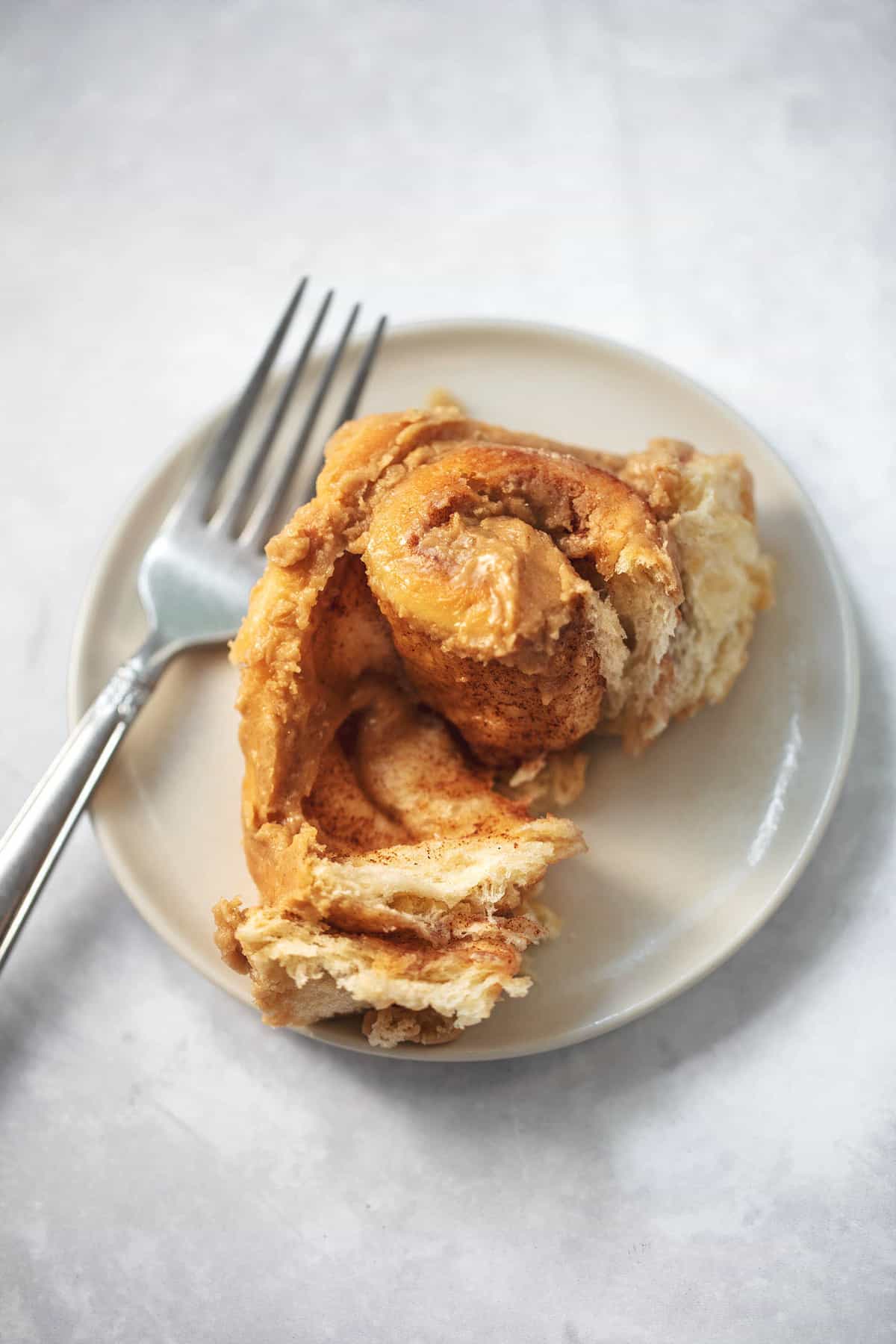 If there’s one thing I can’t get enough of, it’s cinnamon rolls. Pumpkin, red velvet, cinnamon toast, French toast, or eggnog; made in a slow cooker, overnight, or stuffed in apples; or in crepe, muffin, or dipper form, I cannot stop. I will not stop.

Really, there’s no reason to. Just writing about cinnamon rolls conjures up about five more ways to make them. (But I’ll save those for later.) Despite their specific shape and multi-layered taste, they aren’t that hard to make. My secret ingredient is Fleischmann’s RapidRise Yeast, because while I’m not going to stop making these rolls any time soon, I do like to speed up the process whenever possible and Fleischmann’s yeast certainly helps with that. In fact, it’s the only yeast I use when making breads, rolls, and even pizza crusts.

So if you were on the fence about making cinnamon rolls for the upcoming holidays (or any time, really), let this be the recipe to get you over to the other side. They will not disappoint even the pickiest guests or family members. No time for baking before breakfast? They make a great dessert too! 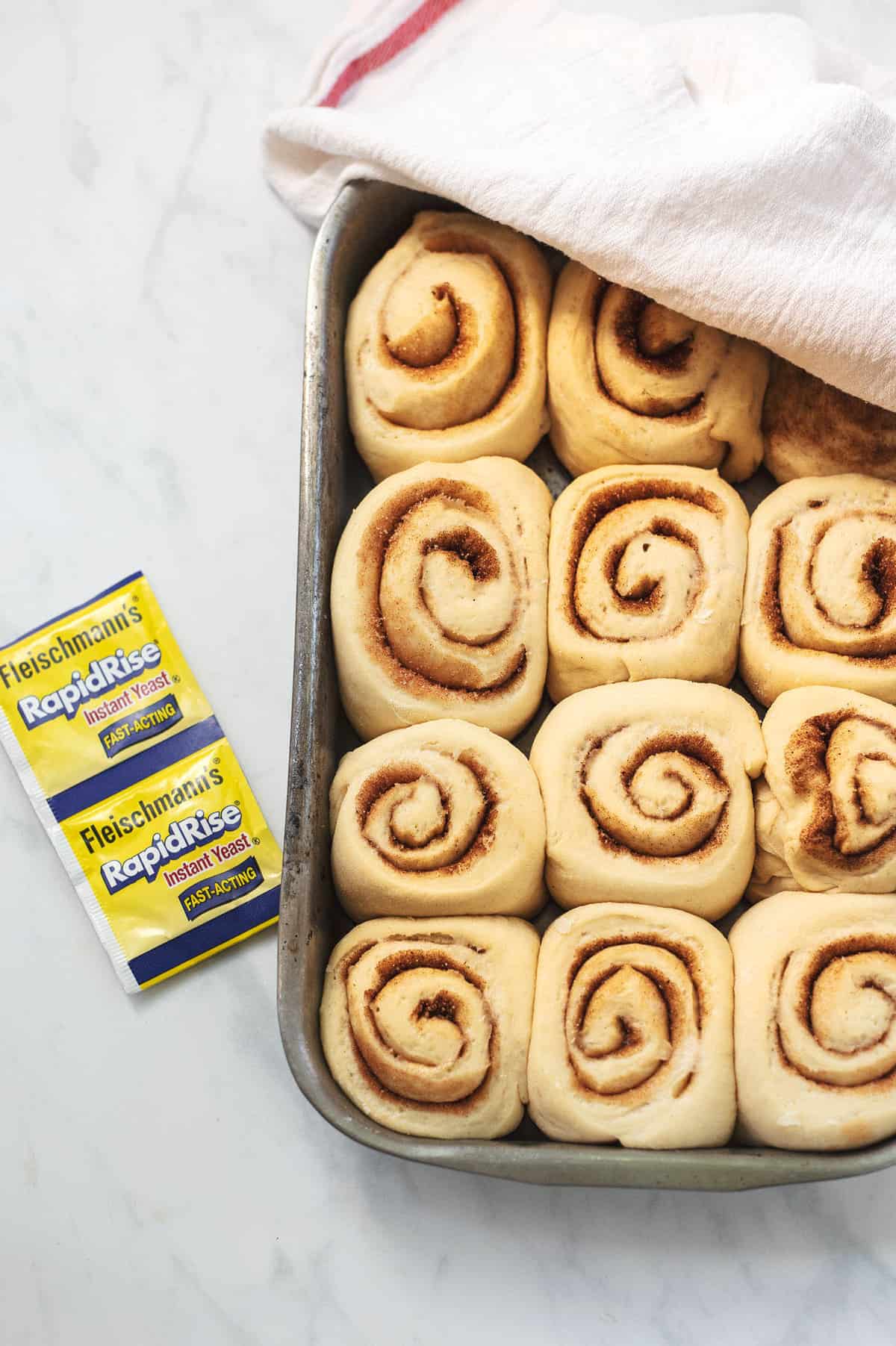 WHAT EXACTLY IS YEAST?

That’s a great question. We use so many ingredients without questioning, isn’t it fun to learn a little something once in a while?

Yeast is of utmost importance when making breads and doughs. It’s what makes the bread rise, after all. Yeast is a living organism. (Though saying that makes me feel a bit bad about it living in my pantry in a dark envelope.) When added to your flour, and given some warm water, it will eat the starches in the flour, developing the gluten and producing carbon dioxide. The C02 makes the gluten proteins expand in the flour and makes it expand and rise. Fascinating, right? Yeast also gives breads that yummy, well, “yeasty” flavor.

Without yeast in these rolls, you’d have a flat, cardboardy, hard mess of dough and sugar and cinnamon. I’d probably still eat it in all truthfulness because, well, sugar and cinnamon, but I wouldn’t enjoy it even half as much. 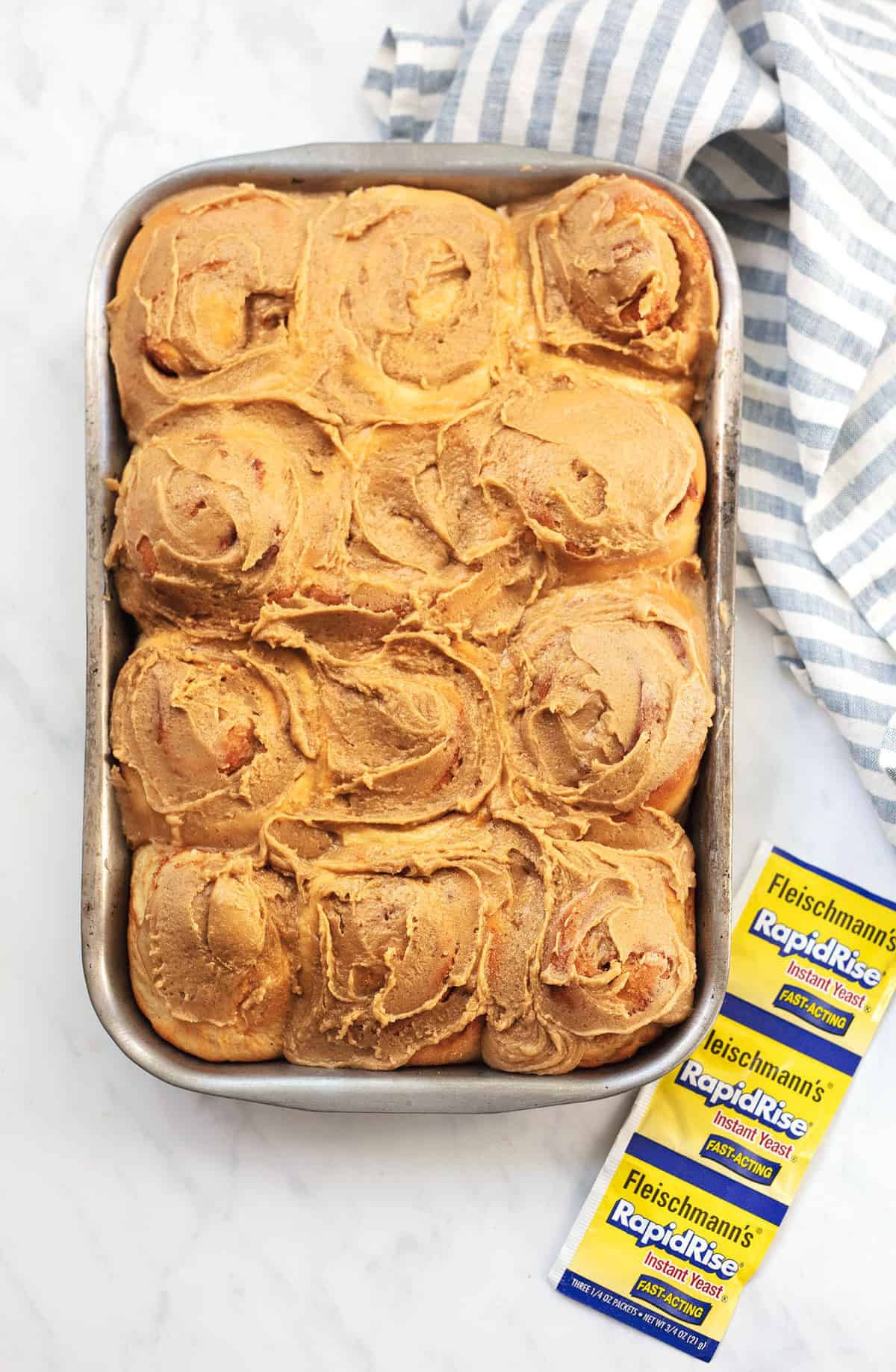 HOW DO YOU KNOW WHEN CINNAMON ROLLS ARE DONE?

If, after the 25-30 minutes I suggest for baking, you’re still not sure if these Super Soft Cinnamon Rolls are done, you can test them. Take them out of the oven first. Use a fork or a butter knife to gently lift up a roll in the center. If the dough is still looking a bit raw, but it back down in its spot and into the oven for another 5-10 minutes.

When they are done, they should all look golden brown on the top and centers all baked through. Nothing’s more disappointing than biting into a cinnamon roll and finding the center isn’t done. It’s not like cookies or brownies where you’d probably power through and still enjoy it. Raw bread dough isn’t so delicious when it’s not cooked thoroughly. 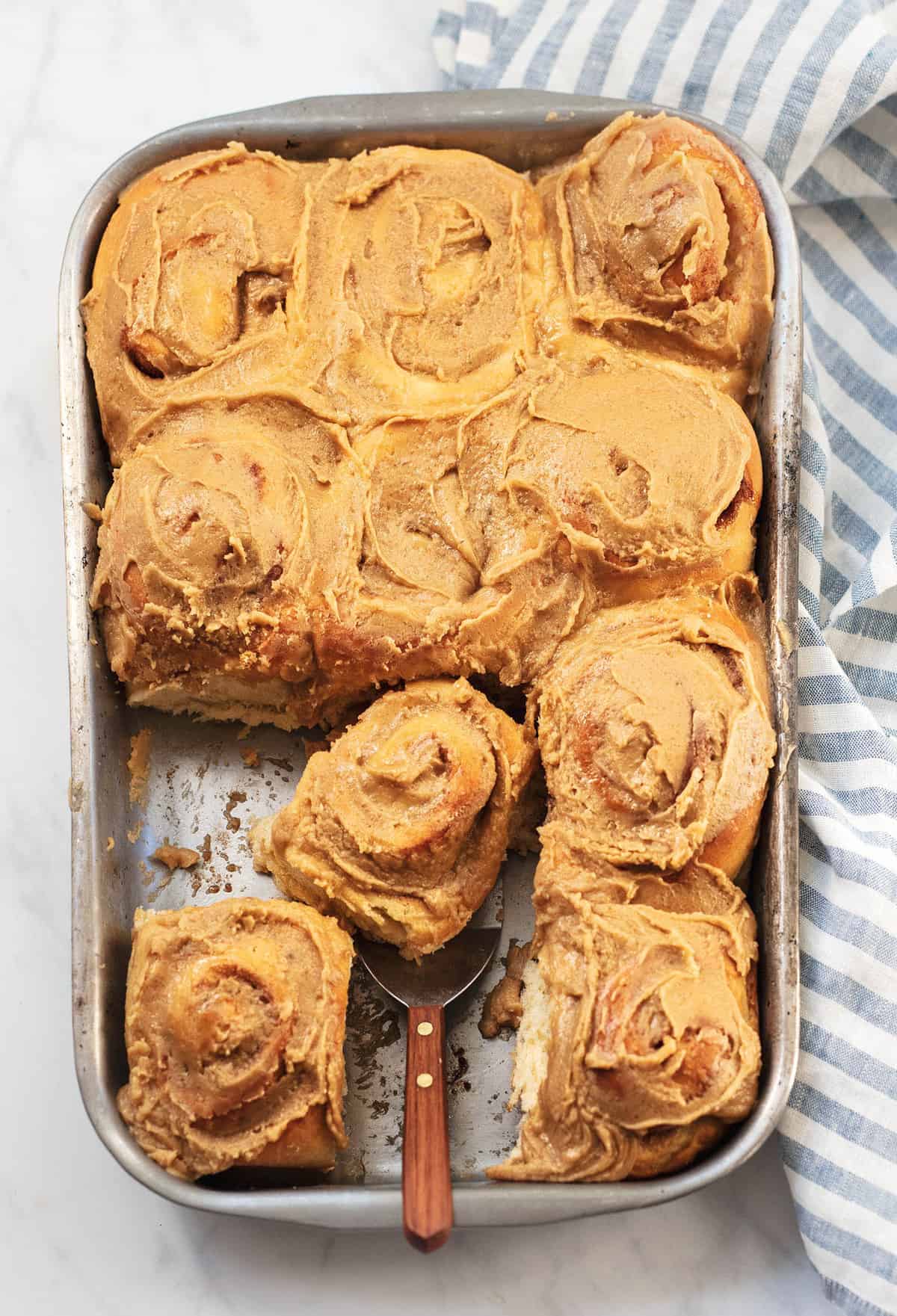 WHAT KIND OF ICING IS GOOD ON CINNAMON ROLLS?

If you’d like other options for your cinnamon rolls, icing-wise, you’ve come to the right place. Use the recipe here for Brown Sugar Frosting or try any of these other delicious icings.

If you haven’t added these Super Soft Cinnamon Rolls with Brown Sugar Frosting to your holiday baking list yet, what are you waiting for? They’re so delicious and easy to make thanks to Fleischmann’s RapidRise Yeast. Make them once and I promise you’ll be back for more! 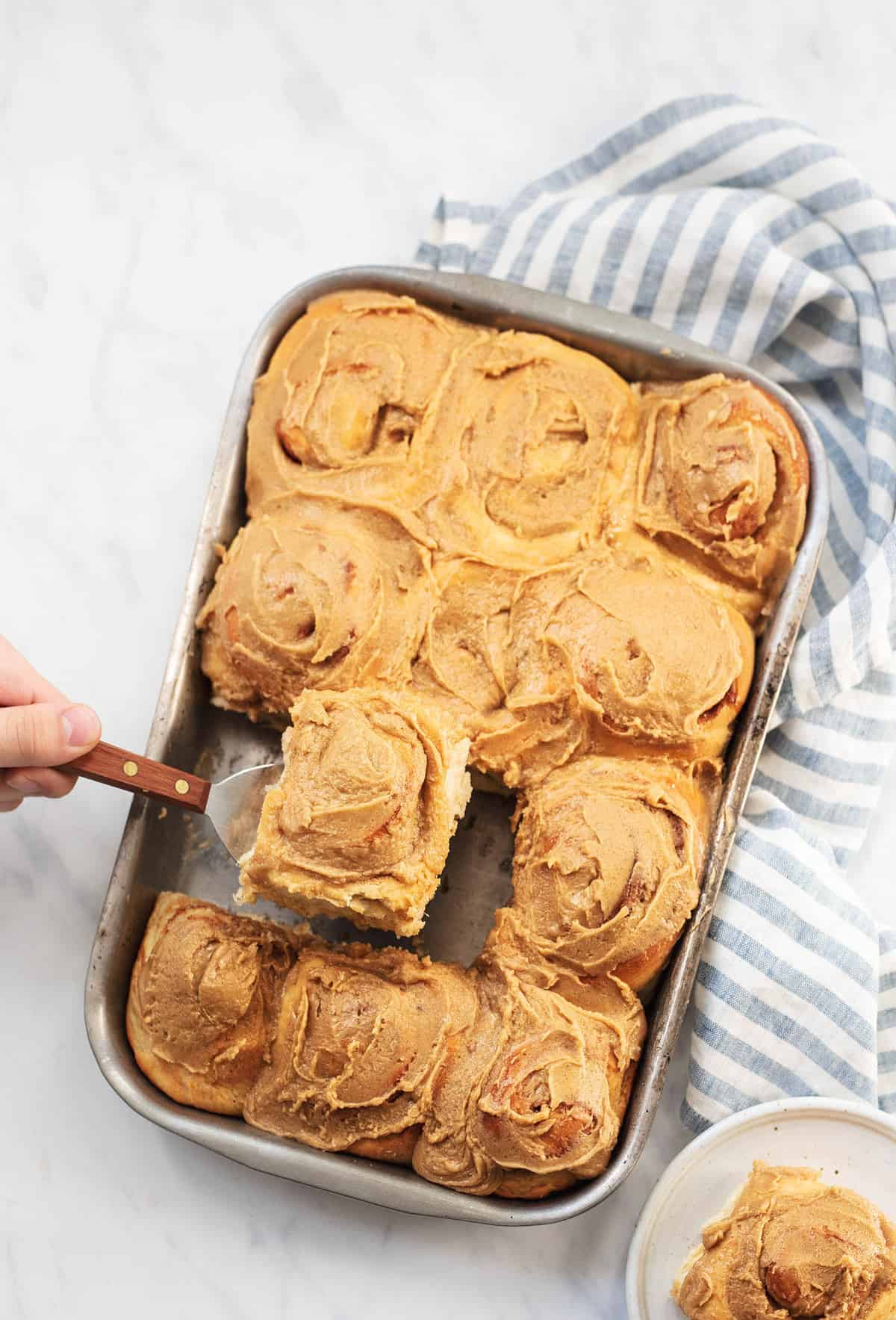 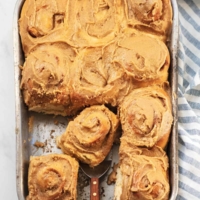