Pumpkin Snickerdoodles are everything fall wrapped in one deliciously sweet, buttery, cinnamon-dusted cookie you’ll want to make (and eat) over and over again.

If you love the taste of pumpkin in desserts, then you’ll also love my Caramel Pecan Pumpkin Cheesecake, my Pumpkin Cinnamon Rolls, and my Pumpkin Cookies with Brown Sugar Frosting. 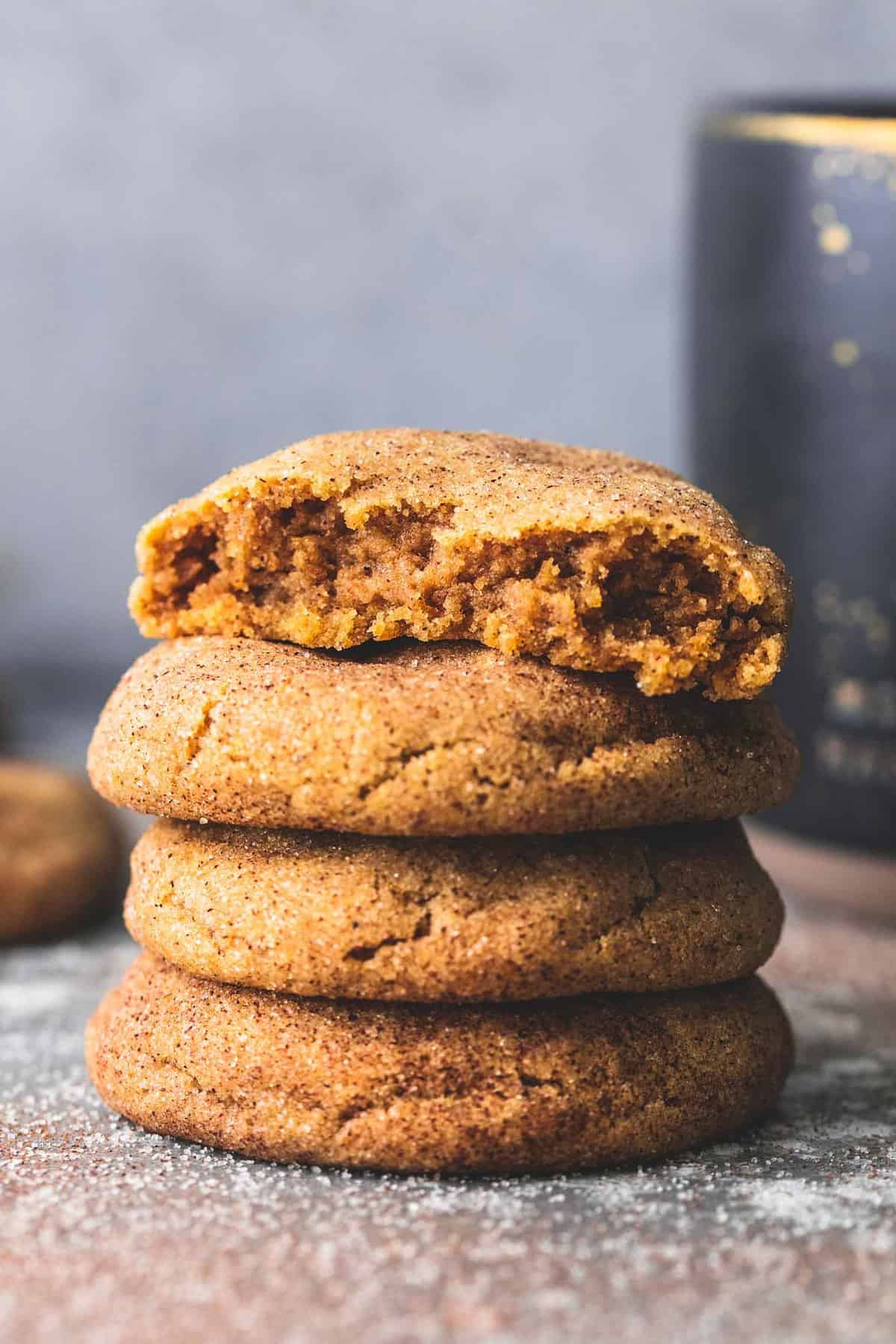 Cooler weather is just around the corner! And fall just happens to be one of my favorite seasons because it marks the beginning of my fall baking addiction. I like to get my pumpkin on earlier and earlier every year because it has such a short time frame in the grand scheme of things and so why not pack in all the pumpkin I can while I can?

I love the smell of pumpkin (when the scent of it baking fills up my house especially), the taste of pumpkin, the color of pumpkin. It’s about one of my most favorite scents and flavors, in my favorite time of year. So I’m getting started early and I’m going to keep up all the pumpkin through at least Thanksgiving until I inundate you with all things peppermint. That’s just how it goes! Life is fleeting. Grab the pumpkin while you can, I say. 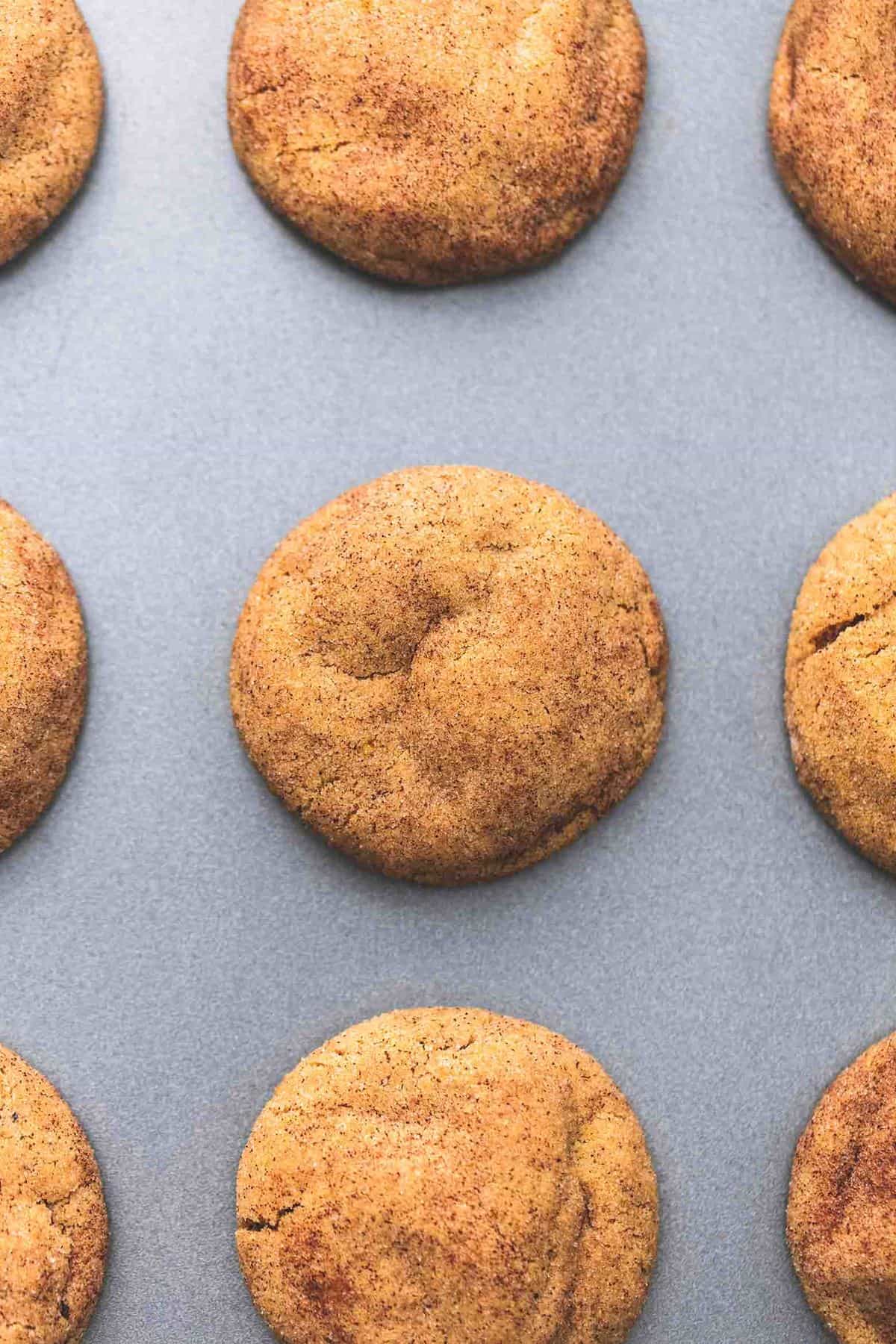 HOW DO YOU MAKE PUMPKIN SNICKERDOODLES?


The first thing I do is get out a couple of bowls, my mixer, spoons, spatulas, measuring cups, and all my ingredients. In a small bowl, I mix together sugar and cinnamon and set that aside.

Next, I preheat the oven and prepare my baking sheet. I get out the larger bowl (I use the mixing bowl that comes with my stand mixer, but you can use a larger bowl that works with your hand mixer as well). In this larger bowl, I cream together the butter and sugars. Next, I add in the vanilla and pumpkin and mix that together into the butter and sugar mixture. To this I add the flour, cream of tartar, baking soda, and spices and mix all of that till it’s combined and you can no longer see any of the flour.

I use a cookie scoop or a tablespoon or two to create individual dough balls, which I think roll into the cinnamon-sugar mixture and put on the prepared baking sheet about 3 inches apart.

To keep the cookies nice and thick, I “fluff” them up vertically somewhat, that way when they start to cook and spread, they don’t do that too much. These bake for 8-10 minutes. Once I pull them out of the oven, I allow them to cool for about 5-10 minutes on the baking sheet, then I put on a cooling rack to finish the cooling process. Finally (if you’ve waited this long), eat! 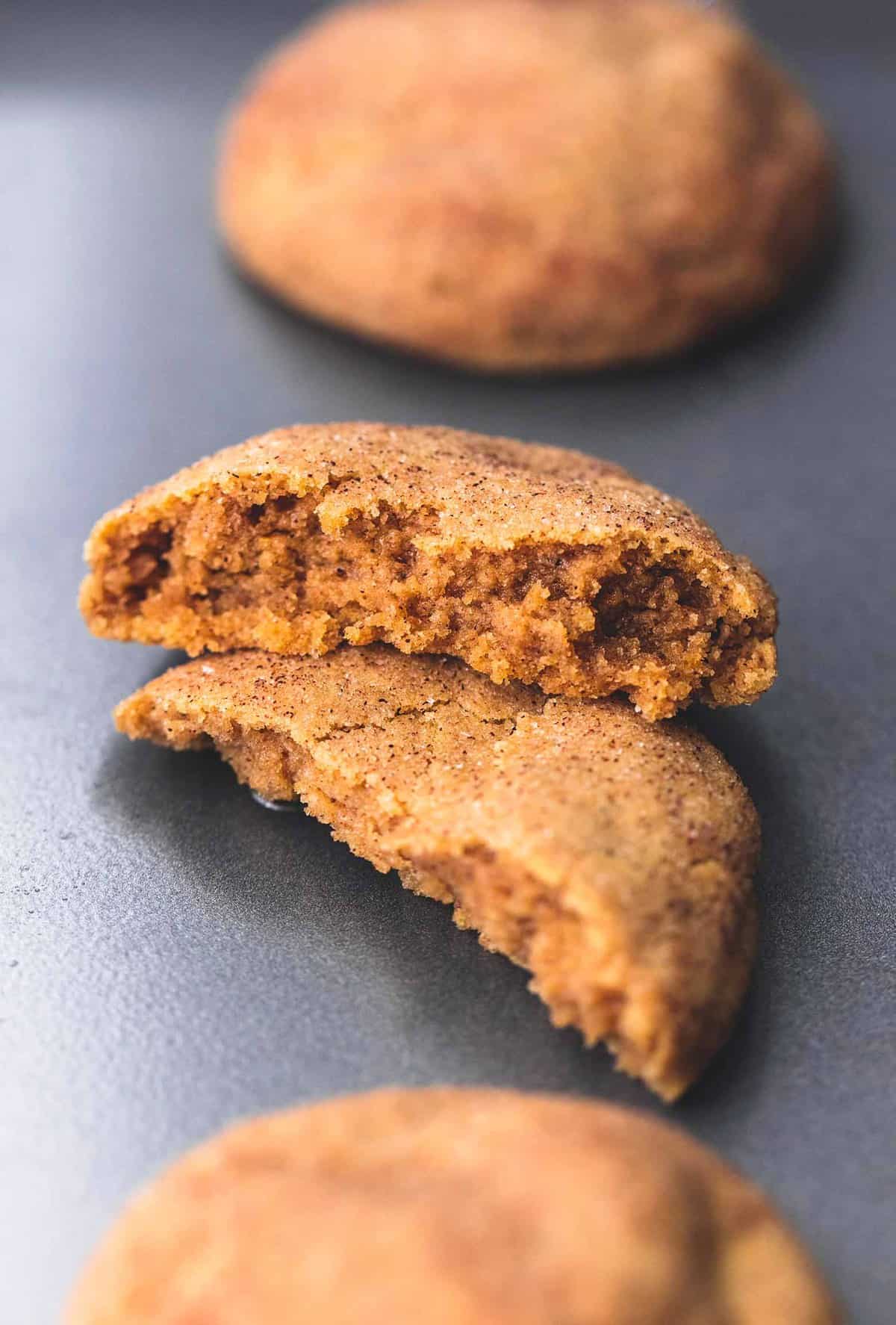 WHAT IS CANNED PUMPKIN?

Canned pumpkin is simply pureed, canned pumpkin. Pumpkin pie filling is pureed pumpkin with all the spices in it already that you’d put into your pies — cinnamon, cloves, ginger, clove, etc.

For this recipe, you’ll want to use the plain pumpkin because you’ll add your own spices to it. To use pumpkin pie filling would be to over spice these cookies. 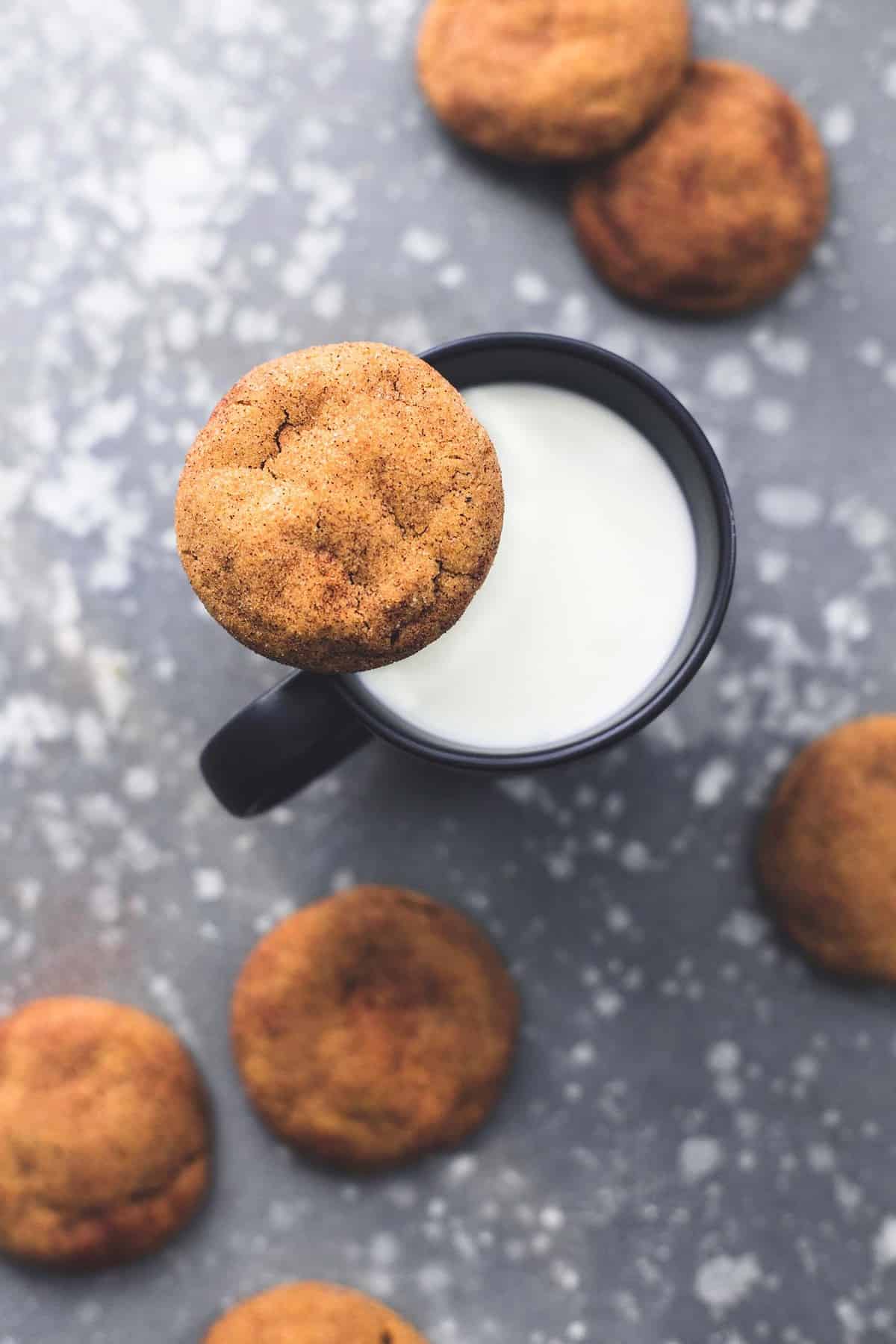 WHAT IS PUMPKIN SPICE MADE OF?

By now maybe you’ve heard of pumpkin spice? I kid, of course. EVERYTHING is pumpkin spice in the fall, not that I’m complaining. But what does this mean, exactly?

Pumpkin spice is essentially all the flavors of pumpkin pie in other baked goods and beverages — lattes, cookies, cheesecake, bagels, granola bars, tea — you name it. It’s typically made from a blend of ground cinnamon, ginger, nutmeg, cloves, and maybe even allspice, depending on the blend. You can make this yourself or purchase it pre-made as a spice blend. 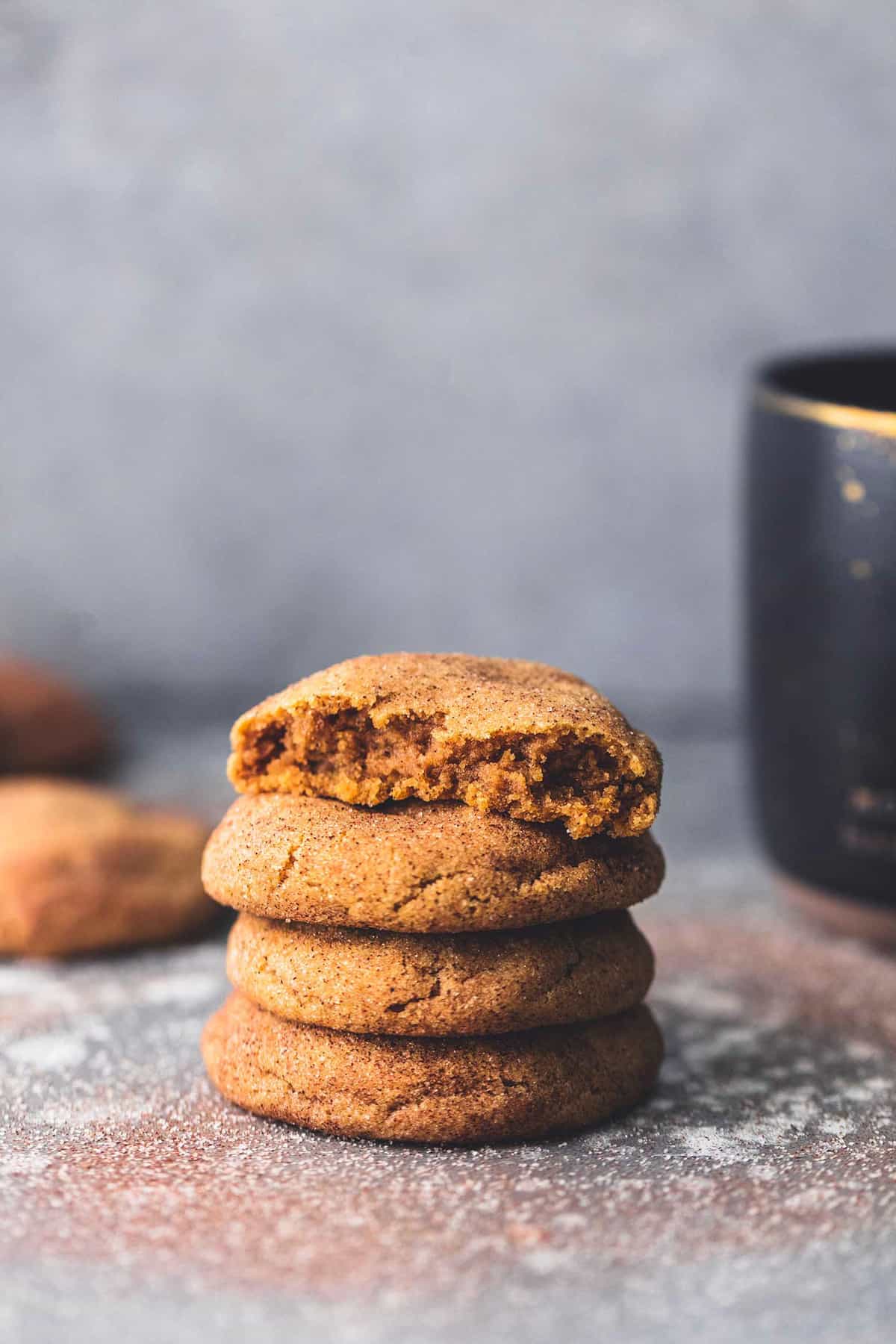 WHAT IS THE DIFFERENCE BETWEEN APPLE PIE SPICE AND PUMPKIN SPICE? 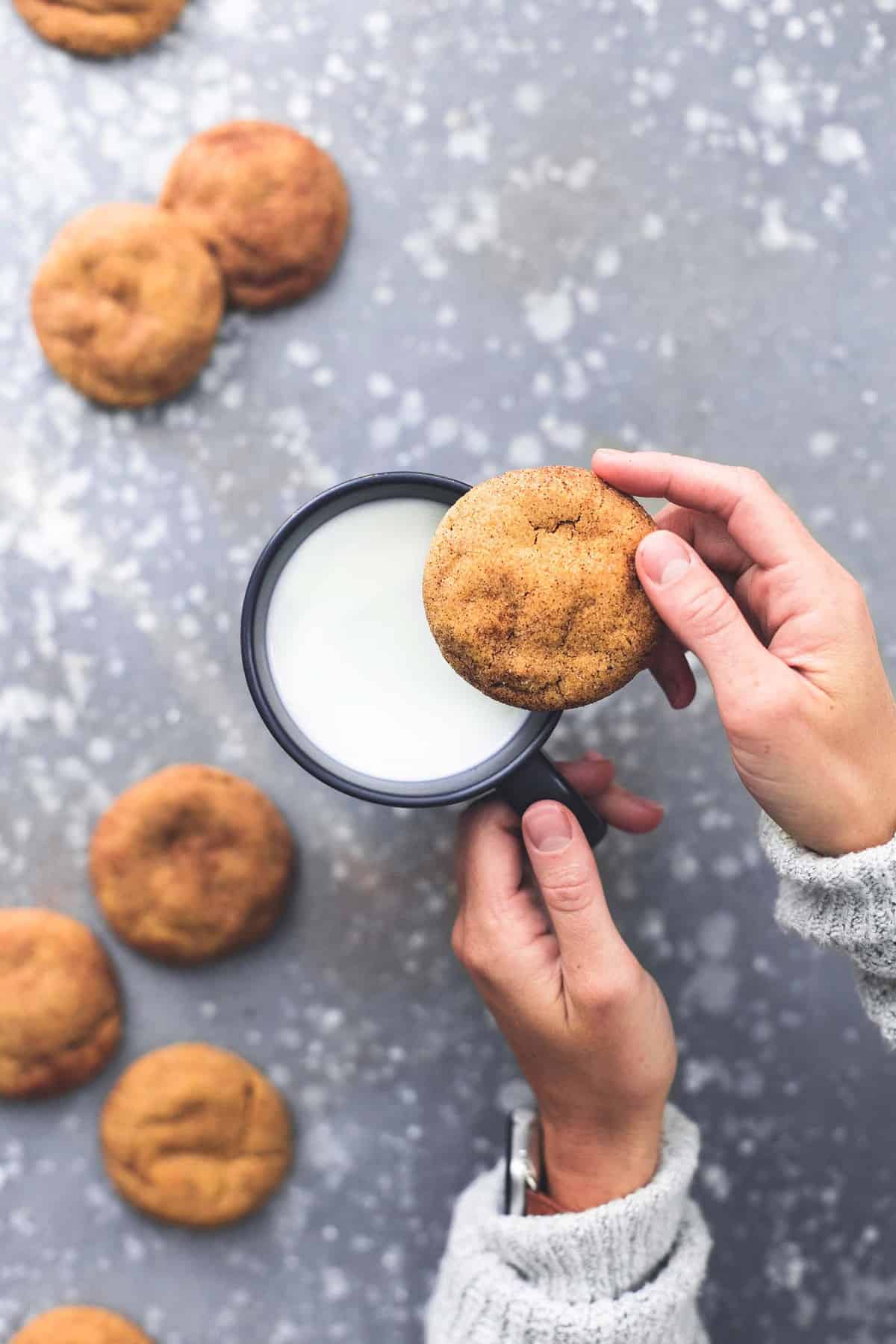 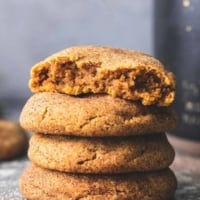 Course: Dessert
Cuisine: American
Author: Tiffany
Did You Make This Recipe?Tag @cremedelacrumb1 on Instagram and hashtag it #cremedelacrumb!