Fluffy cinnamon rolls made from scratch with an easy 30 minute dough, stuffed and baked inside juicy apples and topped with rich cream cheese frosting. The juice from the apple seeps into the cinnamon roll just enough to give it a cinnamon-apple flavor! 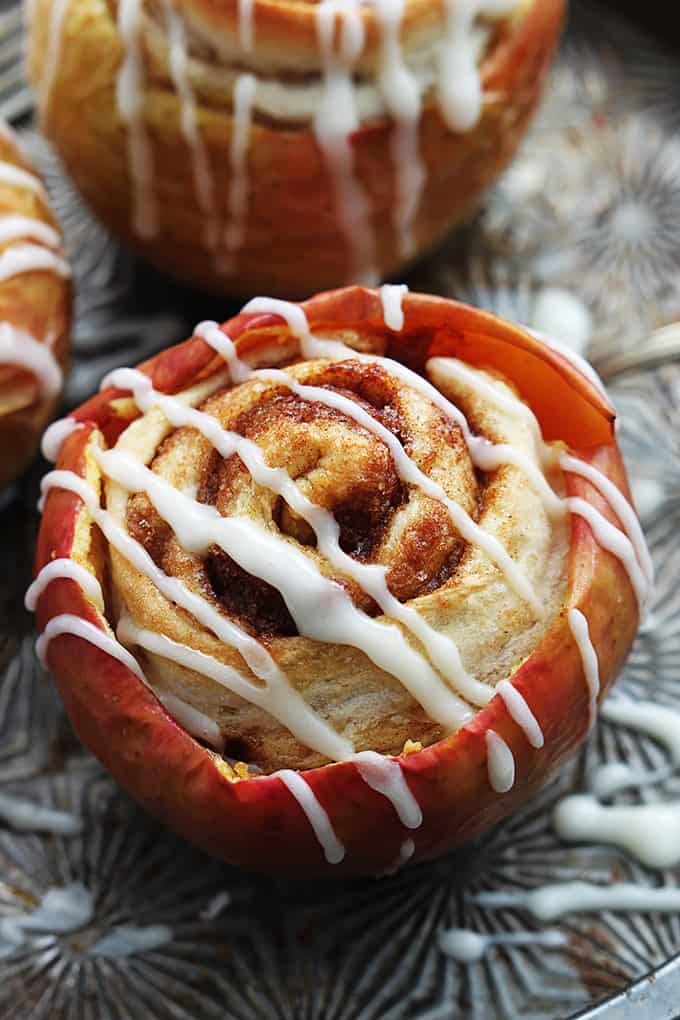 Buckle up people cause I’ve got a whole lotta make-you-crave-a-cinnamon-roll-photos comin’ your way. I know I said I was at the end of my apple-stuffing phase, but alas, I have another. Can you bear to suffer through one more with me? I promise you that it will be worth your time. I mean, it involves cinnamon rolls. Need I say more? 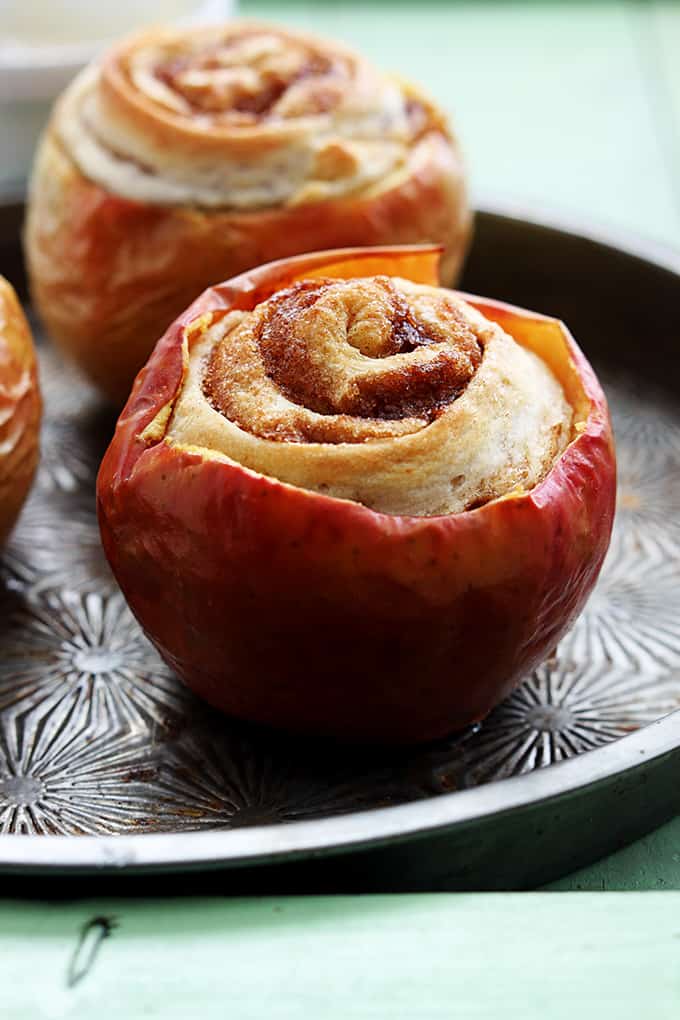 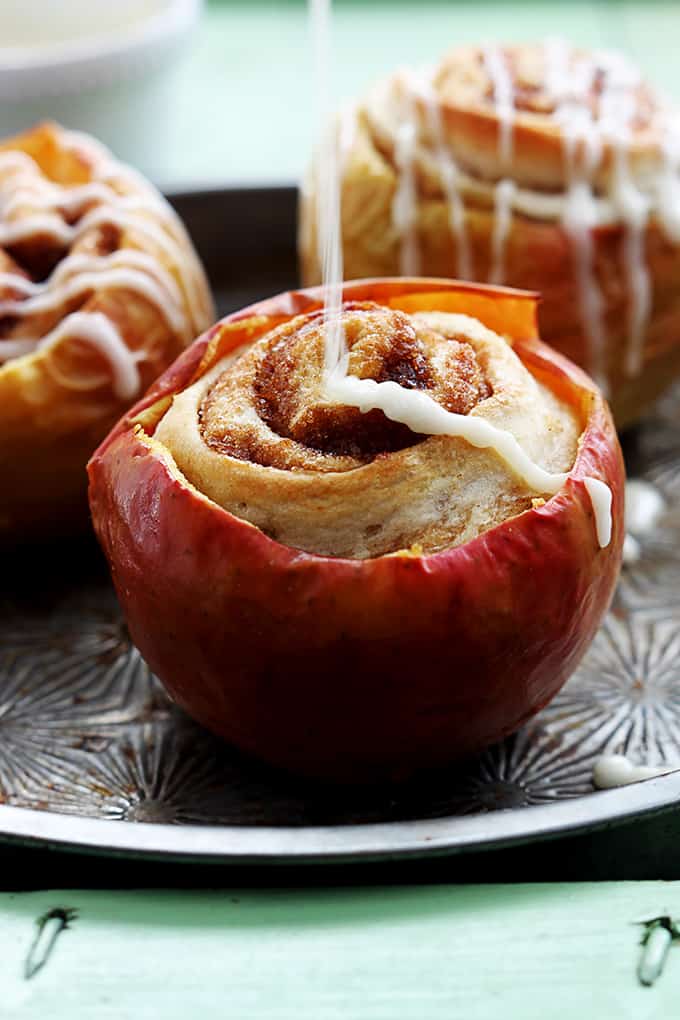 Now first things first, let’s talk dough. Yes, this is a yeast dough BUT before you go running in the other direction, just hear me out for a second. This dough is EASY. Let me say that again in case you didn’t quite let yourself believe it the first time. THIS. RECIPE. IS. EASY. 🙂 Capiche? Good. Now let me tell you why it is easy.

This dough requires only 5 ingredients and 30 minutes of prep before it is in the oven doin’ it’s rising-baking-browning thang. Easy right?? None of that “cover it with a damp towel and let it rise in a warm dry place for a bazillion hours til it has quadrupled in size and a new season has begun” nonsense. And then I look like an idiot running all over the house trying to decide where it’s “warm enough” to place a big bowl of dough and expect it to grow like a weed. Bleh. Call me lazy, call me impatient… I prefer “efficient”. Why wait an hour for your dough to rise when you can wait 10 minutes. No brainer? Um, yes. 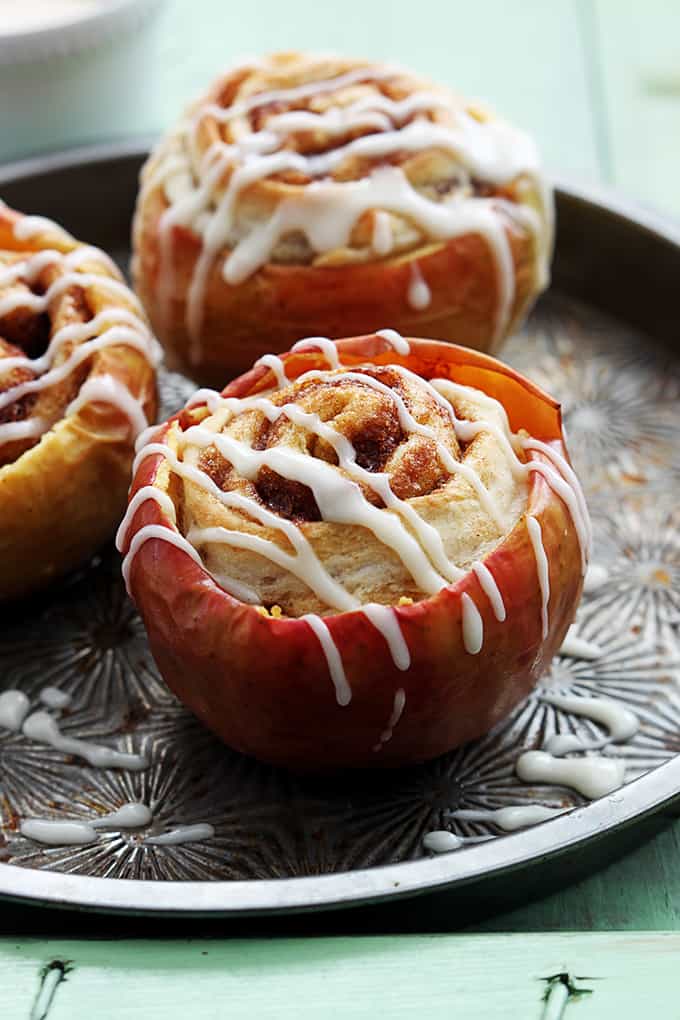 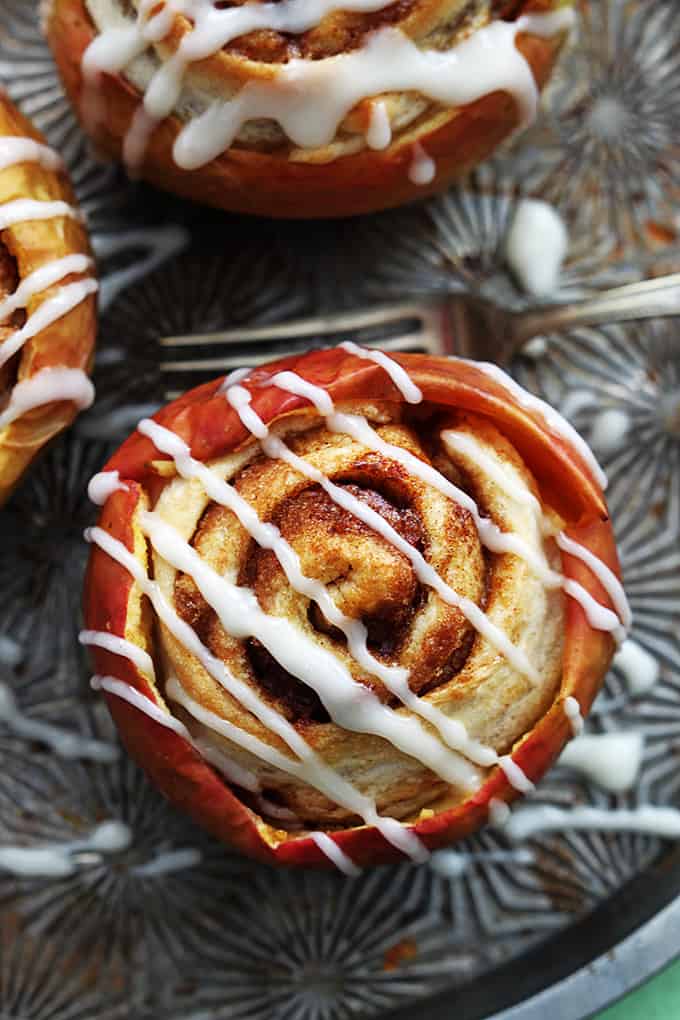 Now let’s discuss this whole putting a cinnamon roll inside of an apple thing. When I first thought of this recipe half of me (the cool half) was thinking oh my gosh this is sheer brilliance! and the other half was thinking – no way Jose, not gonna work. Challenge accepted. I’m here to tell you that yes, cinnamon rolls can be baked inside of apples, and yes, they are easy, and yes they are absolutely 110% better than your average everyday baked outside of an apple cinnamon roll. 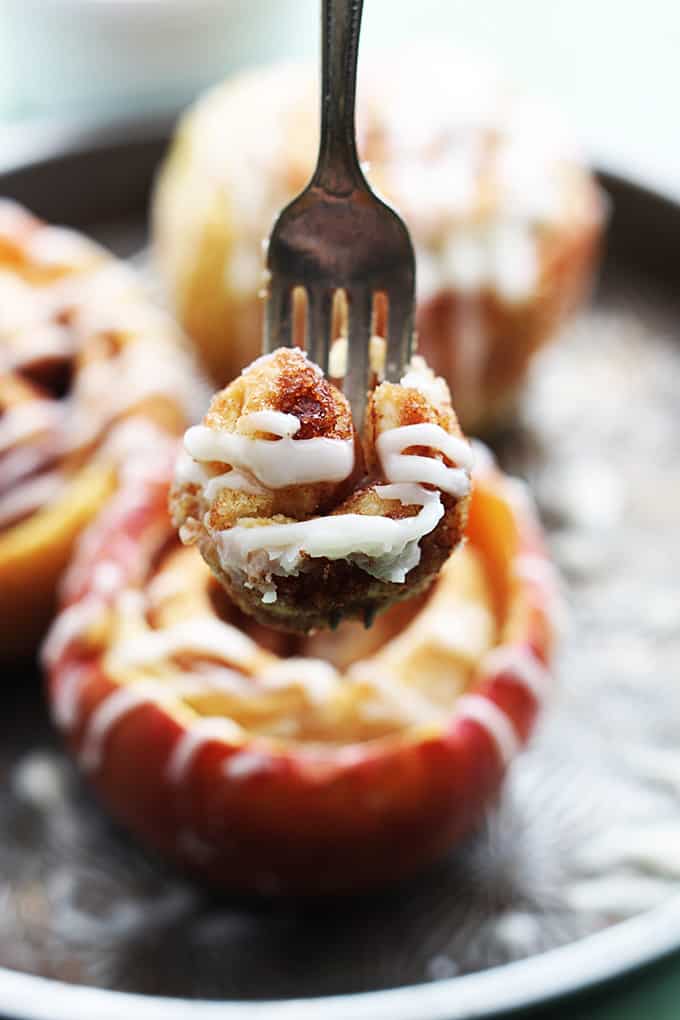 Besides the fact that these are so purrrdy, they really are insanely delicious. The apple juices kind of seep into the cinnamon roll dough while it’s baking – not enough to make it soggy (ewe), but just enough to give the cinnamon roll a hint of sweet apple-y flavor (mmmm). It’s incredible, irresistible, and undeniably wonderful. And the frosting! Can’t forget that stuff, obviously. A rich cream cheese frosting is the perfect topping for these cinnamon rolls. Drizzle it, spread it, dunk it – however you please, just make sure you get plenty of that frosting on every single bite of your cinnamon roll stuffed baked apple. You will not regret it friends. 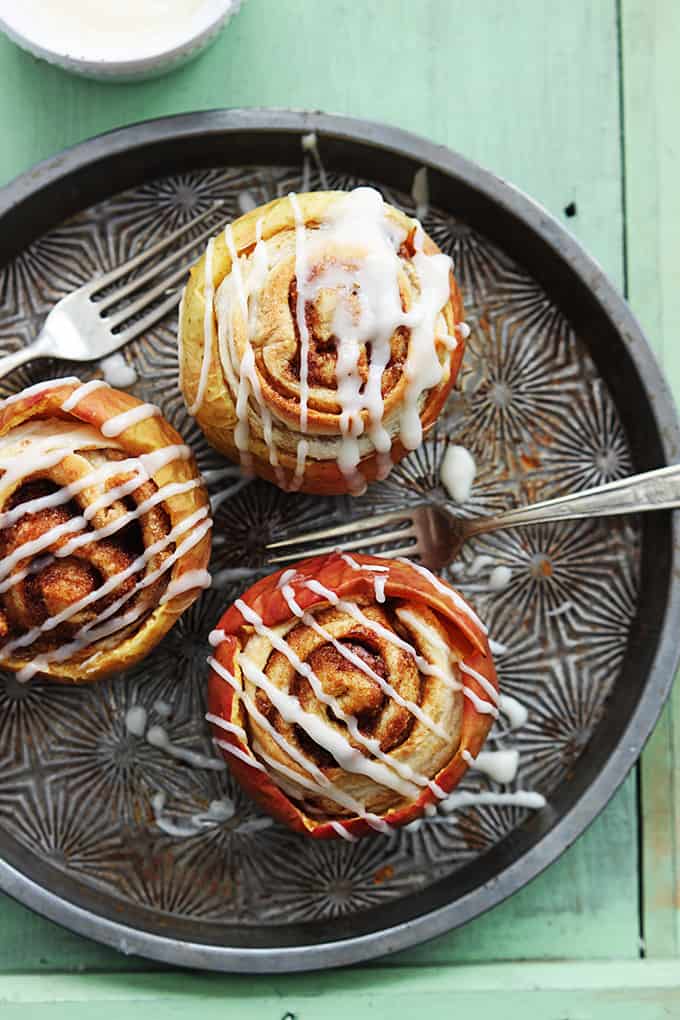 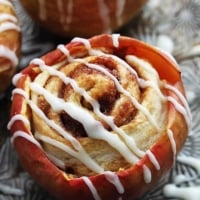 *If you do not have an electric stand mixer with a dough attachment, you can stir the ingredients together, and then knead by hand for 5-7 minutes until dough is smooth. 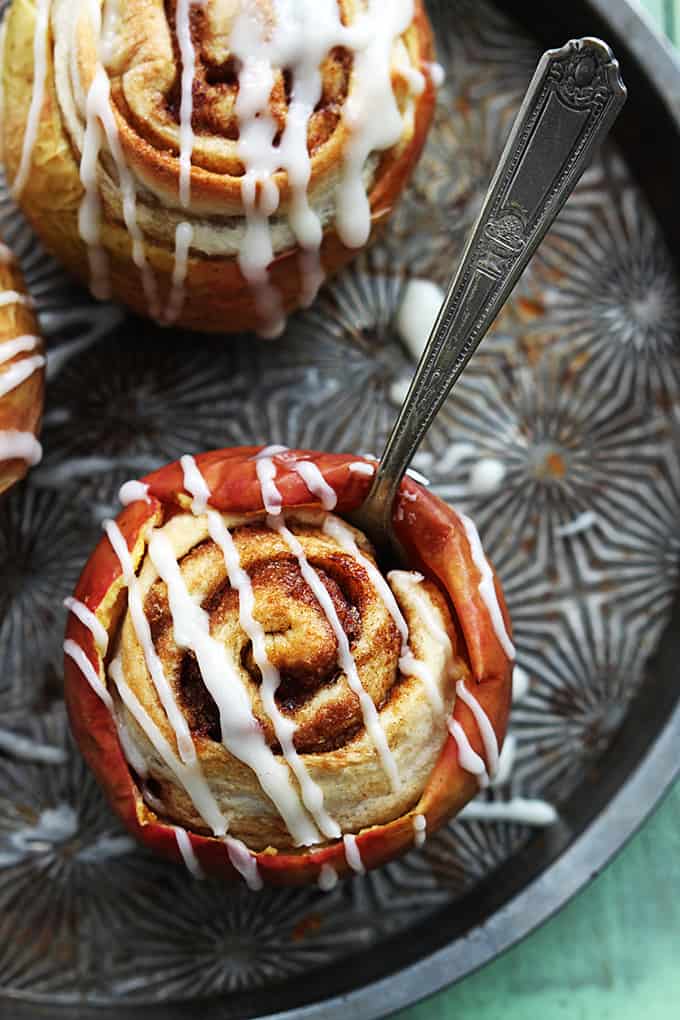 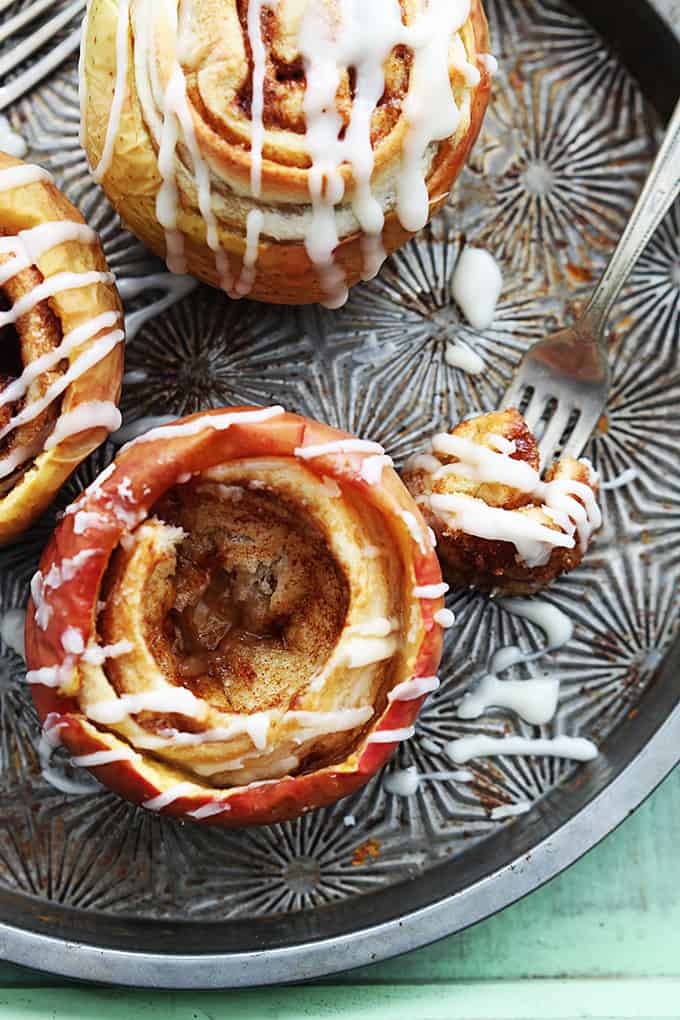