If you’re like me and can’t get enough soup, then you should definitely give this Olive Garden Chicken Gnocchi Soup a try, right before you test out my Instant Pot Pasta e Fagioli Soup and Sausage and White Bean Soup. 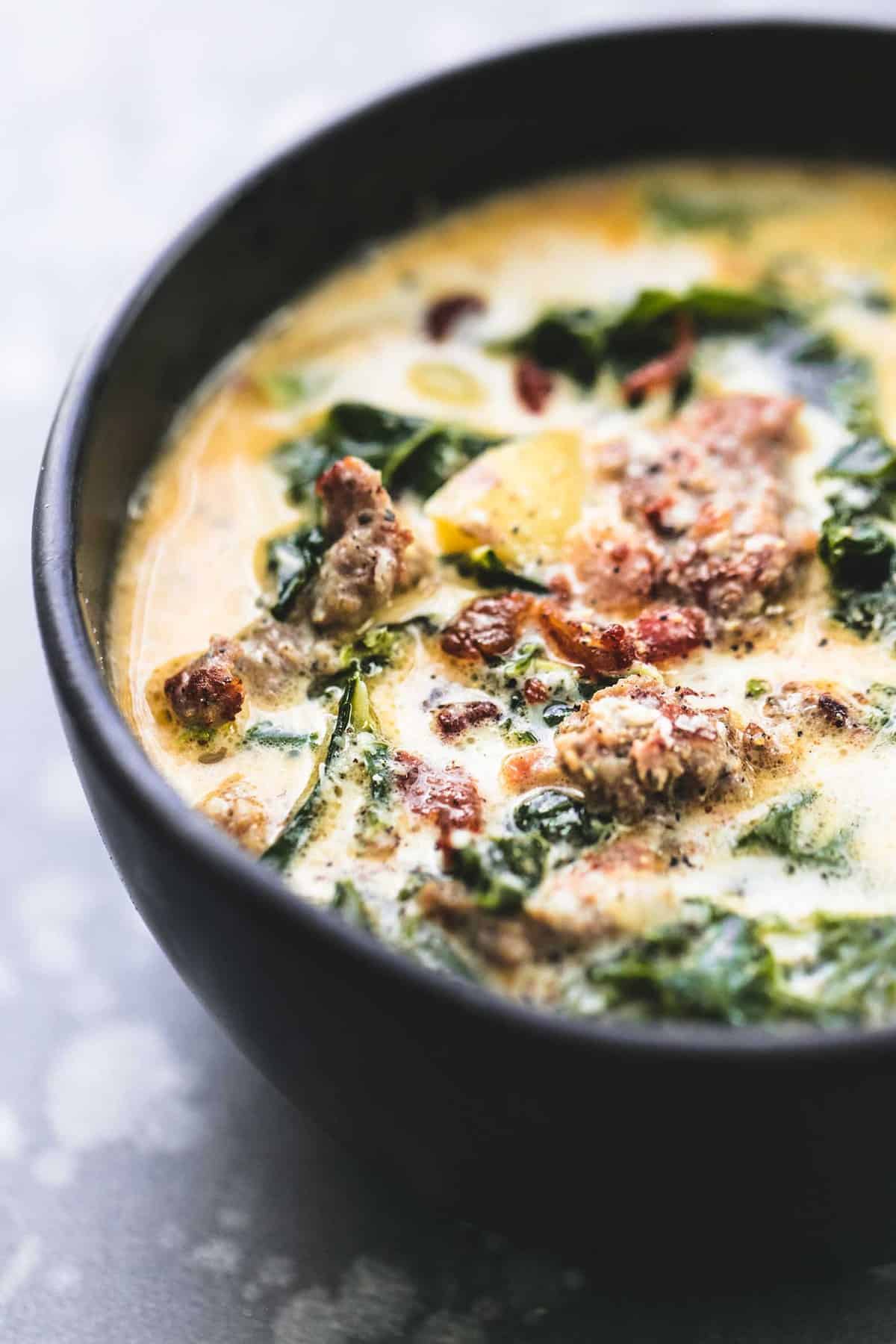 You may have noticed I have a thing for Olive Garden soups. I know I’m not alone! What’s not to love though? There’s a reason they are so popular — they’re so flavorful and delicious. They seem to have some kind of “secret ingredient” that makes you come back again and again for that one-of-a-kind soup you can only get there. Right?

Well, I maybe not. Sure, there’s something to be said for the going-out-to-eat experience overall. And the not cooking thing. But, sometimes you can’t make it to a restaurant or it’s not in your budget, or your baby just barfed all over you and restaurants generally frown on bringing sick kids to restaurants.

However, it’s not completely true that you can’t enjoy a recreation of a restaurant dish in the comfort of home — and probably for about half the cost. Whole websites have been created that are solely devoted to mimicking restaurant meals, after all. So when I set out to create one of my favorites — this Zuppa Toscana Soup — I did it with determination and I did it with you in mind: You, the one who cleans up the puke, who manages the bank account, who works two jobs and just wants a delicious bowl of soup in front of them at the end of the day. And, guys, I think I kinda nailed it. 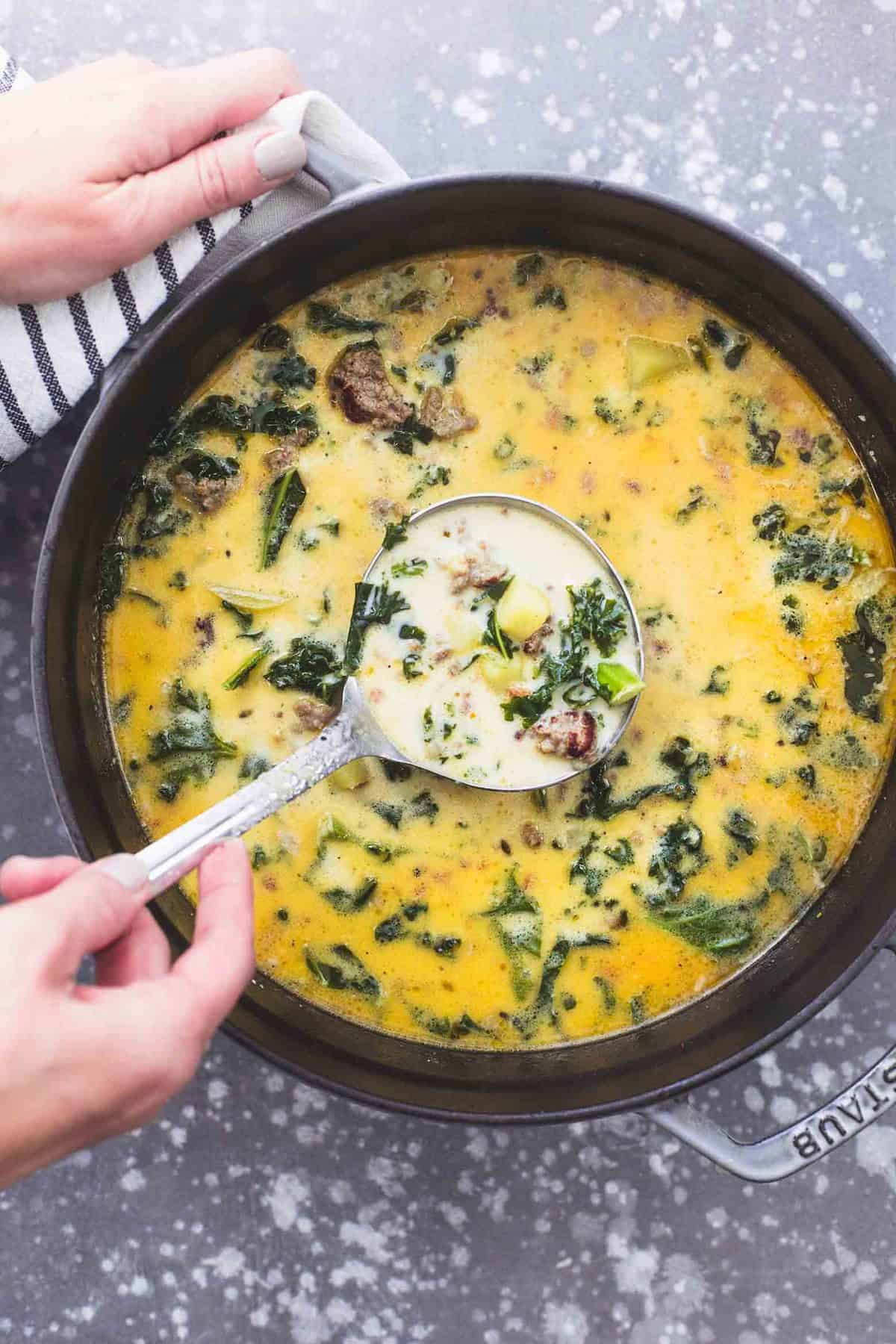 WHAT IS ZUPPA TOSCANA?

So, “zuppa” means soup in Italian. “Toscana” refers to the Tuscany region of Italy. Therefore, “Zuppa Toscana” translates to “Tuscan soup” or “Tuscan-style soup.” Traditionally, this soup is made with lots of veggies, beans, potatoes, olive oil, spices, Italian bacon, and Tuscan bread (it kind of reminds me of a minestrone). 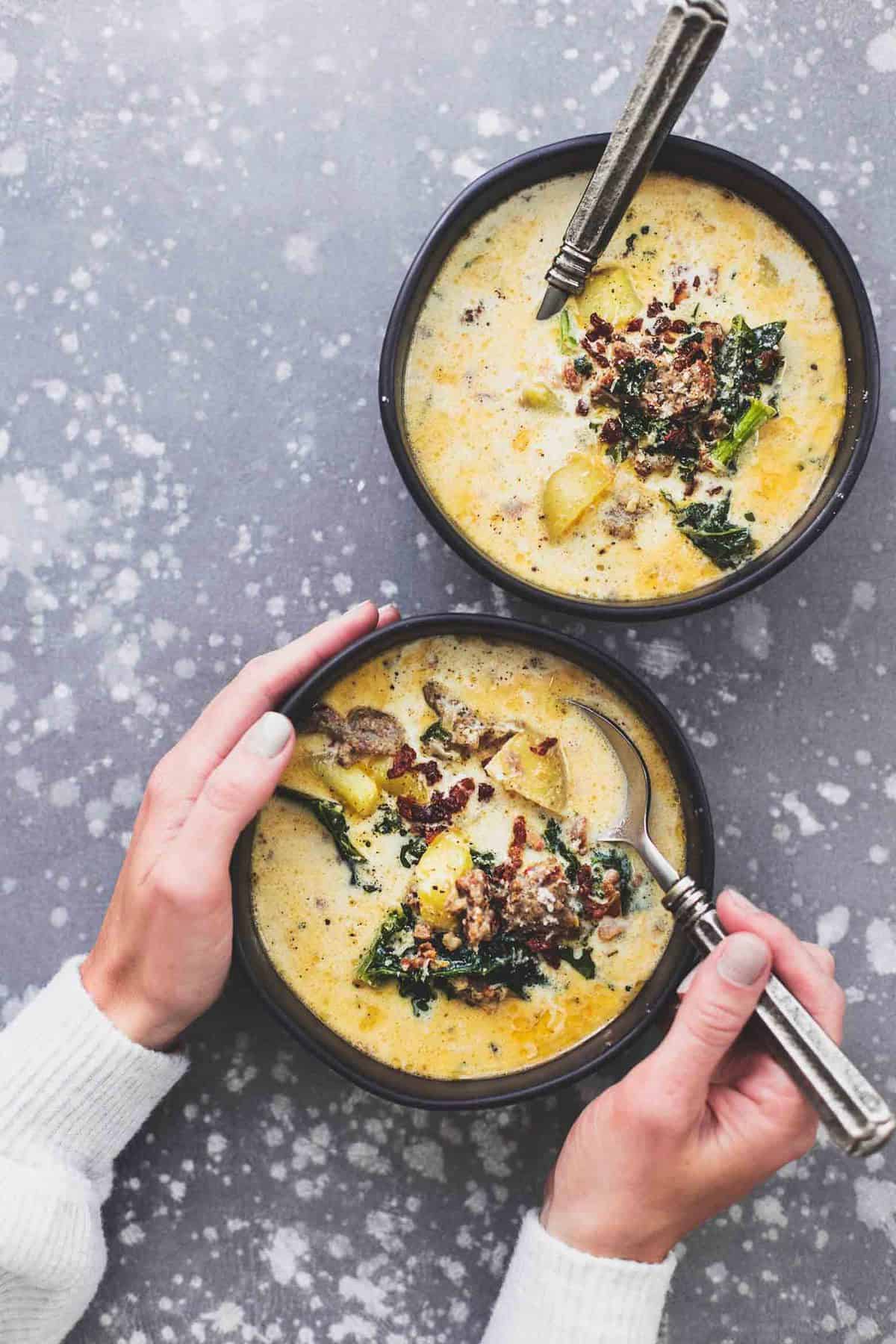 For starters, Zuppa Toscana doesn’t have any grains or glutens in it, which is a plus if you are gluten free. It also contains a hearty helping of kale and potatoes, onions and garlic, all of which provide essential vitamins and minerals that your body needs every day. And chicken broth is good for your hair, skin, and nails and your immune system.

I admit though, that the sausage, butter, and heavy cream are not so great for you. They do provide protein and calcium, but also a lot of saturated fat. You could work around this by substituting a leaner Italian meat sausage, like chicken or turkey. You can also halve the butter and use fat free half-and-half or a plant-based cream or milk (like coconut), though this soup won’t be as thick and rich if you choose to do so, but it will still be yummy.

CAN YOU FREEZE ZUPPA TOSCANA?

Yes, you can freeze this soup if you have any leftovers, but I would eat it within two to three weeks. The kale will be browning and the potatoes might be a little off-color, but it will taste just fine. I wouldn’t leave it in the freezer for too long though, because when it warms up, the potatoes will be mushy and I just feel like this soup is meant to be enjoyed pretty close to the time you made it. 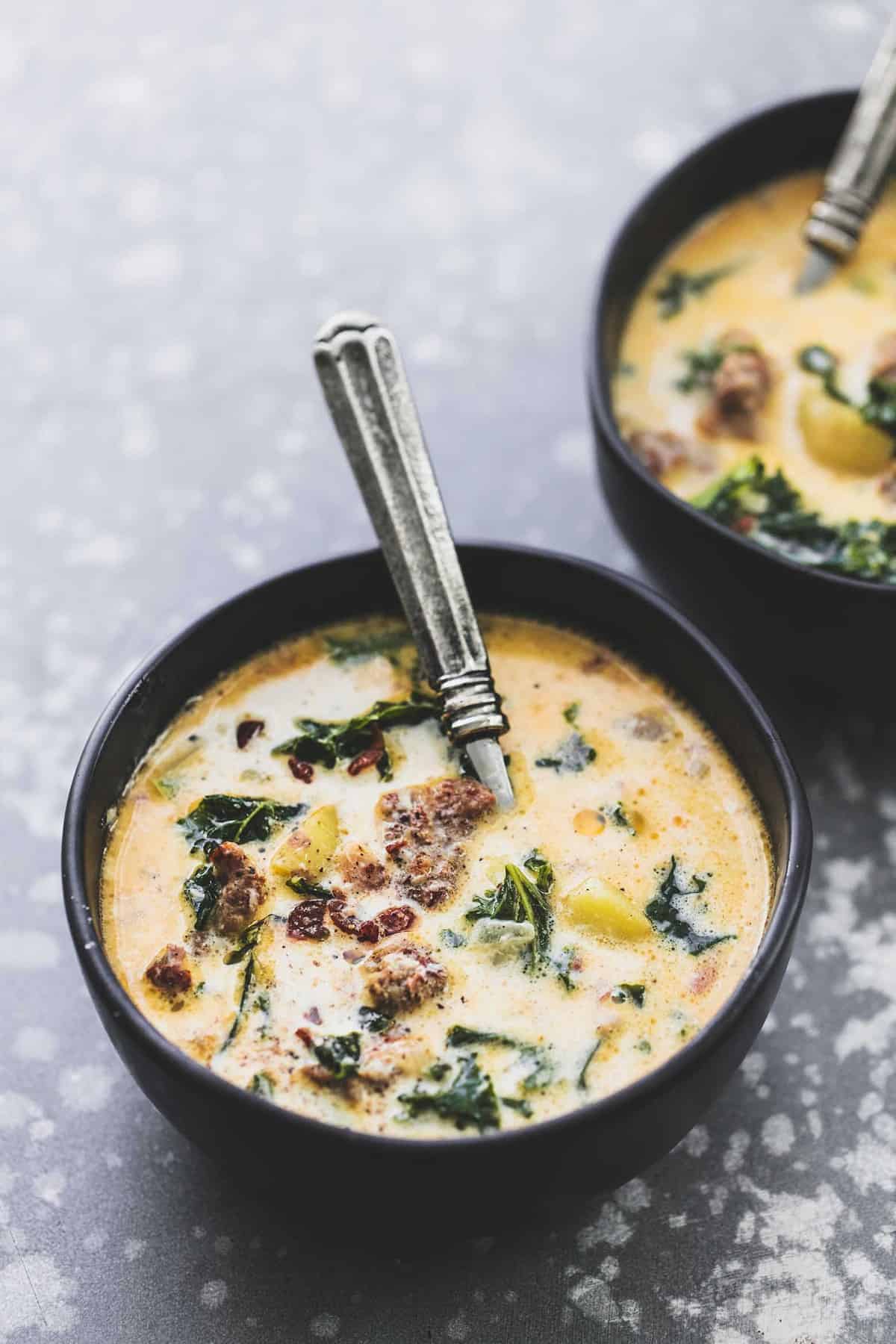 WHAT SIDE DISHES CAN YOU SERVE WITH ZUPPA TOSCANA?

To me, this soup is a meal in and of itself. However, it also goes great with the following sides:

“I have made this soup many times and it’s always a winner. Better homemade & a lot less expensive than ordering it at Olive Garden” – Lucile

“Just made it for the second time. I love it and My extended family LOVES it too. this time I made almost double the recipe because they are sure to ask for bowls to go. I added brown sugar bacon and the whole bunch of kale.” – Norma

“This is an awesome recipe. So delicious! I cut some of the fat by using half n half vs the full cream. I also use mild & hot sausages as my hubby doesn’t like too hot. Thanks for this posting!” – Christine 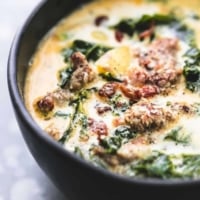 Course: Main Course, Soup
Cuisine: Italian
Author: Tiffany
Did You Make This Recipe?Tag @cremedelacrumb1 on Instagram and hashtag it #cremedelacrumb!