Pumpkin French Toast is a restaurant-quality breakfast dish made with pumpkin pie spice, cinnamon, brown sugar, milk, vanilla, eggs, and more for a seasonal, kid-friendly dish that’s out of this world! 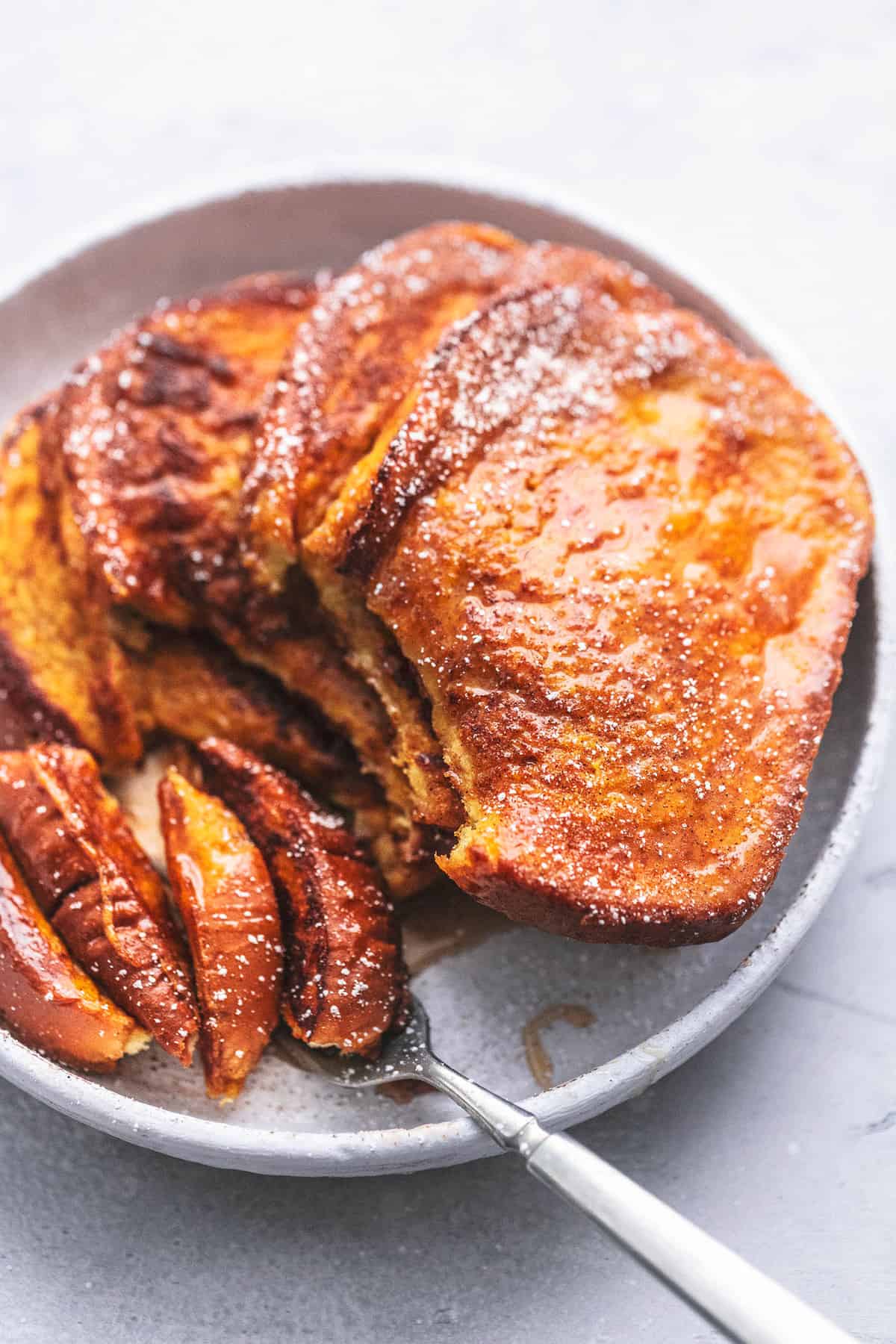 Are you ready for the best French toast story of your entire life? (I think no one in the history of…well, ever has uttered that sentence before.)

Picture this: Little, 5-year-old Tiffany, sitting at the kitchen table, throwing a hissy fit because she was being forced to eat plain, old, ordinary French toast for breakfast. This is the morning after Thanksgiving and Tiffany had just gorged herself the whole week before on pumpkin everything and wasn’t yet satiated. This was before pumpkin drinks, pumpkin muffins, pumpkin flavored everything. Needless to say, she was way ahead of her time.

Anyway, so little Tiffany was less than pleased with the boring French toast she was being served. There was nothing special about it (unlike these French toast recipes) and she was clamoring for another slice of pumpkin pie or anything at all that was pumpkin flavored instead of what was put in front of her. 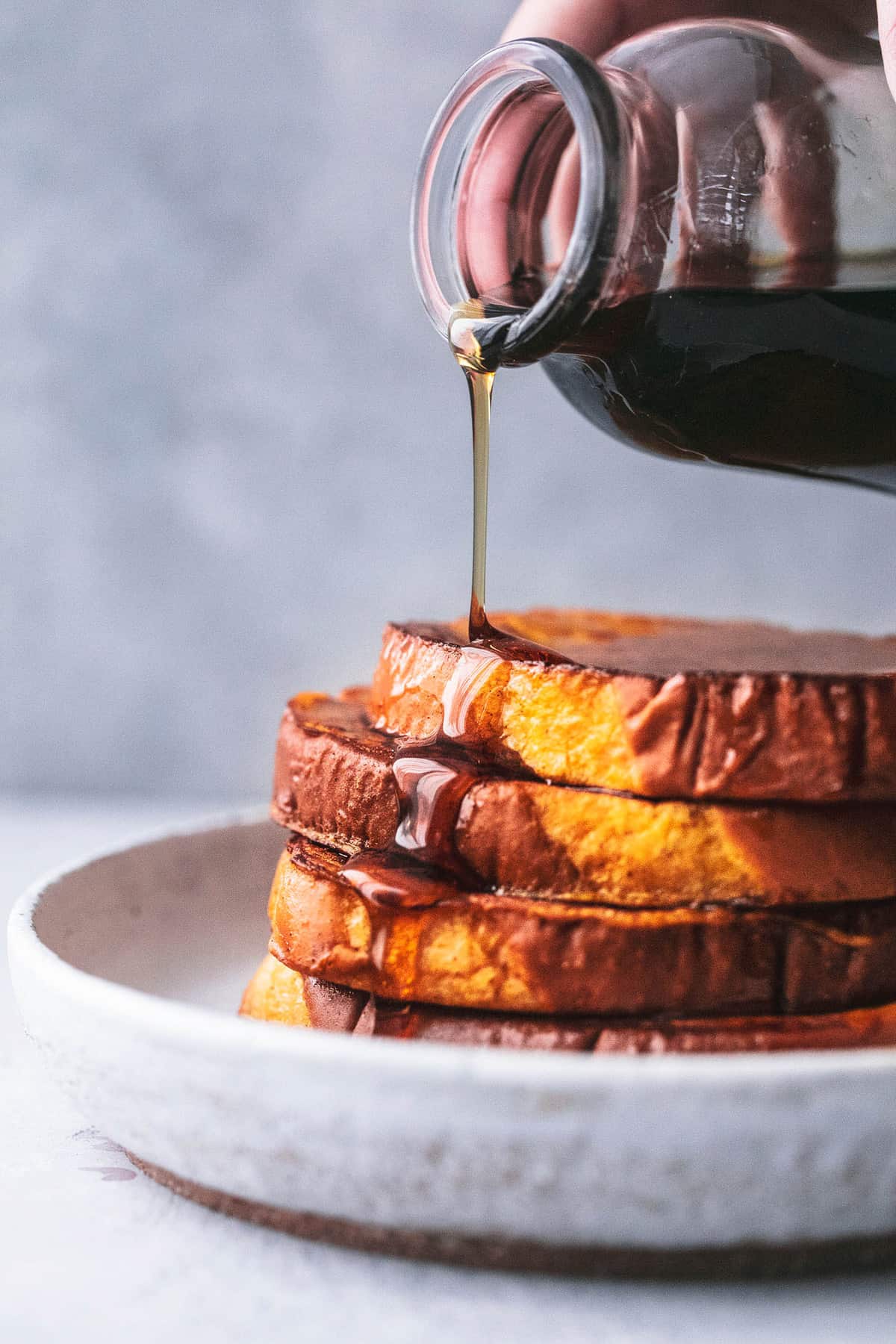 Finally, because her mom is a wonderful human being, she was served French toast with leftover pie filling stuck in between two pieces of toast like some kind of yummy Frankensandwich. Her siblings all complained because she was getting special treatment. In true form, she stuck her tongue out and wolfed down her pumpkin French toast so no one else could have any.

And that, my friends, is how I came to love the flavors of pumpkin for breakfast as well as lunch, dinner, snacks, and desserts. Except, over the years I was able to come up with something more elegant than basically pumpkin pie sandwiched between two pieces of French toast, you know, for more of a restaurant-quality French toast version. 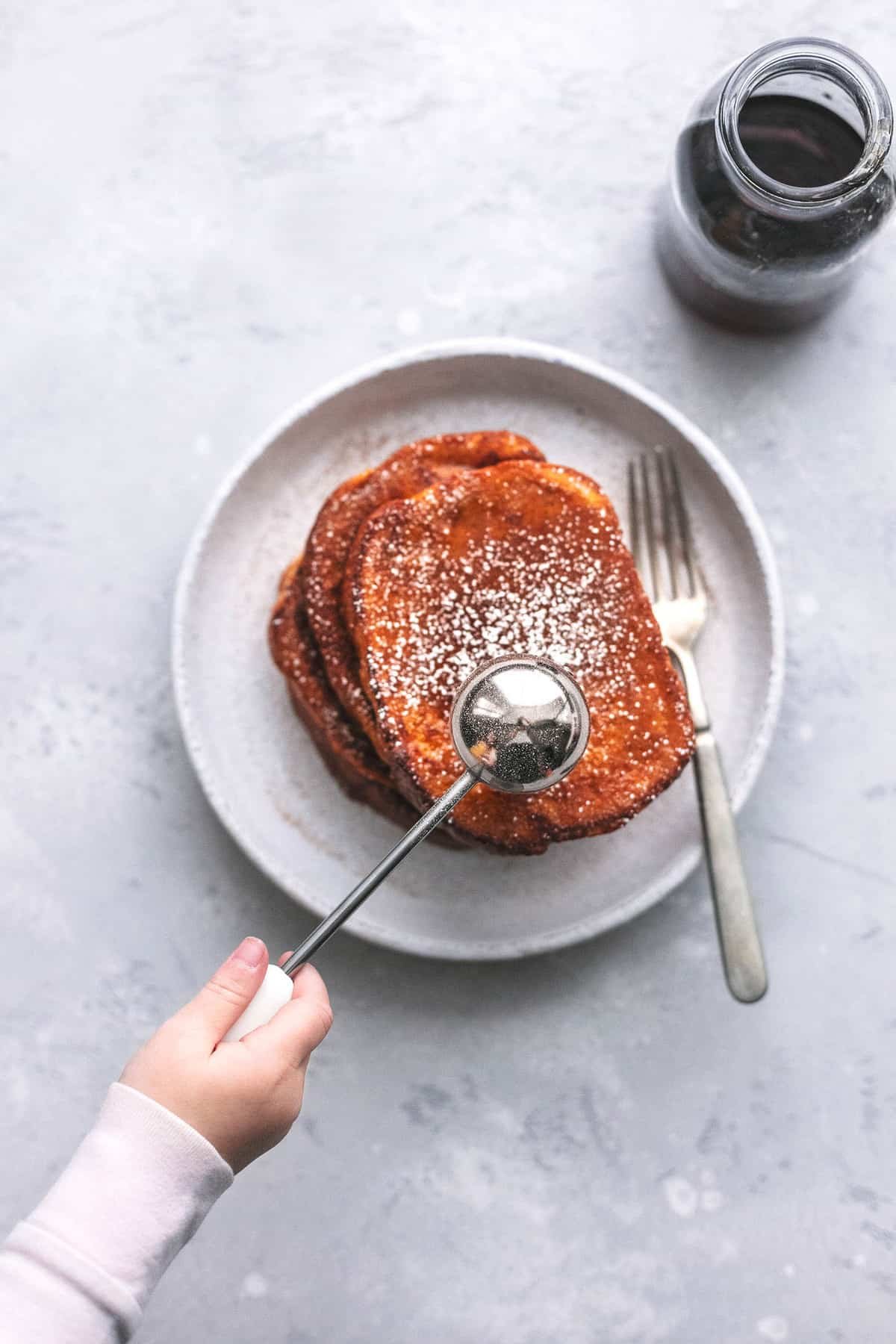 Why is it Called French Toast?

Like lots of things, we aren’t too clear on reasons why this dish is called French toast. Did it originate in France? Some research I did suggests that lots of cultures were making versions of this dish all around the same time so who knows.

I do know why it was popular though: It was simply a good way to use up stale bread the next morning. No one wanted to eat plain, stale bread, so they dipped it in eggs and spices and grilled it up into a tasty treat.

The French actually called this dish “pain perdu” which means “lost bread.” I guess people didn’t want to call it either the French words or “lost bread” because neither really made any sense? So therefore it seemed easier to just say “French toast.” That’s what I’m going with anyway. 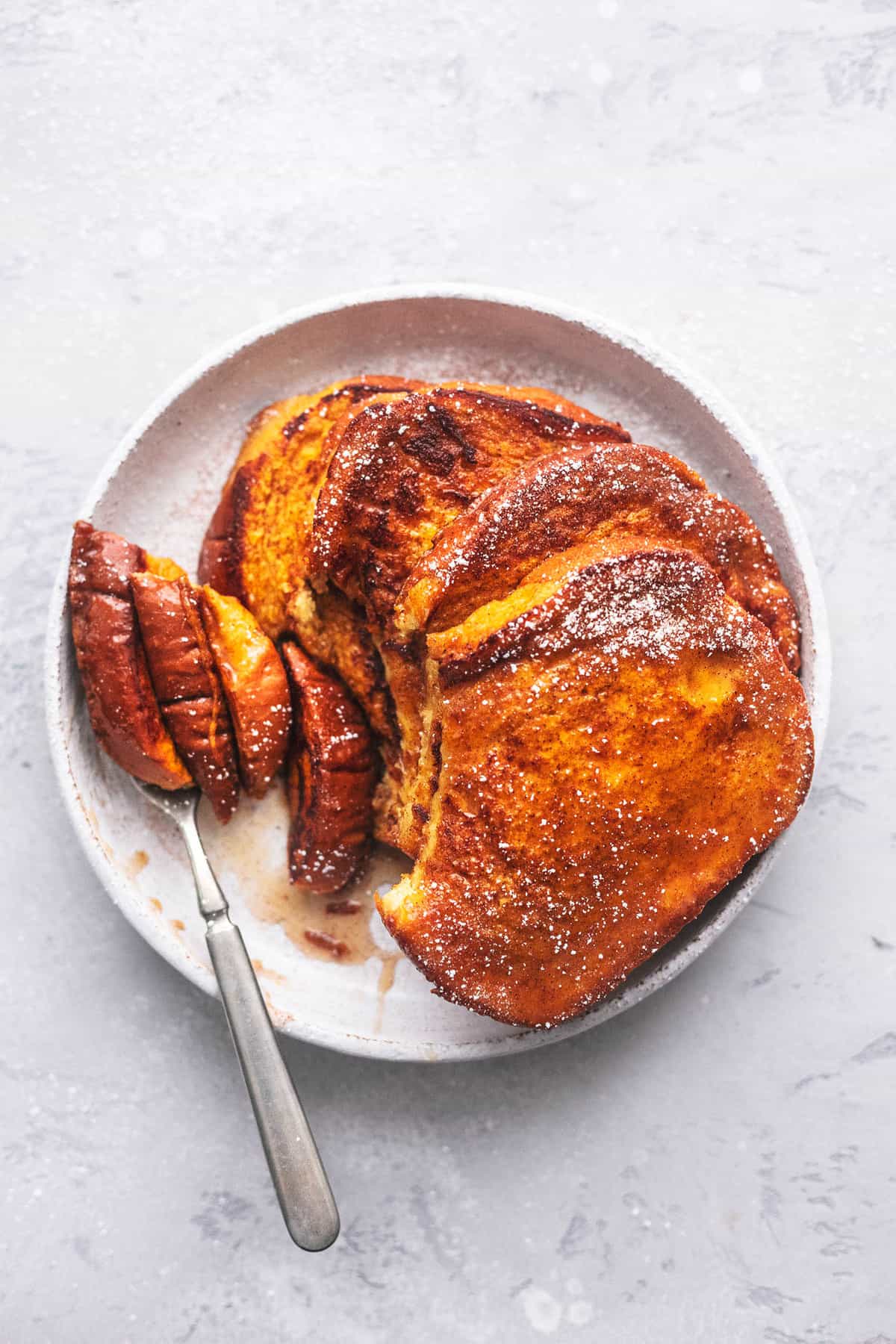 What Kind of Bread Works Best for French Toast?

Although you can use any bread you like for French toast, these are some of my favorites: 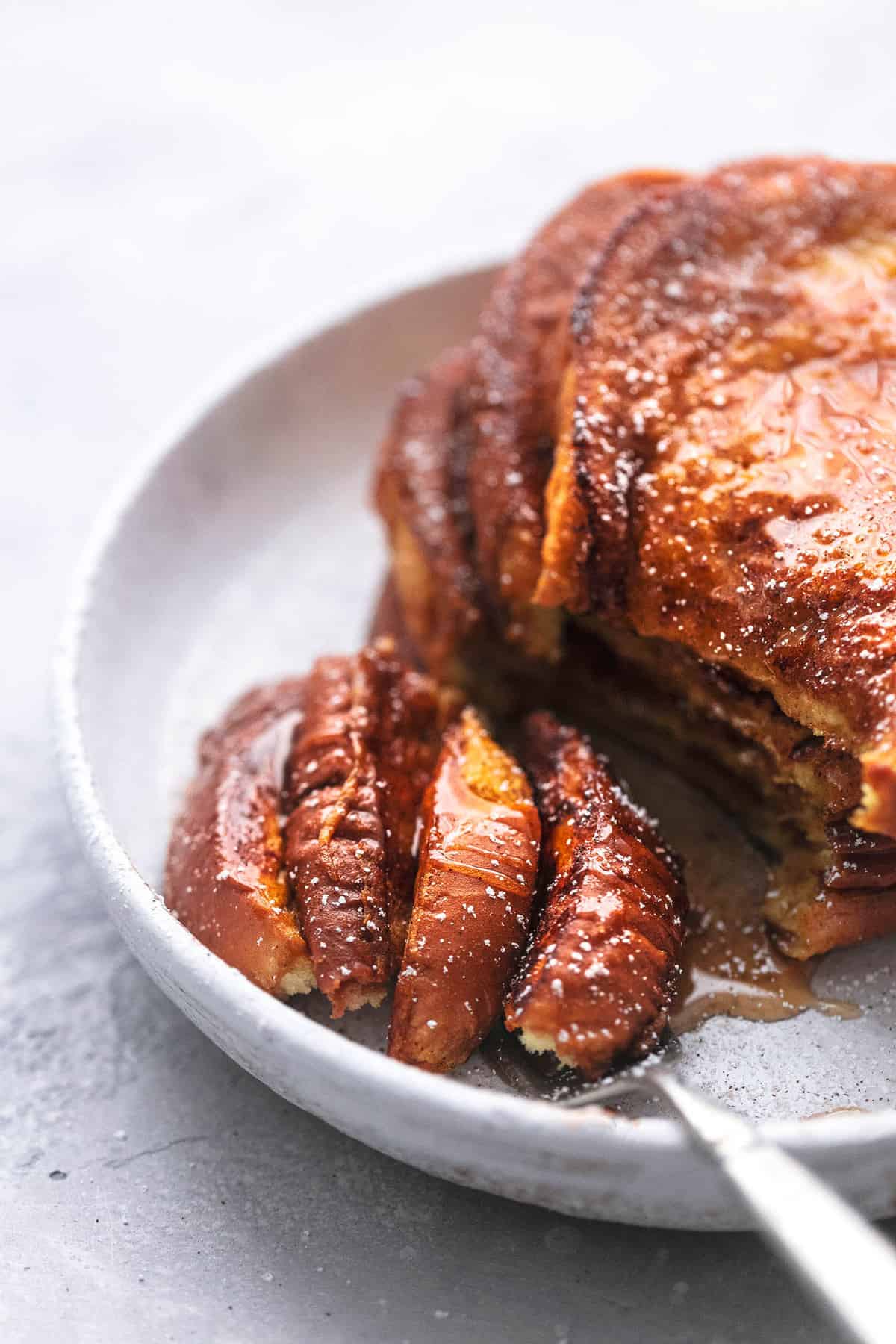 How do You Make French Toast Sticks?

French toast sticks are a fun way to serve French toast, especially for kids. I simply make the toast as directed below and then slice each piece of toast up into four “sticks” and serve. It’s especially fun to dip in syrup or jelly as well!

Why is My French Toast Soggy?

You might think more milk or sugar is a good thing. But adding more dairy or sugar will make your toast harder to cook and leave your bread too soggy to eat.

Ideally, your cooked French toast will feel dry to the touch on the top after you take it off the griddle. The edges should feel crispy. Add more sugar to your French toast at the end, in the form of a sweet dip or by dusting with powdered sugar, if desired. 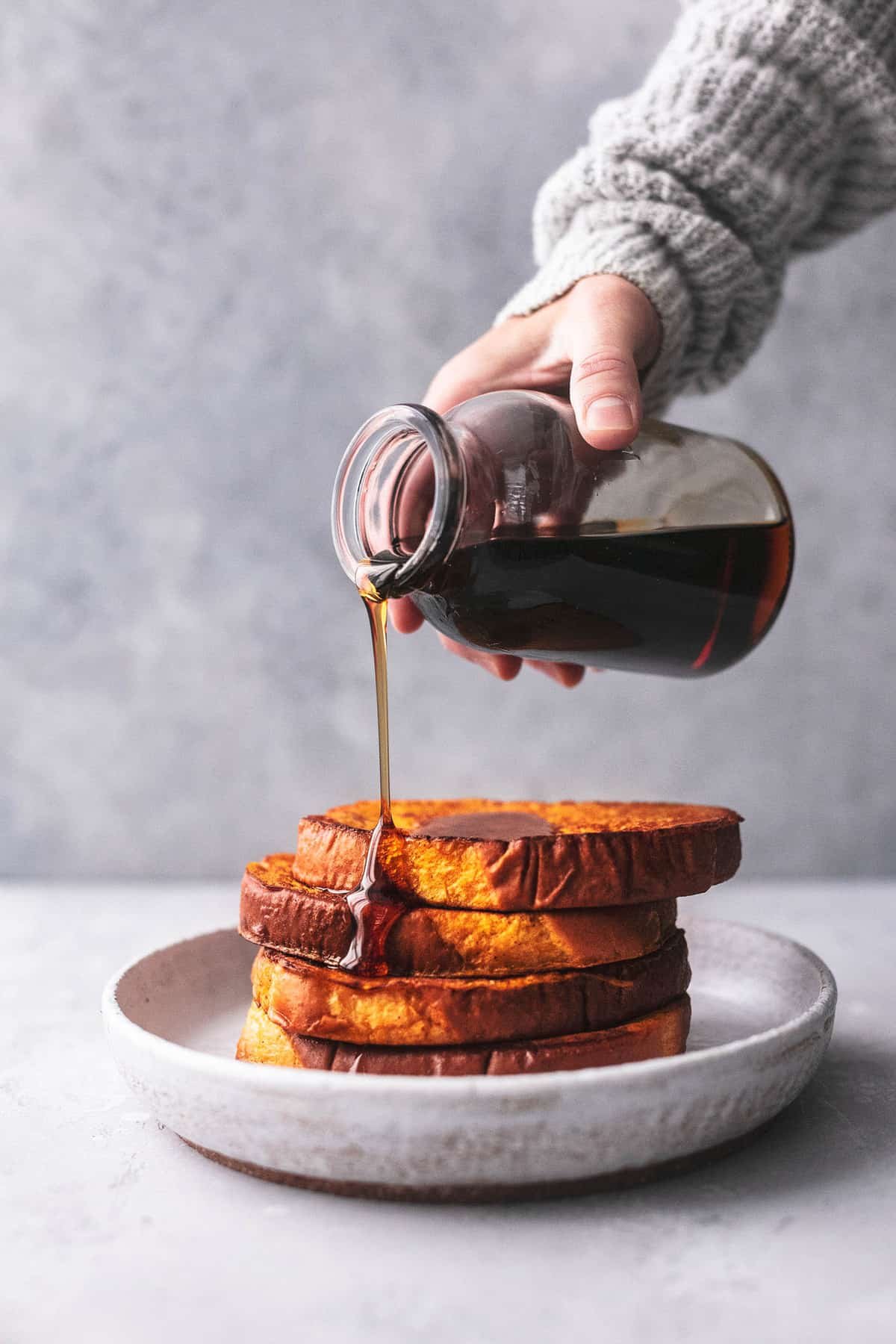 Did you make this recipe?? Please give it a rating below! 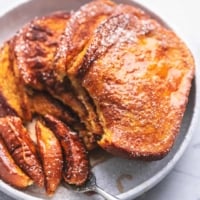 Makes about 8 pieces of french toast. My husband and I usually eat two each, and the kids eat one each, so it can feed 4-6 people depending on their appetites.