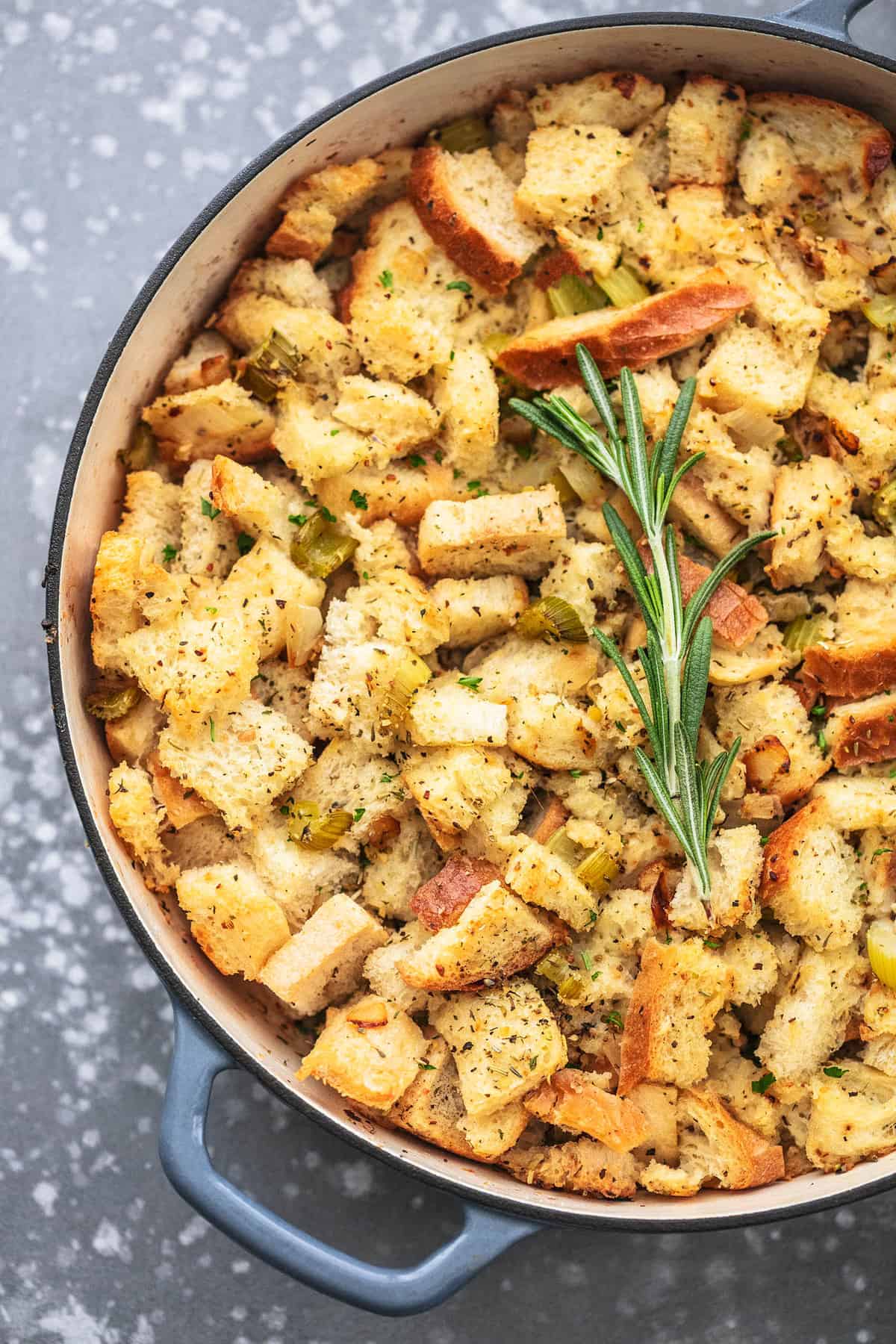 Thanksgiving is a mere few weeks away and I cannot contain my excitement! Sure, I miss the summer as much as the next person…the warm weather, the cookouts, the pool, the sandals…but after summer I’ll take the next best thing: the holidays! Give me all the turkey, the cranberry sauce, the mashed potatoes, the desserts, and OF COURSE the stuffing. What Thanksgiving is complete without traditional homemade stuffing?

My mom used to save all the ends of sandwich bread in the freezer for a couple months ahead of Thanksgiving and use those as the stuffing’s stale bread. I have to admit, it is a pretty genius idea. Plus, she saved any kind of bread ends, so you’d have mostly white, some wheat, maybe rye, sourdough, multigrain — you get the idea.

While I have made stuffing like that before many times, I do have to say my preference is for a uniform bread taste, and in particular sourdough bread. It just gives a traditional stuffing recipe a little something extra, a tiny tang undertone that I just love so much. If you love sourdough (and Thanksgiving) as much as I do then I think you’ll agree, this easy stuffing recipe is a keeper. (White bread works just as well too if you prefer it!) 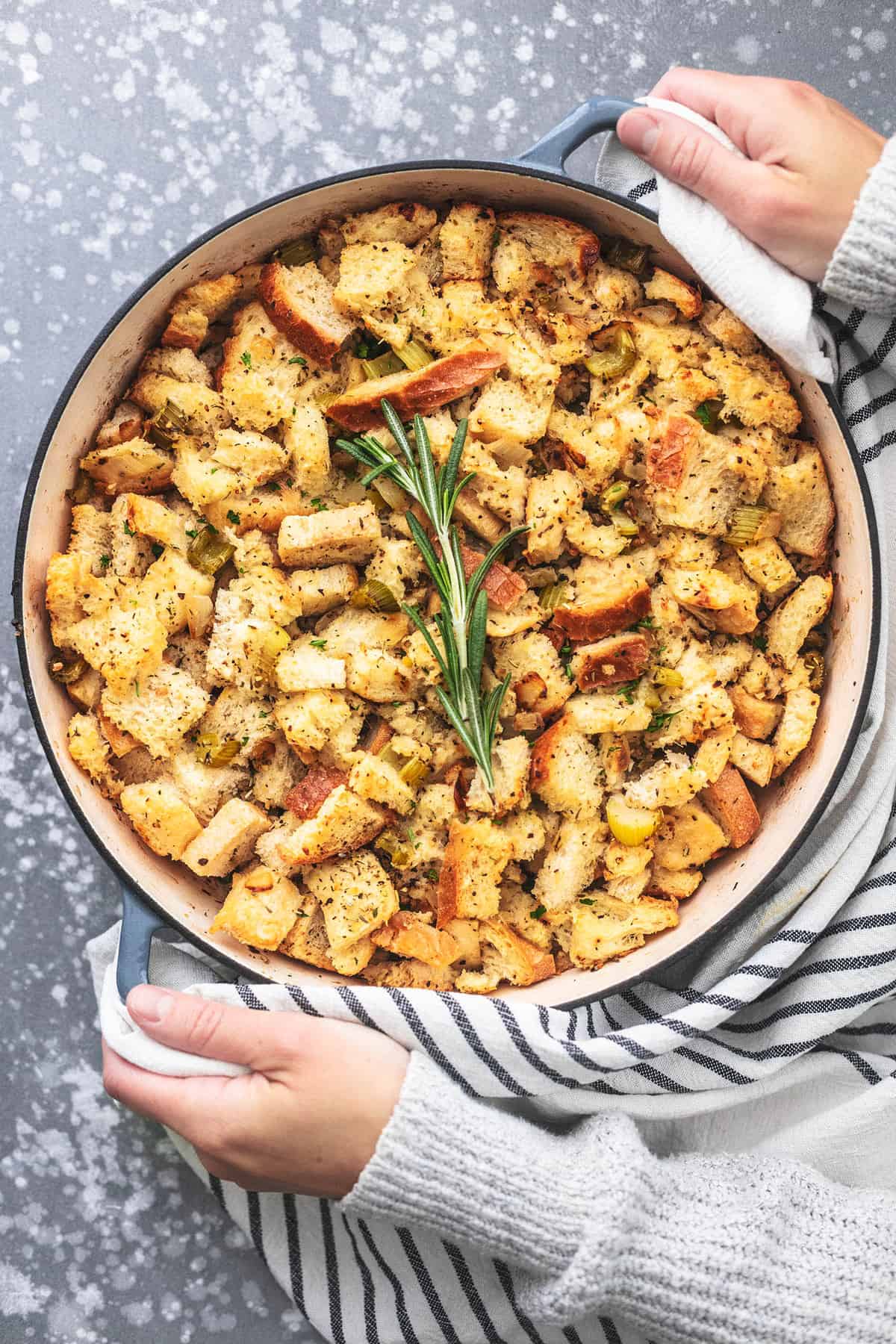 HOW DO YOU MAKE CLASSIC TRADITIONAL HOMEMADE STUFFING?

The first thing I do when making this dish is to cut up my sourdough (or white) bread into cubes and let them sit out on the counter for an hour to get good and stale and develop a bit of a crust.

Next, I put the bread cubes in a single layer on a large, rimmed baking sheet. I put them in the oven before preheating and then turn the oven on to 350 degrees. When the oven beeps that we are at temperature, then I pull the bread out and put it in a large bowl.

In a large skillet, I melt the butter over a medium-high heat, adding to it the celery and onions and cooking them down before putting the garlic into the skillet and cook until it’s fragrant.

Take the whole bread mixture and put it back into the oven-safe skillet or a 9×13 baking pan that is oven safe if you don’t have a skillet. Cover the skillet or baking pan with foil and place in the oven for 40 minutes. Take off the foil at this point and then bake it again for another 30 minutes or until the top is a nice golden brown.

Serve right away or let it cool and put it in the fridge for up to five days. I recommend a reheat in the oven before serving. 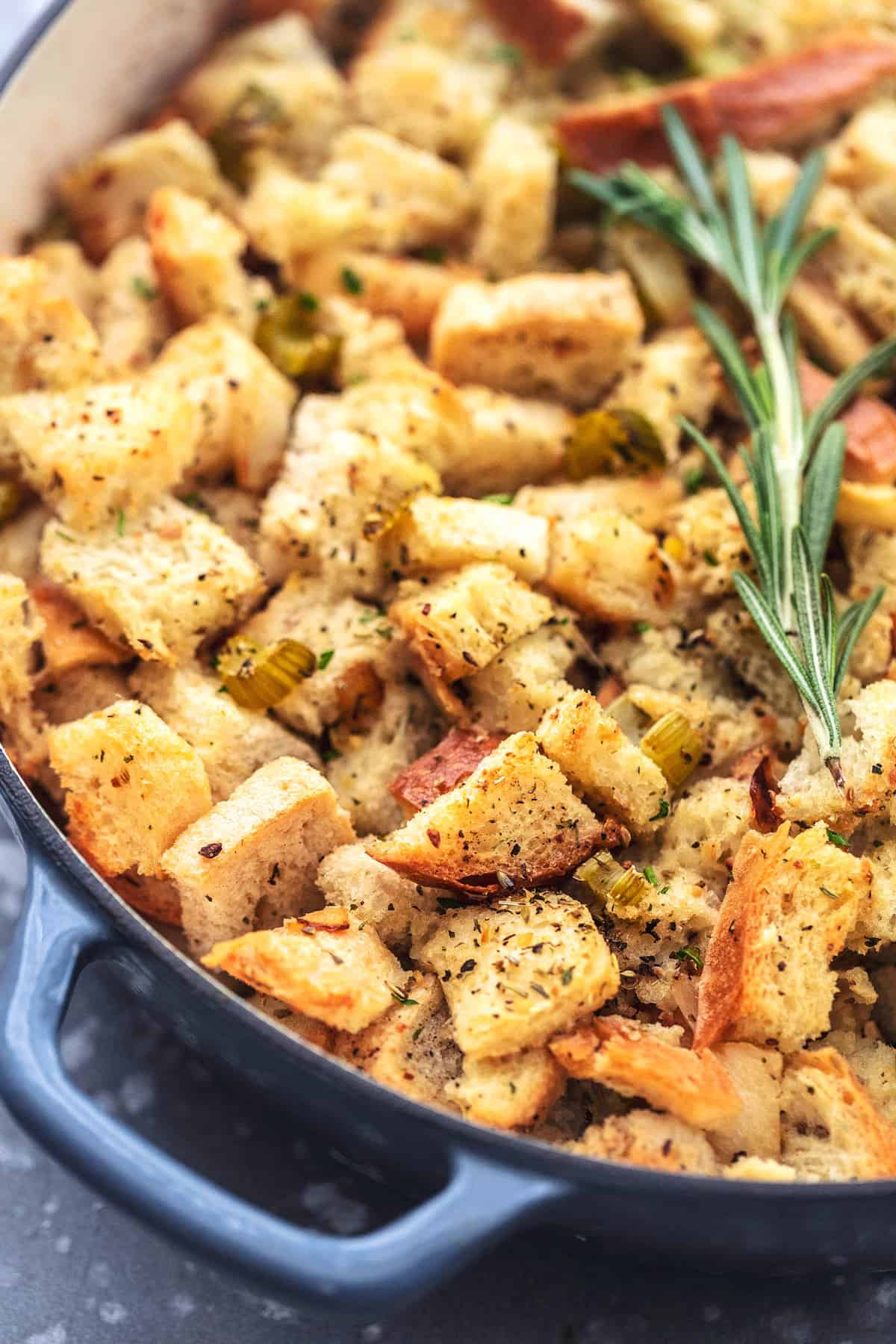 HOW DO I ADD SAUSAGE TO TRADITIONAL STUFFING?

You’ll see a lot of stuffing recipes that include sausage. If you prefer to make your stuffing this way, it’s easy to add the sausage.

I suggest pre-cooking Italian sausage before starting the rest of the recipe. If you bought it in link form, take it out of the casings and cook it until it’s done all the way through. Add the sausage to the bread cubes with celery mixture during step 3.

You’ll only need about half a pound of sausage for this recipe, which is about a link or two, depending on their size. Traditional pork or beef Italian sausage is tasty but fresh Italian chicken sausage is delicious as well.

WHAT CAN I USE IF I DON’T HAVE ITALIAN SEASONING?

No Italian seasoning? No problem! Making your own is a cinch.

Combine together 1 teaspoon each of:

Add this mixture when the recipe calls for an Italian seasoning blend. 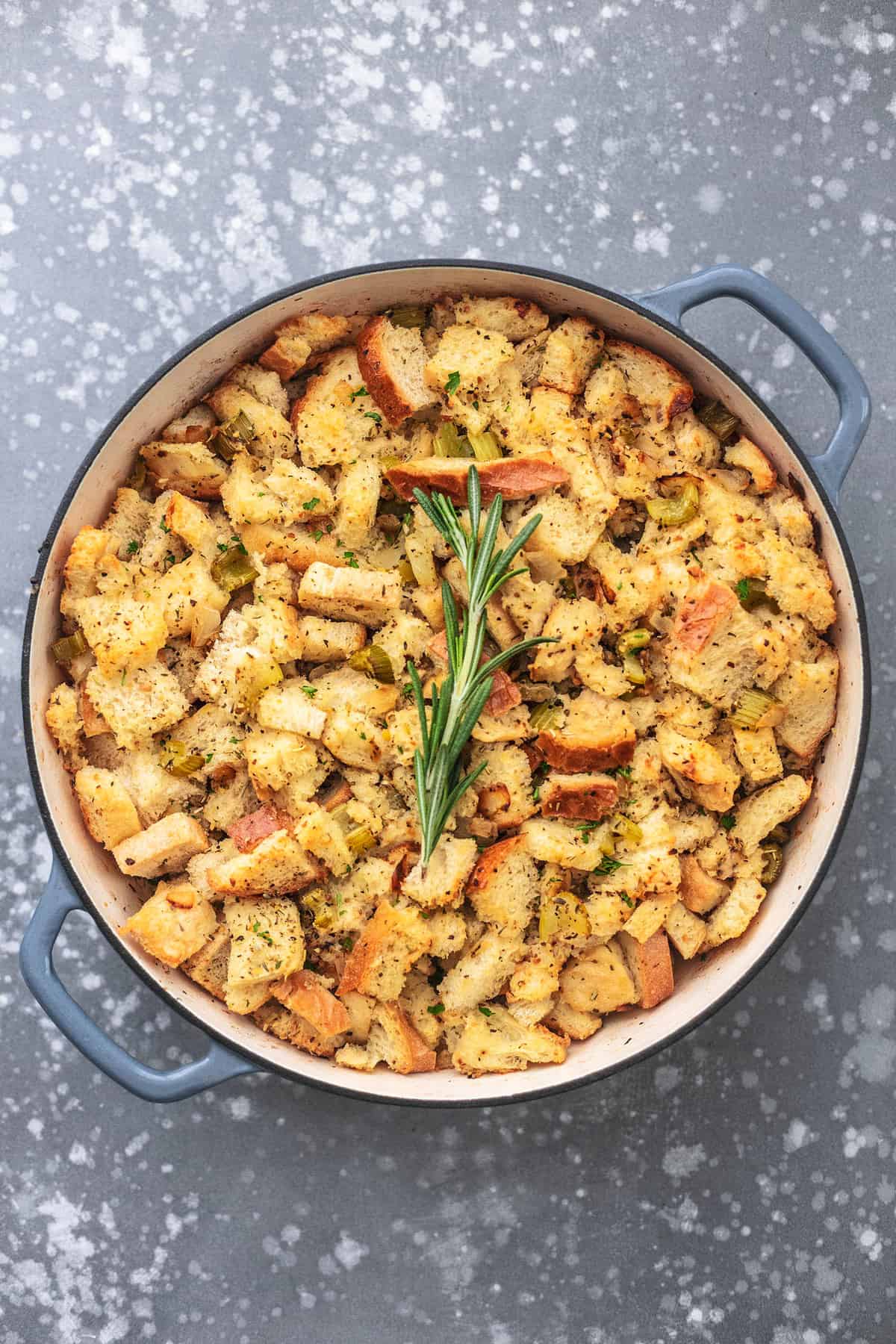 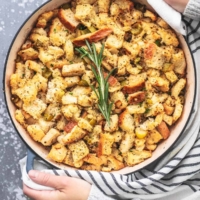 *This recipe can easily be doubled, just bake it in a 9x13 inch pan or on an extra large baking sheet.  *Italian blend seasoning can be subbed with 1 teaspoon each: dried thyme, dried rosemary, and dried parsley