These Spicy Korean BBQ Chicken Wings will change the way you think about chicken wings forever. Savory, spicy, sweet, and sooooo scrumptious, if you’re looking for a way to kick your appetizer game up a notch, look no further!

If you love finger foods as much as I do, then you should also try these recipes for Easy Lemon Garlic Butter Shrimp, Cream Cheese Chicken Taquitos, Baked Potato Wedges, and these Cheddar Jalapeno Pretzel Bites.

Is there anything not to love about appetizers? I will argue that there isn’t. Easy to make, easy to take to parties, easy for kids and adults alike to hold onto and eat (or drink), and so delicious…if I had my way I’d eat nothing but appetizers and desserts for the rest of my life. True story.

As a finger foods kinda gal, you’d better believe I’ve eaten and made my fair share of chicken wings. Hot, sweet, saucy, dry, I like them all. But sometimes I like to mix it up. I was inspired to try to make these Spicy Korean BBQ Chicken Wings after seeing a similar recipe for Korean BBQ fried chicken in a magazine at the pediatrician’s office. (Inspiration is everywhere, I’m telling ya!)

I tend to like to bake my chicken, and I didn’t really want to deal with the mess of fried chicken wings and I personally think they taste better baked anyway. And it turns out, I was so right, and now I’m going to make all the Korean BBQ everything forever.

WHAT IS THE DIFFERENCE BETWEEN A CHICKEN WING AND A BUFFALO WING?


Chicken wings are, well, the wings of a chicken. They can be cooked any which way and coated in any number of sauces.

Buffalo wings are chicken wings too, but they are a specific recipe that originated in Buffalo, New York. They are straight-up fried naked, no breading, no nothing, and then coated in a sauce that’s buttery and spicy and very messy.

Other restaurants have opted the Buffalo wing as their own in restaurants across the United States since, of course. But they are all a riff off the original Buffalo wing created in that specific town.

I’ve been asked this a lot, and frankly, it kind of makes me giggle a little bit. The short answer is no, they are not wings from baby chickens. Adult chickens just don’t have very big wings, which is probably why they don’t fly. 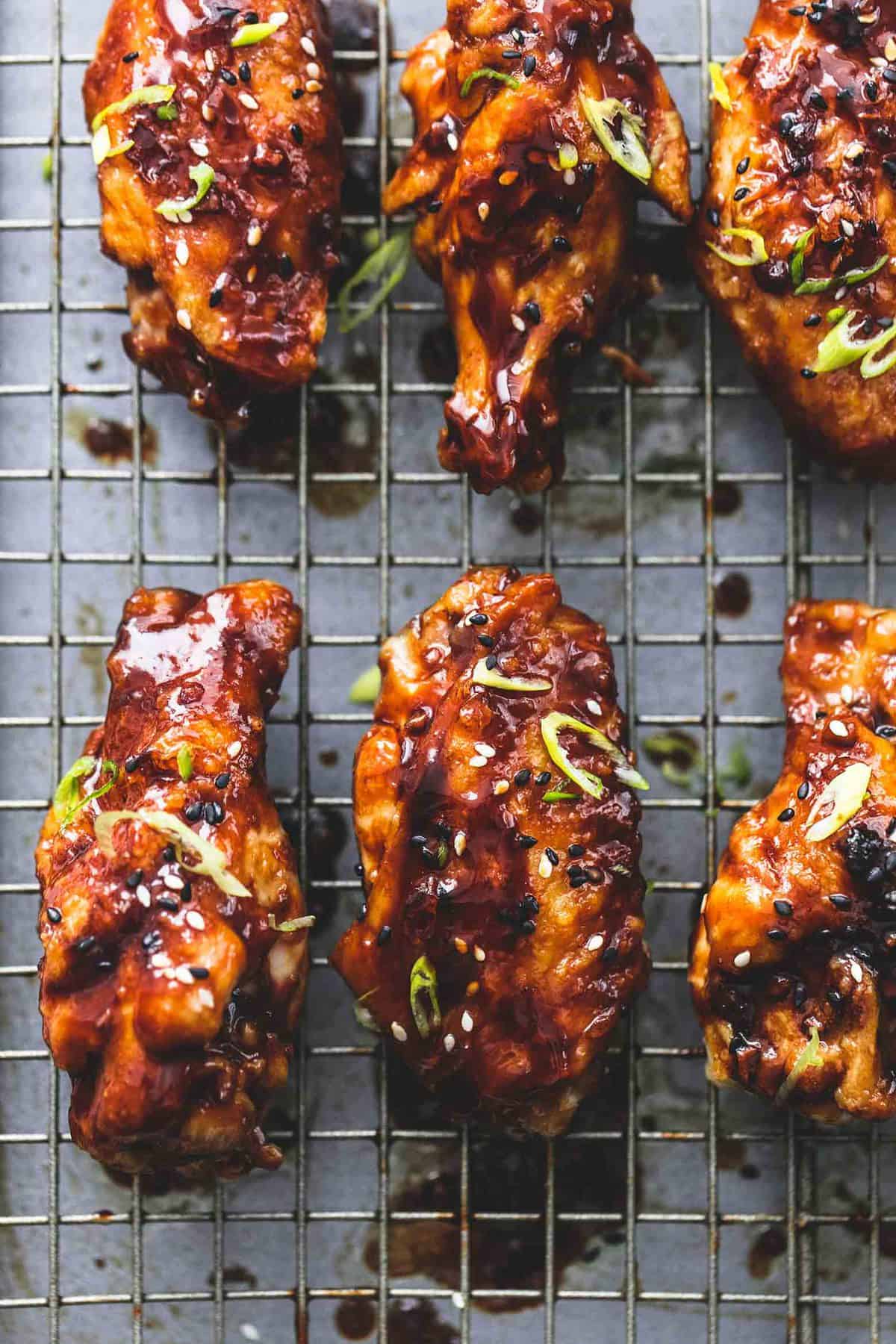 WHAT IS KOREAN BBQ?

Korean BBQ refers to a Korean cooking method that typically involves grilling meat over a grill, which can be outside, centrally located at the restaurant (and visible to customers), or sometimes even table-side.

As most ethnic cuisines go, Korean BBQ has become kind of a cover-all term for more the flavors of the actual barbecue (that sweet and savory flavor that comes from combining ingredients such as sugar, sesame oil, sugar, vinegar, Asian hot sauce, and garlic) rather than the actual cooking method of barbecuing. Although, it would be perfectly a-okay to grill these wings as well! 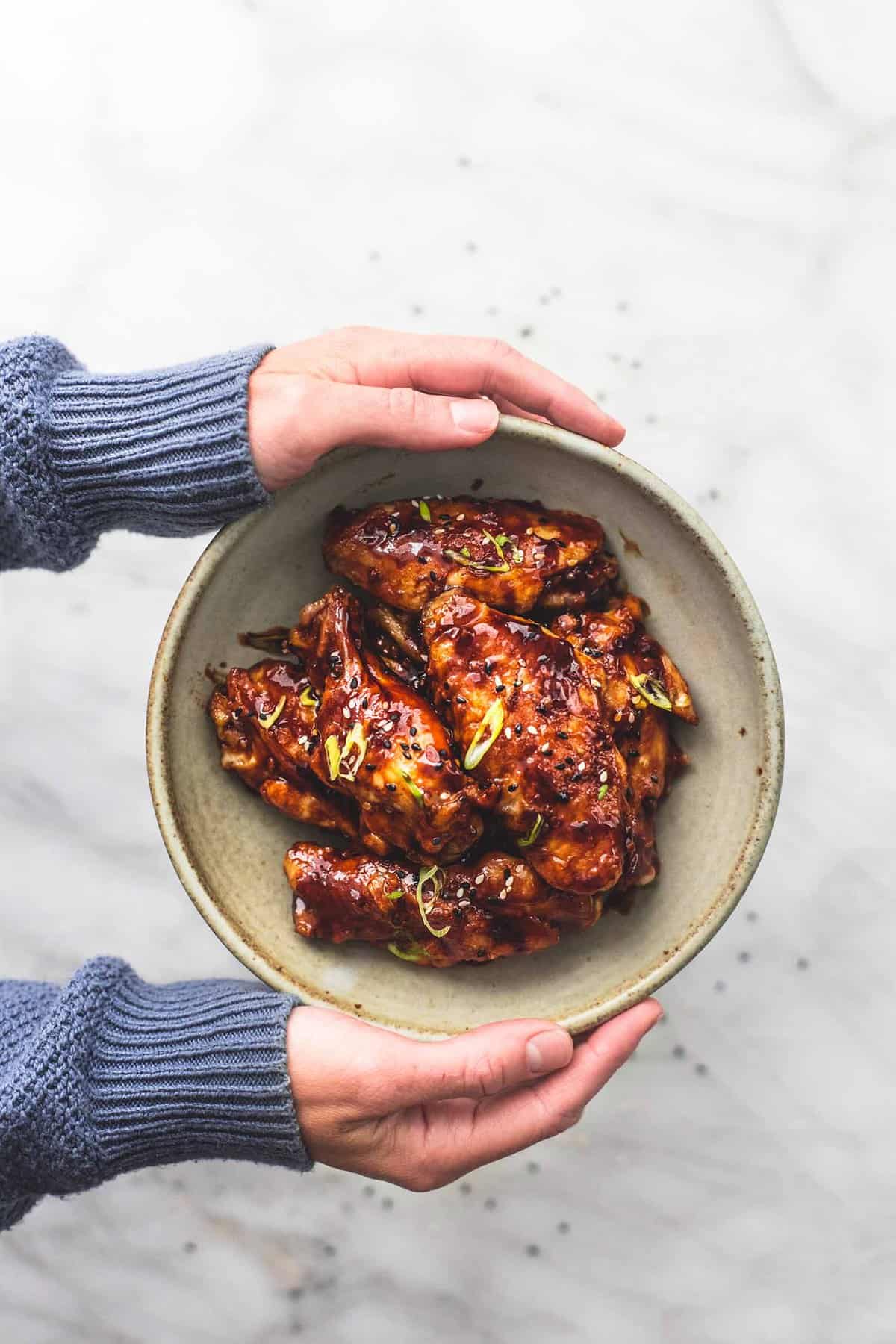 WHAT DO YOU EAT WITH KOREAN BBQ?

If you want to stay on-theme, you can serve your Korean BBQ wings with other Korean-type dishes and/or condiments. Whenever I go to a Korean restaurant, I am usually served a variety of condiments in little bowls for eating before the food or as additional toppings to the dishes we ordered. Kimchi, pickled veggies, Gochujang (a red chili paste), spicy cucumber salad, seasoned soybean sprouts, braised potatoes, and pretty much any Asian ingredient or small dish you like can be paired with these wings.

I also like to make bigger sides to accompany these spicy chicken wings and round out my meal like: 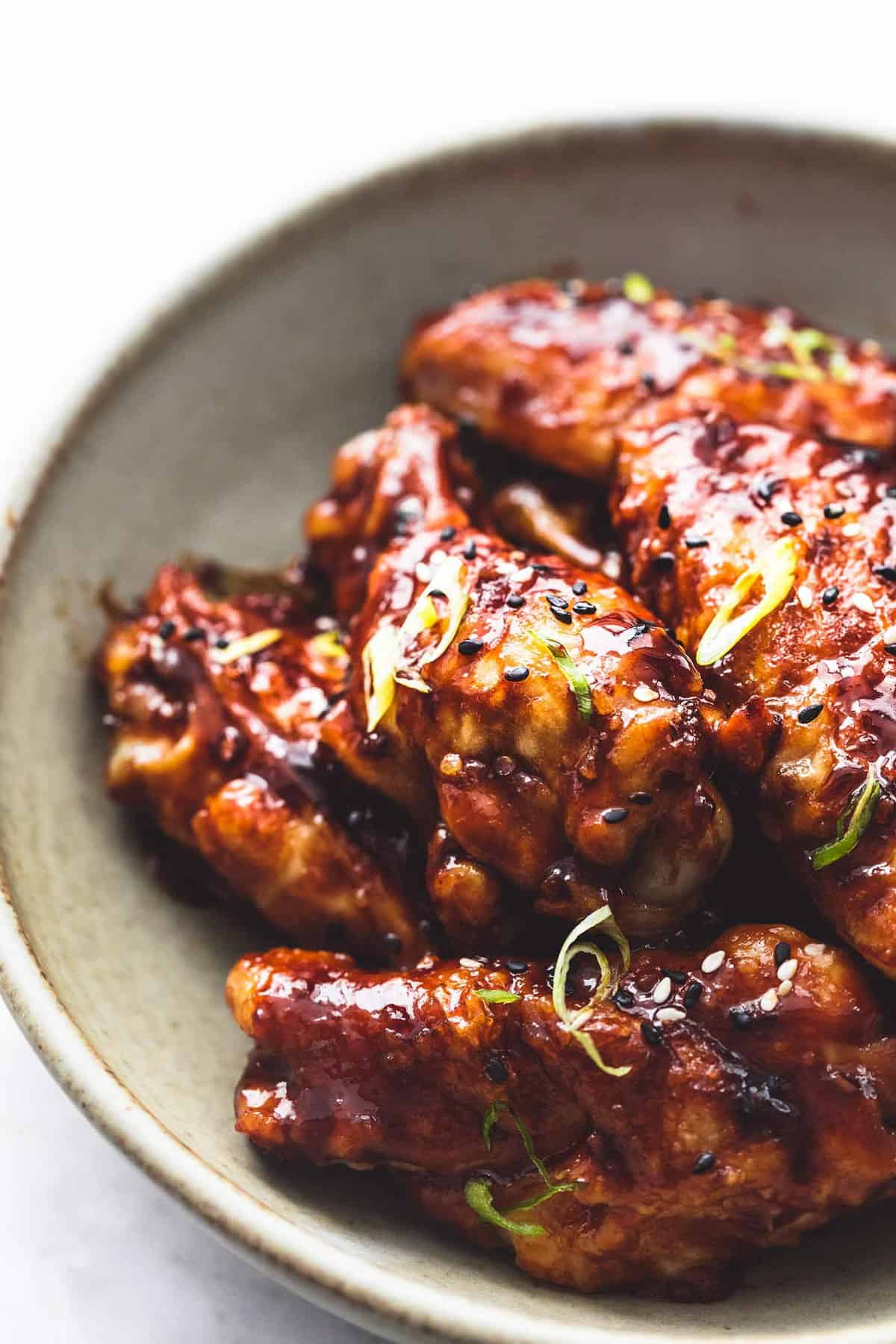 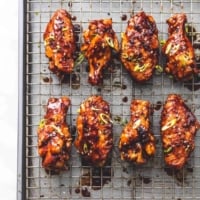 This recipe as written makes 1.5 pounds chicken wings - for me this was about 16 wings. At 2-4 wings each, this would serve 4-6 people as an appetizer.