Hands down the BEST, ultra tender pork tenderloin with a balsamic glaze made right in the pressure cooker. This Instant Pot Balsamic Pork Tenderloin will melt in your mouth and leave you craving more.

Well, this is that sort of recipe. Except I may have exaggerated slightly. This one doesn’t have that dramatic of a story but it was passed around and altered a bit before it got to me, and here I am altering it even further to make it work in a more modern kitchen appliance — the Instant Pot.

This Balsamic Pork Tenderloin recipe initially came from my aunt, who passed it along to my mother, who made it quite often when I was growing up. It is a recipe for a baked pork tenderloin covered in balsamic glaze. I’m not sure how my mom tweaked it exactly but I know that she did — she always had just the perfect spin to put on any recipe.

While I’ve made this recipe plenty of times as instructed, I always wondered how it would work in the Instant Pot. After all, I’ve used this fast-cooking method for many other versions of pork and chicken, and I figured it would be a cinch to adapt around our fast-moving lifestyle. I love being able to eat the classic recipes I grew up eating but I also love cutting the cooking time.

As I mentioned, this pork recipe originally was made to be baked in the oven. If you would prefer to make it that way, simply bake the oiled and seasoned tenderloin at 375 degrees for 35-40 minutes. You’ll make the glaze in a saucepan on the stove while the meat cooks. You’ll want to adjust the water added to the vinegar to ⅔ a cup instead of 1 cup.

I also think that the pork tenderloin benefits from a good sear on the stove before being baked in the oven but that’s totally optional. Searing it before baking seals in the flavors of the pork and gives it that nice “crust” on the outside. To save on dish washing, use an oven-safe pan to sear the pork (like cast iron or enamelware) that you can take from stove to oven.

What Is The Difference Between a Pork Loin And A Pork Tenderloin?

Although at first glance, these two cuts of meat might seem interchangeable, they are not.  A pork tenderloin is thinner and smaller and a loin is very big and wide and steak-like — the loin is where pork chops are cut from.

You also cook these two pieces of meat differently. (And they’re not interchangeable.) A pork tenderloin is great for marinades and slow cooking. A pork loin is great on the grill or cooked on the stove but can be easily overcooked.

Either way, you want to make sure that your pork is cooked thoroughly before you eat it. If you’re not sure if it’s done, use a meat thermometer. It should read 145 degrees at its thickest point to be considered cooked through.

Is Pork Tenderloin Good For You?

What To Serve With This Recipe? 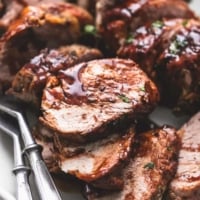 One large or two small-medium pork tenderloins (1 – 1 1/2 pounds each) work perfectly. You can also do one small-medium tenderloin but will have extra balsamic glaze leftover – you can keep it in a jar in the fridge for up to 2 weeks and reheat in the microwave or on the stove.  In place of the dried herb blend you can substitute 1 teaspoon dried thyme + 1 teaspoon dried basil + 1/4 teaspoon dried rosemary.